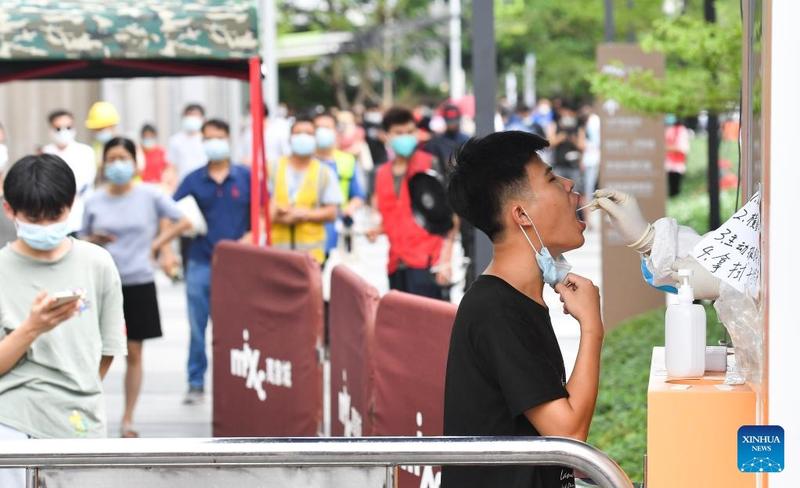 Nine provincial-level regions in China have each reported more than 100 COVID-19 cases since August, with over 2,000 infections in Hainan, said Mi Feng, spokesperson for the National Health Commission (NHC).

The pandemic situation in provincial-level regions like Xinjiang, Inner Mongolia and Guangdong is evolving rapidly, Mi said, cautioning about the risk of community spread.

The NHC spokesperson added that the recently reported cases in the Tibet autonomous region also pose a high risk of spread.

The pandemic situation in some provincial-level regions that previously reported infections has been brought under control, according to Mi.

Noting that working groups have been dispatched to affected regions to aid containment efforts, Mi reiterated the importance to guard against imported cases and domestic resurgence and adhere to the dynamic zero-COVID policy.

As of Tuesday, 3.427 billion COVID-19 vaccine doses had been administered on the Chinese mainland. Nearly 239 million elderly people aged 60 or above had been vaccinated against COVID-19, the NHC spokesperson said.

Meanwhile, the Chinese mainland on Wednesday reported 614 locally-transmitted confirmed COVID-19 cases, of which 559 were in Hainan, the NHC said Thursday.

Altogether 1,379 local asymptomatic carriers were newly identified on the day, including 805 in Hainan and 380 in Xinjiang Uygur autonomous region, said the commission in its report.

A total of 125 COVID-19 patients were discharged from hospitals after recovery on the mainland on Wednesday.

The total number of COVID-19 patients discharged from hospitals after recovery reached 224,112 on the mainland as of Wednesday.

Wednesday saw no new deaths from COVID-19, with the total death toll at 5,226, according to the commission.