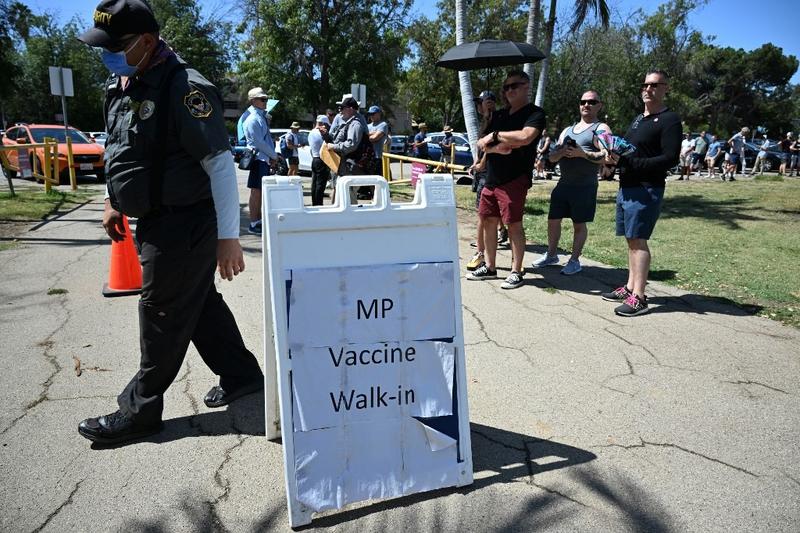 People wait in line to receive the monkeypox vaccine at the Balboa Sports Center in the Encino neighborhood of Los Angeles, California on July 27, 2022. (ROBYN BECK / AFP)

The United States has declared monkeypox a public health emergency, the health secretary said on Thursday, a move expected to free up additional funding and tools to fight the disease.

The declaration will improve the availability of data on monkeypox infections that is needed for the response, US Centers for Disease Control and Prevention Director Rochelle Walensky said

The US tally topped 6,600 on Wednesday, almost all of the cases among men who have sex with men.

"We're prepared to take our response to the next level in addressing this virus, and we urge every American to take monkeypox seriously," Health and Human Services Secretary Xavier Becerra said at a briefing.

The declaration will improve the availability of data on monkeypox infections that is needed for the response, US Centers for Disease Control and Prevention Director Rochelle Walensky said, speaking alongside Bacerra.

The US government has come under pressure for its handling of the outbreak.

The disease began spreading in Europe before moving to the United States, which now has the most cases in the world. Vaccines and treatments have been in short supply and the disease often left for historically underfunded sexual health clinics to manage.

The World Health Organization declared monkeypox a "public health emergency of international concern," its highest alert level. The WHO declaration last month sought to trigger a coordinated international response and unlock funding to collaborate on vaccines and treatments.

Governments are deploying vaccines and treatments that were first approved for smallpox but also work for monkeypox.

The US government has distributed 600,000 doses of Bavarian Nordic's  Jynneos vaccine and deployed 14,000 of Siga Technologies' TPOXX treatment, officials said, though they did not disclose how many have been administered.

US Food and Drug Administration Commissioner Robert Califf said the agency was considering freeing up more Jynneos vaccine doses by allowing doctors to draw 5 doses of vaccine from each vial instead of the current 1 dose by using a different subcutaneous method of inoculation.

First identified in monkeys in 1958, the disease has mild symptoms including fever, aches and pus-filled skin lesions, and people tend to recover from it within two to four weeks, the WHO says. It spreads through close physical contact and is rarely fatal.

Anthony Fauci, Biden's chief medical adviser, told Reuters on Thursday that it was critical to engage leaders from the gay community as part of efforts to rein in the outbreak, but cautioned against stigmatizing the lifestyle.

"Engagement of the community has always proven to be successful," Fauci said.