UN: Details for Ukraine grain shipments still being worked out 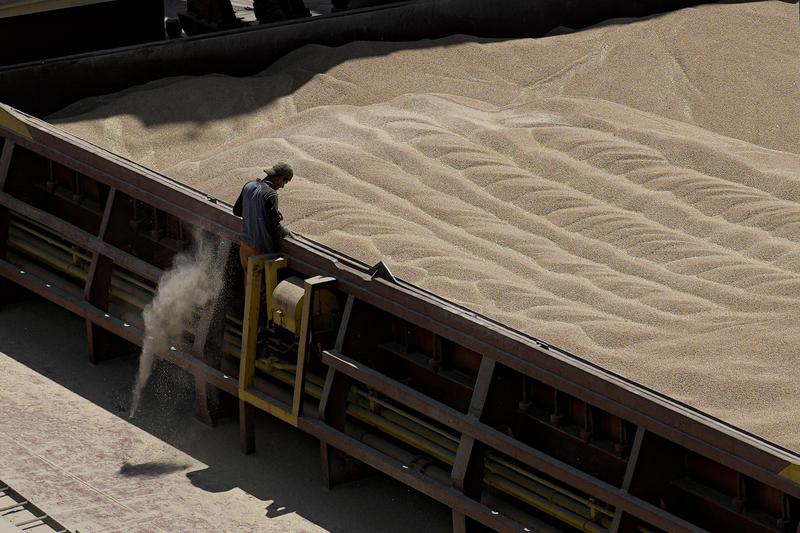 An employee of the Romanian grain handling operator Comvex oversees the unloading of Ukrainian cereals from a barge in the Black Sea port of Constanta, Romania, June 21, 2022. (VADIM GHIRDA / AP)

UNITED NATIONS - UN aid chief Martin Griffiths said on Thursday he was hopeful that the first shipment of grain from a Ukrainian Black Sea port could take place as early as Friday, but "crucial" details for the safe passage of vessels were still being worked out.

Griffiths said Turkish, Russian and Ukrainian military officials were working with a UN team at a Joint Coordination Center in Istanbul to hammer out standard operating procedures for the deal agreed by the four parties last Friday.

"That is a detailed negotiation based on the agreement," Griffiths told UN member states in a briefing on Thursday. "But without those standard operating procedures we cannot manage a safe passage of vessels."

"We don't see any scale likely to happen ... without our procedures being clear, understood by the commercial sector," he later told a news conference.

Shipping companies and the insurers that cover vessels need to be assured that the journey is secure with no threat of mines or attacks to both the ships and their crews. These are typically covered in accepted maritime practices known as standard operating procedure

He acknowledged that "the devil was in the details," but said so far no major issues had emerged. Griffiths said one aspect being negotiated is the exact coordinates of the safe shipping channels.

Shipping companies and the insurers that cover vessels need to be assured that the journey is secure with no threat of mines or attacks to both the ships and their crews. These are typically covered in accepted maritime practices known as standard operating procedure.

"It's not just a matter of whether there is a ship, or two, or three available in the ports ready to move out. They need to move safely and that means that we have to be clear where exactly the channel is," Griffiths said.

The agreement aims to allow safe passage for grain shipments in and out of Ukrainian ports, blockaded by Russia since its Feb 24 military operation. Russia has blamed Ukraine for stalling shipments by mining the port waters.

"We are hopeful ... for the first ship movements to take place within days – hopefully tomorrow – out of those ports," Griffiths said.

While Griffiths stressed that the operation to resume Ukraine grain exports was commercial - not humanitarian - he said the United Nations hoped poorer countries would be given priority, specifically citing Somalia, where nearly a quarter of a million people are facing starvation.

The head UN official at the Joint Coordination Center, Frederick J. Kenney from the International Maritime Organization, had a meeting with insurers and shipping companies on Wednesday, Griffiths said.

"I'm told that it was very encouraging set of conversations," he said. "It is commercially viable."

Ships going in to collect grain will be inspected by the Joint Coordination Center at a Turkish port "to ensure there's no contraband, no weaponry going in on these vessels," Griffiths said. A UN spokesperson at the center said those checks would likely occur at an anchorage north of the Bosphorus.

UN and Turkish monitors in Ukraine's Odesa port will then make sure that grain is loaded on to the ships. Another inspection by the Joint Coordination Center after a ship has left Ukraine will only be warranted if it strays from the agreed plan, Griffiths said.

He said they knew from early on in negotiations that de-mining the approaches to Ukrainian ports was not going to work because it would take too long - UN mine officials had estimated it would take at least four months to do properly.