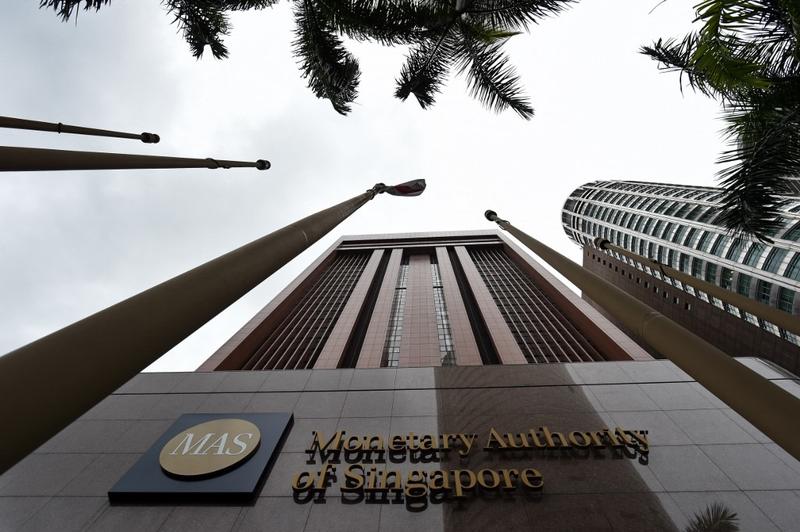 The Monetary Authority of Singapore building is seen in Singapore on May 30, 2017. (ROSLAN RAHMAN / AFP)

SINGAPORE – Having bucked a global dash to tighten monetary policy for a year, Asian central banks find themselves scrambling to catch up in order to tackle rising inflation and defend weakening currencies.

Market analysts suspect Indonesia, the last remaining dove in emerging Asia, may be the next to move by pushing interest rates higher on Thursday, as policymakers rush to convince investors they are tackling rising prices.

Singapore and the Philippines surprised markets with unscheduled tightening announcements last week, underlining the growing urgency among policymakers to act.

Asia has lagged as the rest of the world, including emerging markets, began lifting rates as early as last June, after the US Federal Reserve kicked off an accelerated timeline for its policy tightening.

While relatively subdued inflation allowed central banks in Asia to remain dovish in a bid to support the post-pandemic economic recovery, that led to weakening currencies and capital outflows, even as Russian special military operation in Ukraine exacerbated price pressures globally.

The climb in inflation has been quite rapid. It was unusually fast ... And many thought the bigger risks were on the downside on growth and so did not see this coming.

“Have central banks been too slow to act? Yes, I know, it's a common question," Ravi Menon, managing director of the Monetary Authority of Singapore, said at a conference on Tuesday.

"And I don't want to sound defensive on behalf of my colleagues elsewhere, but very few people saw this coming. The markets didn't see it.

"The climb in inflation has been quite rapid. It was unusually fast ... And many thought the bigger risks were on the downside on growth and so did not see this coming."

Currencies and bonds have borne the brunt. Among the worst hit, the Philippine peso is down more than 10 year-to-date, and just off a nearly 17-year low of 56.53 per dollar. Yields on the country's government bonds have spiked about 200 basis points (bps) since the start of the year.

The Thai baht has fallen more than 10 percent this year, and Thailand snapped a five-month streak of foreign investment into equities to lose $816 million in June.

A large part of the selling has been a response to rising Treasury yields and the US dollar – factors beyond domestic policymakers' control, giving Asia an excuse to hold off on rate hikes.

But central banks are suddenly finding they can no longer ignore rising food and oil prices. Thailand and Indonesia saw inflation hit multi-year highs this month.

"What I suspect they’re doing at this stage is really (to) still focus on fighting inflation for the next few months, because that’s where the concern is," said Euben Paracuelles, chief ASEAN economist at Nomura.

Rising global headwinds and the risk of recession in major economies complicated the policy challenge at a time when inflation was at the start of a sharp pickup in Southeast Asia, he said.

India, which first saw its central bank raising rates by 40 bps in an off-cycle move in May, has logged six straight months of foreign investor equity outflows, contributing to a record drop in the rupee.

The historically volatile Indonesian rupiah is actually only down around 5 percent versus the dollar for the year, although it saw its largest monthly fall of 2.2 percent in June.

It has to some extent been helped by resource-rich Indonesia's improved trade position and the fact foreigners now hold less than a fifth of its high-yielding bonds.

Others, such as the Philippines and Thailand, are far more vulnerable owing to their current account deficits and, in the latter's case, reliance on a tourism sector still struggling following the COVID pandemic.

"Indonesia has been, for the most part, able to hold off on rate hikes. But I actually think they’ll hike ... just because everybody has tightened already," said Nicholas Mapa, senior economist at ING.

A senior director at the Bank of Thailand said last week that the central bank is highly likely to raise its key policy rate in August, adding that the bank is ready to intervene if the baht weakens too much.

"At the end of the day, we are dealing with a much tighter global monetary policy landscape, so there's definitely compulsion for central banks in general to raise rates," said OCBC economist Wellian Wiranto.