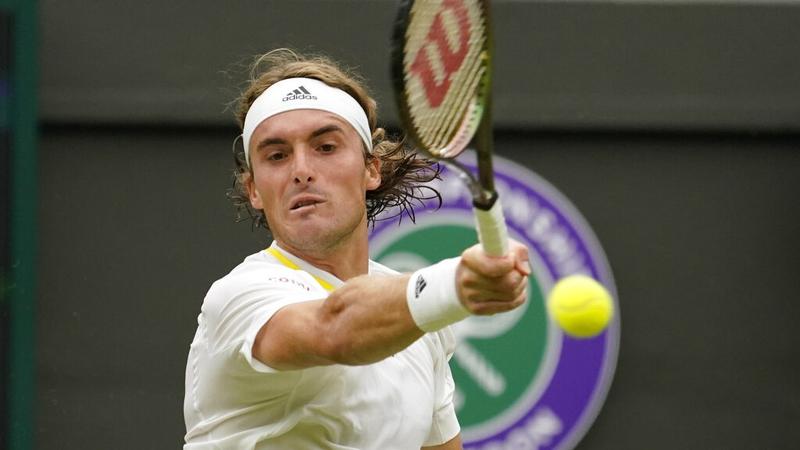 Greece's Stefanos Tsitsipas returns to Australia's Jordan Thompson in a second round men's singles match on day four of the Wimbledon tennis championships in London on June 30, 2022. (ALBERTO PEZZALI / AP)

LONDON - Stefanos Tsitsipas' new-found love for grass will face a stern test when the Greek fourth seed faces red-hot Nick Kyrgios in their third-round showdown at Wimbledon on Saturday.

Tsitsipas won his maiden grasscourt title in Mallorca last week and has carried that form into Wimbledon, showing glimpses of the quality that has helped him triumph on other surfaces.

In fiery Australian Nick Kyrgios, Stefanos Tsitsipas faces a player who relishes playing on grass and has been in dazzling form himself, firing 24 aces and 50 winners in his straight-sets demolition of Filip Krajinovic in the previous round

But in fiery Australian Kyrgios, Tsitsipas faces a player who relishes playing on grass and has been in dazzling form himself, firing 24 aces and 50 winners in his straight-sets demolition of Filip Krajinovic in the previous round.

"Nick has more matches on me in these courts. He claims to like grass. I think his game is good for the grass," Tsitsipas told reporters after his win against Jordan Thompson.

"I'm going to try and concentrate on doing my thing and pay attention to my own game from start to finish. Hopefully I can stay there and do something great."

The two met in Halle leading up to Wimbledon, with the Australian coming out on top and improving his head-to-head record against Tsitsipas to 3-1.

"We're two of the biggest stars in the sport. Hopefully if we both bring our best tennis, it's going to be amazing to watch," said Kyrgios.

On the women's side, young American talents Coco Gauff and Amanda Anisimova collide on the big stage for only the second time, with the winner likely to fancy their chances of going deep in the tournament given how the draw is shaping up.

Rivals on the junior tour, their trajectories have followed a similar path, with Gauff, 18, reaching the final at this year's Roland Garros, where the 20-year-old Anisimova first made her mark with a run to the last four in 2019.

On the other side of the generational divide, 32-year-old Petra Kvitova continues her quest for a third Wimbledon crown against Spanish fourth seed Paula Badosa, who will be looking to reach the last 16 for the second year in a row.

"I just practised with her in Eastbourne before the tournament started. Pretty aggressive from both sides," said Kvitova.

"That's what I'm going to for sure be ready for. Big serves, great returns. She tries to play aggressively. But I think still that she likes more hard court and clay than the grass. Hopefully that could be my advantage a little bit."