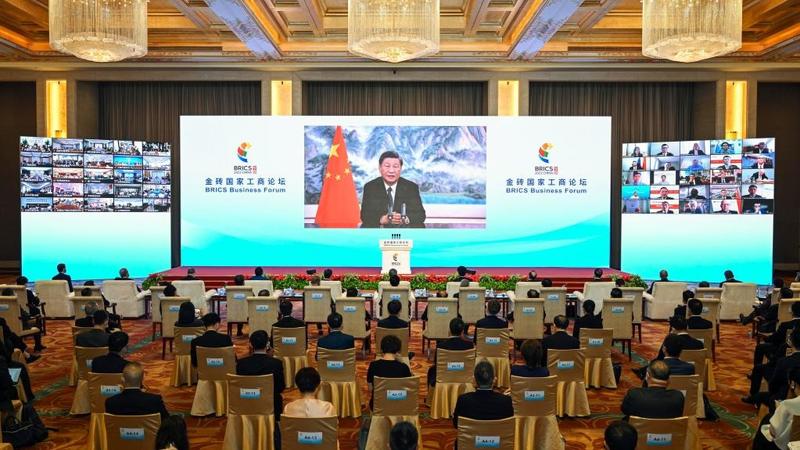 President Xi Jinping’s keynote speech on June 22 at the BRICS Business Forum can be summarized as a sincere proposal and commitment for sustainable peace and prosperity.

This is not the first time Xi has urged the world to strive for peace and prosperity, for people and nations. Wherever possible, he has taken a similar message to UN platforms, regional associations, and regional, bilateral and national forums.

President Xi proposed that we must try to forge partnerships based on the principles of win-win cooperation. We must create a new world order with the core values of justice, fairness and respect for everyone

It is apparent he believes that without ensuring peace and prosperity the world cannot achieve the goal of a community with shared future. His conviction and commitment to a shared future achievable only through cooperation is most evident.

Historical data shows it is cooperation that has helped the world to overcome many challenges. The World Bank has pointed out that from 1970 to 2015, world GDP grew 25-fold due to globalization. In monetary terms, it increased from $2.96 trillion in 1970 to $74 trillion in 2015.

The world was also able to halve poverty (from 1.9 billion people in 1990 to 689 million in 2019) and food insecurity. Unfortunately, despite the huge benefits of cooperation and economic links, our world is often distracted and pulled in other directions.

President Xi rightly identified the problems, and their causes. He summed up the current contradictions as: peace or war; progress or regression; openness or isolation; and cooperation or confrontation. There is no denying that these contradictions have long haunted humanity – but in recent times the situation has been aggravated.

Trade wars, economic isolation through country-first slogans, and confrontation in the name of so-called human rights and democracy; these have become the new normal. Hegemonic aspirations and military bloc politics are igniting the flames of new conflicts and crises. The Ukraine crisis is the latest example.

The Ukraine-Russia conflict is an interesting case study of the West’s mentality and preferences. Analysis reveals the crisis has been designed and fueled to achieve three specific objectives. First, to weaken Russia by engaging in conflict and, by imposing sanctions, depriving Russia of economic opportunities. Second, to create disruption around corridors of the Belt and Road Initiative and therefore undermine China’s economic interests. Third, to push Ukraine into the Western bloc and sink Chinese investments in Ukraine.

However, many experts believe the West is adopting such tactics out of fear of losing hegemony and economic power. Western countries under the leadership of the United States are hell-bent on denting the global system, without realizing that the fall of the global system will mean disaster. No one will be a winner; everyone will lose.

We saw the worst impacts of such a mentality last century in two world wars which engulfed millions of human beings as well as destroying resources.

In this context, Xi’s advice, and his emphasis on abandoning the hegemonic mentality and aspirations, is completely rational. He asked the world to say goodbye to this mentality, as we cannot afford new world wars. He urged powerful countries to depart from the philosophy of “position of strength”, as it will not serve the purpose of peace and prosperity.

By citing historical lessons, he urged all to pursue and defend peace, at all costs, as it is the only way to secure sustainable prosperity. He reiterated the importance of the Global Security Initiative and its four pillars: the common, comprehensive, cooperative and sustainable security for lasting peace.

The Chinese president proposed that we must try to forge partnerships based on the principles of win-win cooperation. We must create a new world order with the core values of justice, fairness and respect for everyone. Further, the United Nations must be at the center of all international engagement and we should adhere to the core values and principles of the UN Charter.

This is not a choice; it is the need of the time. It is required to combat multifaceted challenges like food insecurity, energy security, health, COVID-19, and the existential threat of climate change.

However, the challenges are so huge that no single country or region can handle them alone. There is a need, therefore, to strengthen cooperation and avoid isolation or compartmentalization.

We should understand that small courts with high fences will not serve the purpose. Our world should promote trade, economic linkages, technology development and investment through the system based on the World Trade Organization. This will be a win-win proposition for everyone, and it is the prerequisite for tapping the world’s real potential. It will boost innovation, creativity, and global growth and development.

Xi urged the business community of the BRICS countries (Brazil, Russia, India, China and South Africa) to play their role in achieving the development agenda. He asked them to be partners in the New Industrial Revolution, strengthen cooperation on the digital economy, smart manufacturing, clean energy and low-carbon technology, and support the industrial upgrade and restructuring.

The speech echoes strongly in today’s prevailing global situation. It will give hope to developing countries and build on the positive image of BRICS.

The author is CEO of the Asian Institute of Eco-civilization Research and Development in Pakistan. The views do not necessarily reflect those of China Daily.