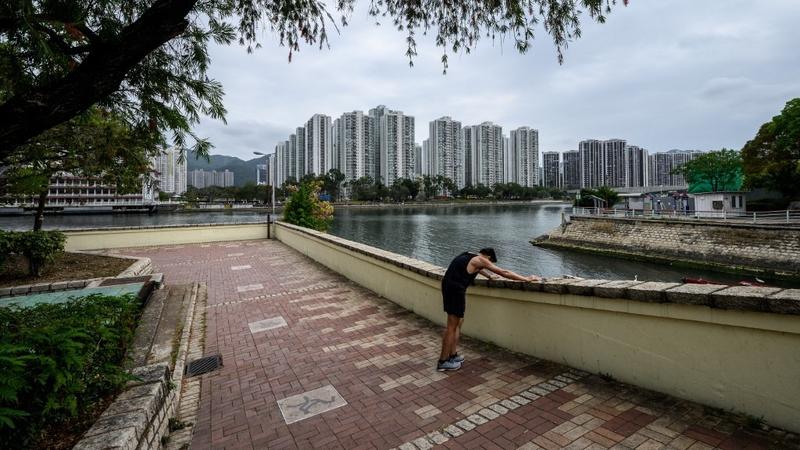 A man rests after exercising next to the Shing Mun River in Hong Kong on April 8, 2021. (ANTHONY WALLACE / AFP)

HONG KONG - Hong Kong reported 1,650 new COVID-19 cases on Thursday, including 27 from a newly detected cluster at a restaurant in Tuen Mun.

Chuang Shuk-kwan, head of the communicable disease branch of the Centre for Health Protection, said in a news briefing that the new cases involved 1,522 local infections and 128 imported cases. There was also one new reported death, bringing the city’s toll to 9,185 during the fifth wave.

Chuang Shuk-kwan, head of the communicable disease branch of the Centre for Health Protection, said in a news briefing that new cases included 1,522 local infections and 128 imported cases

Chuang said the new cluster at Victoria Harbour Restaurant involved 26 patrons who dined there after 6 pm on June 16 and one close contact.

“I think seven or eight families were having a meal at the place. Some were in small groups. Others were of a larger group,” Chuang said.

Two of the identified cases were suspected to have the infectious Omicron subvariant BA.2.12.1, she added.

Chuang said the CHP will check Vaccine Pass records to determine how many more patrons needed to be tested.

She said all persons who visited the restaurant on the evening of June 16 should undergo tests to find out if they were infected with BA.2.12.1. There were 38 new cases with this variant reported on Thursday, she added.

Chuang also said 135 students and 37 teachers from 155 schools reported being infected. A close contact of an infected member of the basketball team at St. Francis Xavier’s School in Tsuen Wan also tested positive.

Chuang said the basketball team has been put under quarantine while four residential care homes, including two in Tai Po and Tsuen Wan, each reported one COVID-19 case.

Hospital Authority Chief Manager Sara Ho said in the same briefing that the patient who died was an 80-year-old man who had hypertension, renal impairment, and other heart ailments.

“He was unconscious when he was admitted to the hospital. We found that the enzyme level in his heart had increased substantially. This might have something to do with his heart condition,” Ho said, adding that the case has been forwarded to the Coroner’s Court to determine his exact cause of death.

Ho said 513 COVID-19 patients were being treated in public hospitals, including 73 new patients.

Ten were in critical condition, including three in intensive care units, while another 10 were in serious condition, Ho added.

Meanwhile, a government spokesman said in a statement that Secretary for Constitutional and Mainland Affairs Erick Tsang Kwok-wai and Director of the Chief Executive's Office Chan Kwok-ki had tested positive for COVID-19 and are undergoing isolation according to CHP guidelines.

Tsang and Chan last went to work on June 22 and June 20, respectively. They wore masks and followed social distancing measures at work, including taking rapid antigen tests that had negative results. They have no recent travel history, the spokesman added.