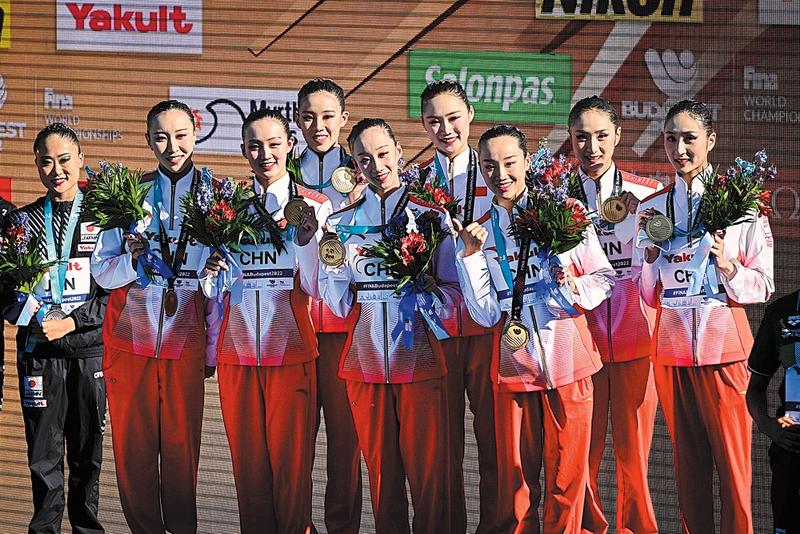 China's artistic swimmers pose with their gold medals after winning the team technical final at the 19th FINA World Championships in Budapest on June 21, 2022. (PHOTO / AP)

China had a big day at the FINA World Championships on Tuesday, scooping three medals and witnessing the rise of several young talents on the international stage.

With some of the country's established names coming up short in their gold hunt at the worlds, youngster Yang Junxuan stole the show on Tuesday by winning the women's 200m freestyle final in 1 min 54.92 sec to deliver China's first swimming gold at the Budapest worlds.

The 20-year-old Yang, who swam the opening leg of China's gold-winning 4x200m freestyle relay at last year's Tokyo Olympics, jumped out in front early and took command of the race to hold off Australian teenager Mollie O'Callaghan and bag her first individual title at the long-course worlds. 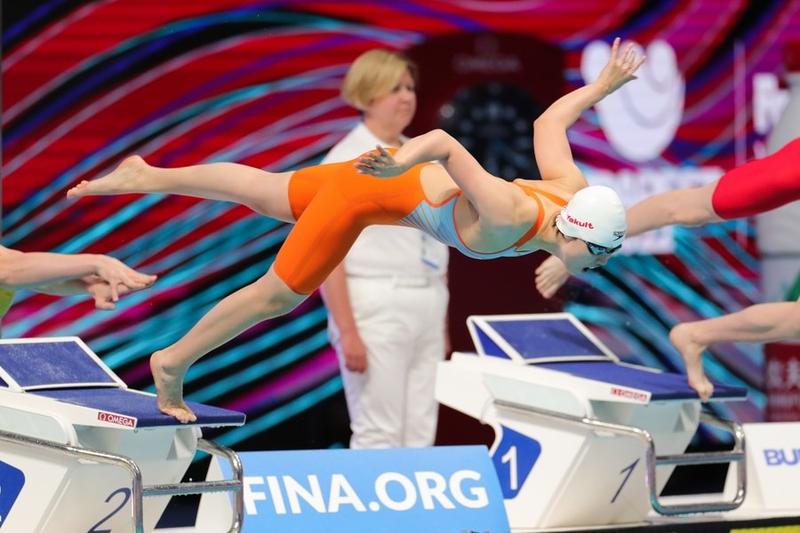 O'Callaghan pushed hard in the final 50m to win silver in 1:55.22, while another young Chinese, Tang Muhan, who was also a member of the triumphant 4x200m free relay squad in Tokyo, fought back from the bottom of the field after the first 100m to finish third in 1:56.61 and claim bronze.

Despite thrilling fans back home in the early hours of Wednesday, the level-headed Yang was keen to keep her victory in perspective.

"Some of the world's best in this event did not come to compete here, giving me the chance to go for it," said Yang, who was the only swimmer in Tuesday's final to crack the 1:55 mark.

"I wasn't expecting to win before the race because I wasn't at my best physically. I just focused on executing all the details as best I could, like my turns and each stroke. This is where I feel the gap between me and the world's best is."

The women's 200m free field had a long list of high-profile absentees, including Australia's Olympic champion Ariarne Titmus, who decided to skip the meet to focus on the Commonwealth Games, short-course world-record holder Siobhan Haughey of Hong Kong, who was sidelined by an ankle injury, and American great Katie Ledecky, who has opted to only swim the longer free events.

"The overall level of competition this time wasn't quite as high as it should have been due to the lack of the event's big names," said Wu Peng, a former men's short-course world champion in butterfly and guest commentator with China Central Television.

"Neither Yang nor Tang were at their best. Yet, to go out there and emerge victorious under a major spotlight is still a great learning curve for these youngsters," he said.

The Budapest meet is just the second time Yang has competed at the long-course worlds, so the gold is a significant boost to her promising career, which has already seen her claim titles at the short-course worlds, Asian Games, several World Cup meets and the Youth Olympic Games, all in 2018. 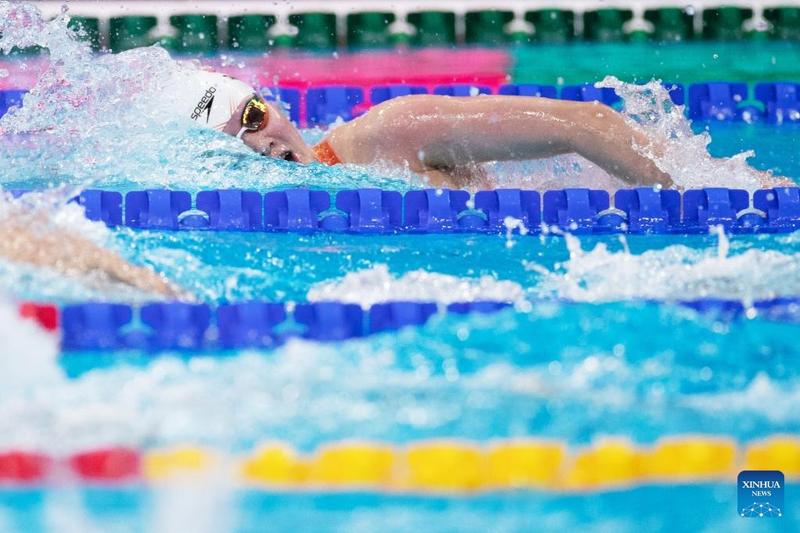 "Overall, it's been the best outcome I could possibly have, given that I am not in peak form, and the whole experience is invaluable," said the native of Shandong province.

Pan's emergence in the sprint discipline, where former world champion Ning Zetao created the previous national record at the 2014 Asian Games, in his worlds debut has rekindled hope for more men's success in the pool after the retirement of Ning and the ban of Sun Yang for a doping-rule violation. 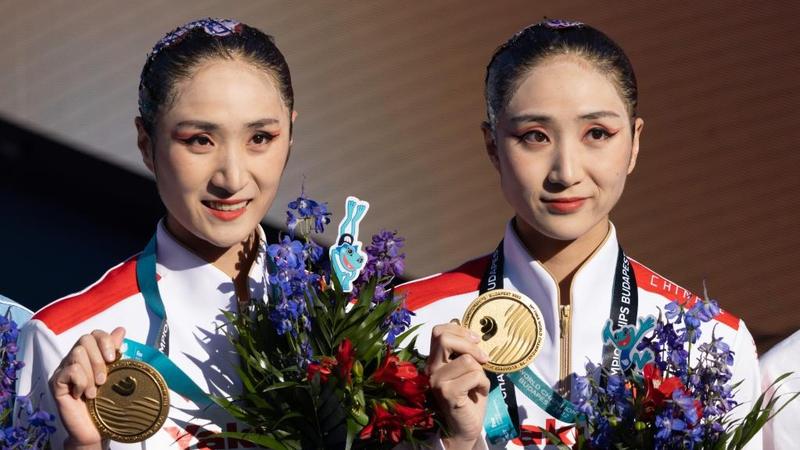 Led by twin sisters Wang Liuyi and Wang Qianyi, who won gold in the technical duet on Sunday, the Chinese squad performed a high-difficulty routine that featured high-flying lifts and impressive synchronization to earn the nod from the judges, delivering the first gold in the Olympic discipline which has been long dominated by Russia.

"This is definitely a big breakthrough since China's artistic swimming team was founded in 1983," head coach Zhang Xiaohuan told Xinhua.

"The enemy is ourselves. I asked them to deliver their best. We had really hard training over the past seven months and it's all deserved," Zhang added. 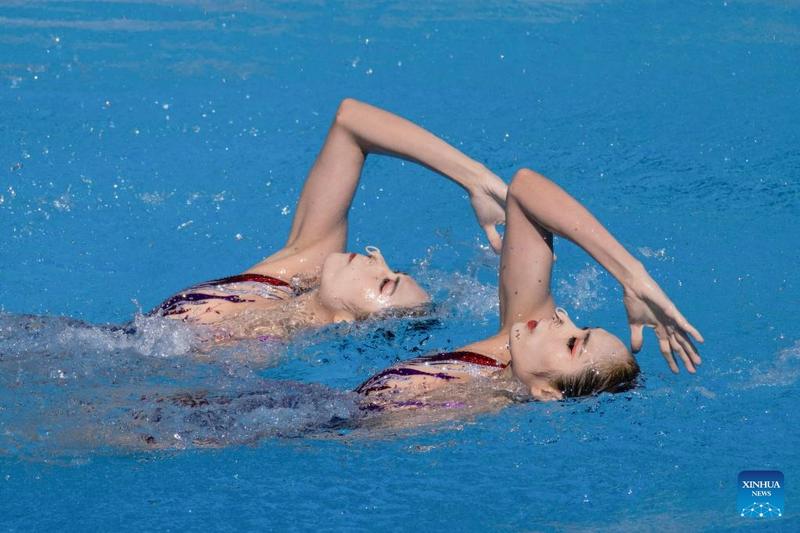 With a total of six medals, China sat third in the standings by Tuesday night, behind second-placed Italy and the table-topping US.

China's successes have been offset by a number of big-name disappointments in the Hungarian capital. Wang Shun, the Olympic men's 200m individual medley champion, finished bottom in his semifinal group on Tuesday to miss Wednesday's final after swimming a subpar time of 2:01.35. That came two days after two-time backstroke world champion Xu Jiayu failed to qualify for the 100m final, usually considered his strongest event.