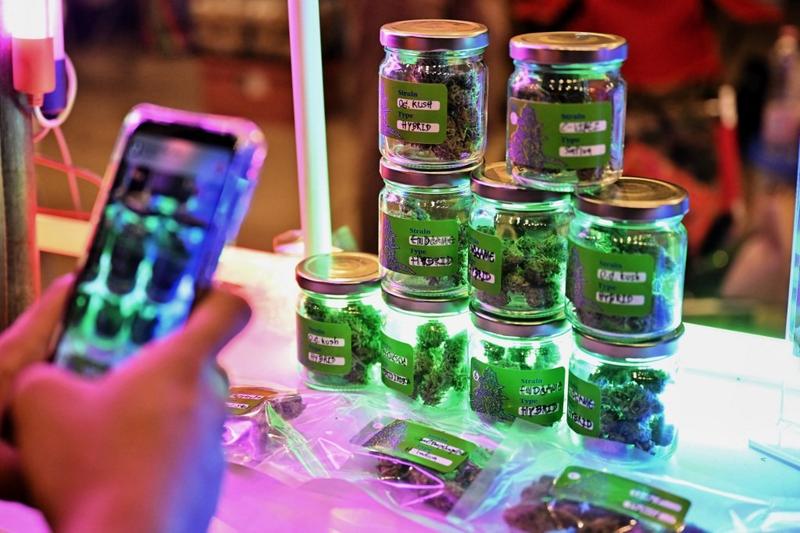 Vendors sell strains of cannabis to celebrate the legalization of cannabis at the “Thailand: 420 Legalaew!” weekend festival hosted by Highland in Nakhon Pathom province on June 11, 2022. (LILLIAN SUWANRUMPHA / AFP)

BANGKOK – For Jiratti Kuttanam, Thailand's relaxation of cannabis restrictions meant one thing above all – a cheaper supply of the products she uses to manage the pain and sickness caused by her breast cancer treatments.

Jiratti, 42, said she and other patients would also feel the benefits closer to home.

Medical marijuana has been legal there since 2018. But, before the law change, she had to rely on pricy foreign imports. Some patients went to illegal dealers.

I think you need education. You need to study how to use it ... the right way.

Imported cannabis buds used to cost up to 700 baht ($20) per gram, but prices have since halved, Jiratti said.

New Thai regulations to control use of cannabis come into effect a week after legalization.

"I've been taking cannabis regularly so I don't have to feel pain," she said as she shredded and boiled marijuana leaves to make infused tea, filling her one-bedroom Bangkok apartment with its distinctive smell.

She was diagnosed with advanced stage breast cancer five years ago. Two years later she started using cannabis oil and other products to ease the pain, vomiting, fatigue and anxiety she suffered after chemotherapy.

A legal, local crop would mean a more reliable supply of those products - a good thing as long as patients know how to use them, she said.

"I think you need education. You need to study how to use it ... the right way. It can be harm(ful). It can be dangerous as well, you know."

Thailand's relaxation of restrictions has not meant a total free-for-all. Last week, new regulations went into effect forbidding public smoking of cannabis as well as its sale to people under 20, pregnant women and breastfeeding mothers.