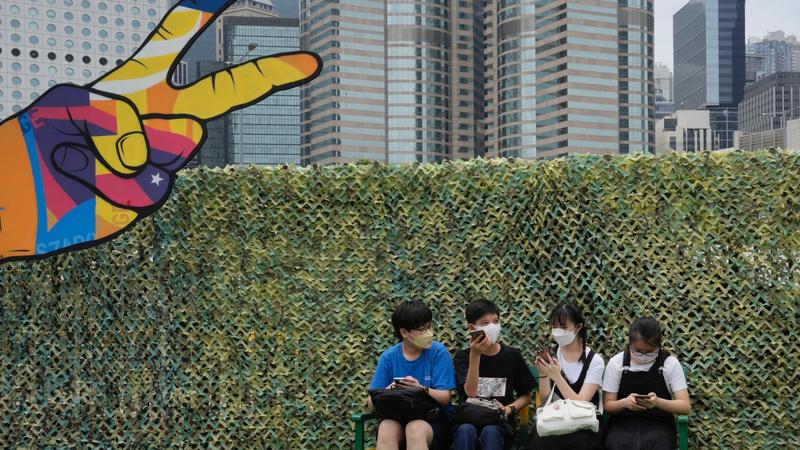 Teenagers wearing face masks, sit on a bench next to a cardboard featuring a victory sign at park in Hong Kong, May 9, 2022. (KIN CHEUNG / AP)

Chuang Shuk-kwan, head of the communicable disease branch of the Centre for Health Protection, said in a news briefing that 33 of the new cases were imported while 251 were local infections.

Chuang Shuk-kwan, head of the communicable disease branch of the Centre for Health Protection, said in a news briefing that 33 of the new cases were imported while 251 were local infections

She said that 116 cases were confirmed through nucleic acid tests and 168 by rapid antigen tests. Saturday’s figure is lower than the 298 infections logged on Friday, bringing the infection tally during the city's fifth wave of the pandemic to 1,195,116.

Chuang said 10 of the imported cases were detected at the airport, 22 found during quarantine, and one confirmed during testing on the 12th day after the patient’s arrival in Hong Kong.

The infections detected at the airport included three cases on Cathay Pacific flight CX288 from Frankfurt and two on Cathy flight CX495 from Taipei.

Chuang added that a 60-year-old woman from the United States also tested positive for the Omicron BA.4 subvariant at the airport, bringing the number of BA.4 subvariant cases in the city to three.

Chuang also said that the 11 new cases at the Chinese restaurant Sky Cuisine in Sheung Wan involved one staff member and 10 customers, bringing the number of cases in that cluster to 41.

“We have told them to suspend operations because we have to wait for test results. There was a large number of patrons infected. We need to wait for ventilation testing and environmental test results before we give them the green light,” she said.

Chuang said the infected diners came from 15 families and occupied 17 of the 29 tables on the third floor.

She added that environmental samples taken from the male toilet and the extractor fan in the female toilet also tested positive for the virus.

One of the patients from the cluster lived in West Terrace, Sai Wan Estate in Kennedy Town, where 22 cases had been found. A full genome sequencing analysis is being conducted to find out if the outbreak in the restaurant is related to the cases in the estate, Chuang said.

She also said that there were six new cases linked to the billiards center in Hung Hom, involving 2 staff members and four customers who had played darts.

One of the infected staff members was assigned at the bar and prepared food and drinks for patrons, Chuang said, adding that the cluster now had 12 cases.

She added that 755 COVID-19 patients were being treated at 19 public hospitals, the North Lantau Hospital Hong Kong Infection Control Centre, and the AsiaWorld-Expo community treatment center.

Three were in serious condition and one was in critical condition in an intensive care unit, Ho added.