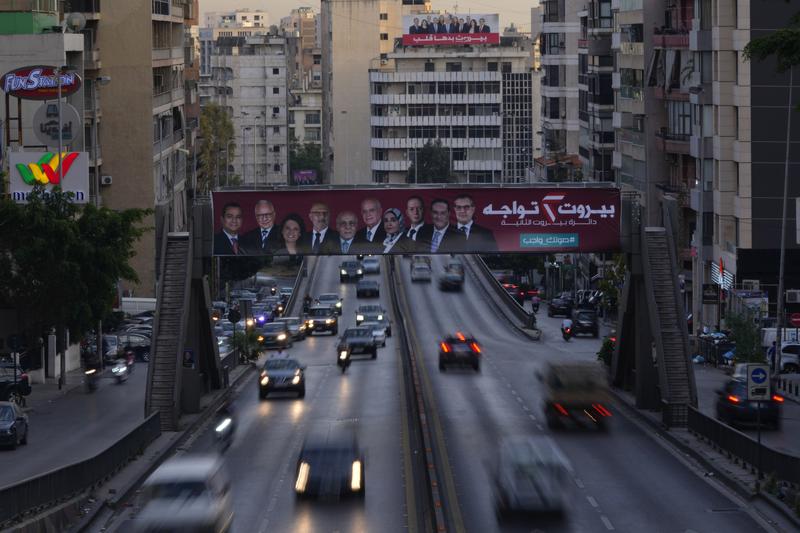 In this photo taken with slow shutter speed, cars pass under campaign posters for candidates in the upcoming parliamentary elections, in Beirut, Lebanon, May 9, 2022. (HASSAN AMMAR / AP)

HONG KONG – Lebanon's parliamentary elections on May 15 will play a crucial role in reversing the country's socioeconomic misfortunes, experts say, as some 3.7 million of its registered voters decide the fate of its 128-seat chamber.

The elections are the first since protests broke out in October 2019 over the Lebanese government's failure to address corruption issues, economic woes, and the devastating 2020 Beirut port explosion. The massive blast, caused by a warehouse fire, killed about 200 people and left 300,000 homeless.

Maroun Khater, associate professor at the finance department at Beirut's Saint Joseph University, said that despite all the challenges, the parliamentary elections are "a democratic event that marks Lebanon's identity" and are a "solid base for change".

"Elections will surely not be the magic solution that will be solving Lebanon's chronic and deep problems," Khater told China Daily. However, they coincide with "imminent political and economic challenges" that make them crucial, he said.

The new parliament, he said, will be responsible for forming a new government immediately and for electing a new president in October, adding that respecting the scheduled timeline of the two events "leads to political stability" – an "essential determinant of any new start".

What awaits Lebanon in the post-election stage is closely linked to what Lebanese are expecting from the parliament.

Lebanon has been rocked by political instability. For a time it went without a government after the resignation of caretaker prime minister Hassan Diab in August 2020 – only to be taken over by caretaker premier Saad Hariri, who quit in July last year. In September, Lebanese President Michel Aoun announced businessman-turned-politician Najib Mikati would be the prime minister.

The new set of elected Lebanese leaders will face the herculean task of lifting 74 percent of some 4 million population out of poverty, and lifting the nation's currency, which has lost 90 percent of its value.

On May 11, Olivier De Schutter, the United Nations Special Rapporteur on extreme poverty and human rights, blamed the destructive actions of Lebanon's political and financial leaders "for forcing most of the country's population into poverty" and called Lebanon a "failing state" for putting four in every five people in poverty.

Pierre El Haddad, founder and former chair of the Network of Organizational Development of Experts, a public policy advisory group based in Lebanon, said he is not expecting much from the elections, but hopes to see more participation from women and youth

"We just need the people to be liberated from the weight of the government," El Haddad told China Daily

"Economically, the new parliament is supposed have its efforts synchronized with the new cabinet in order to vote a complete recovery plan for Lebanon and to assure the legislative support needed," said Khater, at Saint Joseph University. "What awaits Lebanon in the post-election stage is closely linked to what Lebanese are expecting from the parliament."

Nagapushpa Devendra, a research scholar at the University of Erfurt in Germany, noted that for the first time in many years, Lebanese people "have alternative candidates" in the elections.

"The nationals as well as the expatriates have been galvanized by the cascade of crisis and are supporting independent candidates who are not associated with any sectarian and political elites, hoping for constructive reforms," Devendra told China Daily.

Lebanon has a sectarian system where the president is a Maronite Christian, the prime minister a Sunni Muslim, and the speaker of parliament a Shiite.

Devendra said another significant factor in the Lebanese election is the "influence of international communities" such as the International Monetary Fund and World Bank.

"Recently, Lebanon has signed a four-year deal with the IMF seeking $3 billion and is also negotiating a $150 million loan for food security. These deals have certainly boosted Lebanese people's morale, resulting in a high number of voter registrations," Devendra said.

"But if the political dysfunction and weak governance continue, it will severely affect the IMF and World Bank's willingness to bail out Lebanon from its economic woes," she added

On May 9, the World Bank approved a $150 million loan to help Lebanon fund wheat imports and to stabilize bread prices for nine months, Reuters reported.

The bread shortage has been exacerbated by the war in Ukraine, which supplies most of Lebanon's wheat, and by Beirut's inability to store wheat reserves since its largest silos were destroyed in the 2020 Beirut port explosion, the report said.

A total of 718 candidates, including 118 females, are running for the elections.

Overseas voting got underway on May 6 and May 8 and Hadi Hashem, director of expatriates at the Lebanese Ministry of Foreign Affairs, said on May 9 that around 60 percent of the 225,114 Lebanese voters registered abroad had voted.

Meanwhile, Lebanese President Michel Aoun told a visiting delegation from the International Organization of La Francophonie that the elections will be held in a "transparent and free atmosphere", according to a statement from his office.