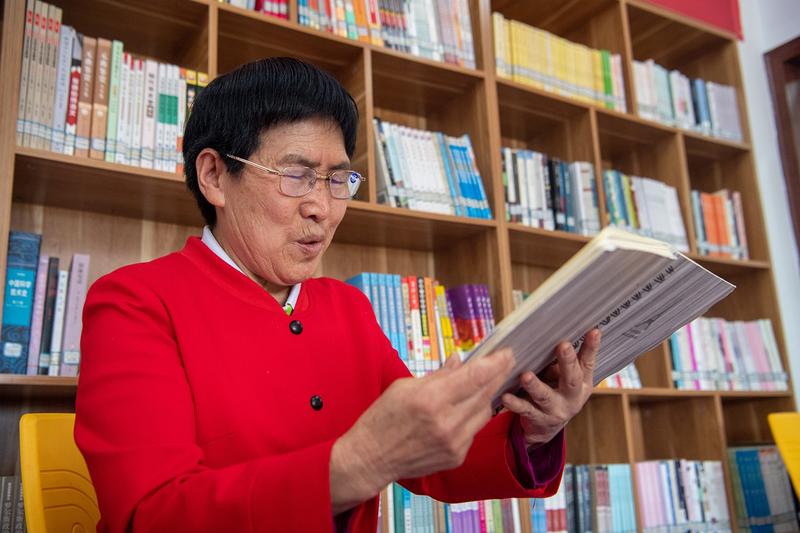 Tan Xiangying shares her thoughts at a reading salon with teachers and other family members of students at her grandchildren's primary school in April. (TANG YI / XINHUA)

CHONGQING－"Come on, time to go to school." Tan Xiangying, 70, would once urge her two grandchildren, but now it is the other way around－the kids remind Tan about her classes.

Thanks to a unique education model that is slowly gaining traction in the rural areas of Southwest China's Chongqing, children are enjoying a healthy family environment.

In 2019, Tan began attending a reading salon at the local primary school with her grandchildren under the initiative.

Organized by the primary school in Xituo township, Shizhu Tujia autonomous county, the weekly salon focuses on family education, emphasizing the important role of the parents in children's growth.

Tan's son and daughter-in-law work far away from home. To learn how to get along better with their two children, Tan joined the salon following her daughter-in-law's suggestion.

The reading salon focuses on specific topics for guardians, such as how to manage their emotions and how to get along with children. The adults read together and exchange their thoughts, while teachers deliver formal lectures.

Initially, many attendees, including Tan, were apprehensive about such a concept. "If they want us to teach our children or grandchildren, what will teachers do?" That was, initially, the prevailing thought among the locals.

According to the guardians, a teacher's job is to teach while guardians are obliged to just ensure the children's basic needs are fulfilled. 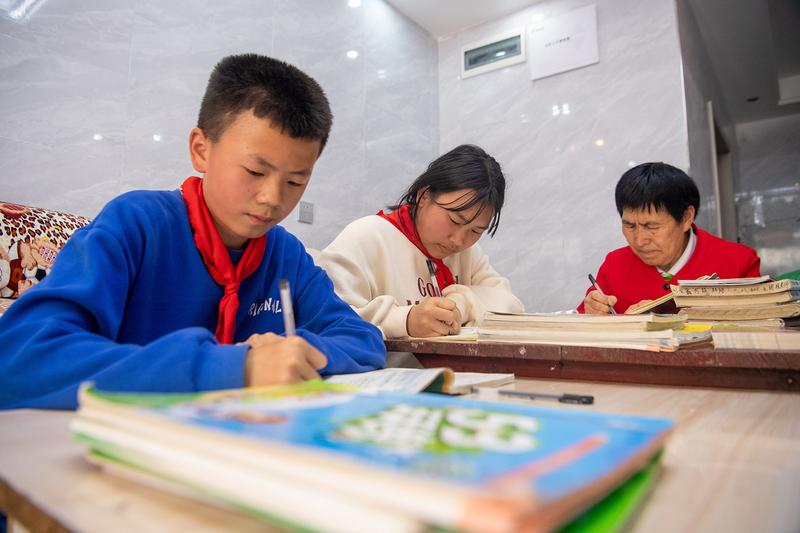 However, after the first session at the salon, Tan was shocked to realize how wrong she had been.

"I had no idea my every small move could have massive impacts on the children. I used to berate them frequently. However, I have tried to befriend them now," Tan says.

Liu Jinxin, Tan's granddaughter, says she has noticed significant changes in her grandmother. "She is more gentle now and often praises us."

Tan's mindset has undergone remarkable changes and she has immersed herself in the learning process. She dropped out of primary school at a young age and since then, most of her life has been about doing farm work and looking after cattle.

Thanks to this reading salon, Tan has rediscovered the joy of learning. From being a person who could barely write characters before, she has already filled six notebooks to document what the teacher said in the salon.

"I am so happy now. I never imagined that I could have such a wonderful school life," says Tan. She also invited more than 10 other elderly people to join the salon.

The reading salon was advocated by the newly released Family Education Promotion Law of China, which took effect at the beginning of this year.

The new law stresses that parents or other guardians need to promote the comprehensive and healthy growth of minors in moral quality, cultural accomplishments, behavioral habits, among other aspects.

As the first teacher in the school to give classes to the guardians of children, Cui Xiaolan says she and her colleagues are glad to see the law's promulgation, which proves the direction they have taken over the past seven years has been the right one.

In 2015, Cui found that many children in the school were "left-behind "as their parents left home to make a living. She realized how easily this may result in a lapse in family education, prompting her to organize such reading salons for the children's guardians.

Apart from elderly people like Tan, young full-time mothers are also among the attendees.

As Peng Dongqing, 33, didn't make it to college, her daughter had to bear the brunt of her anxiety. Peng was overly concerned about her daughter's grades and has constantly pushed her to go beyond her limits.

But after attending the salon, Peng realized that nobody is perfect, including her own child. "I need to care more about my daughter's happiness and focus on finding her talents in other fields, rather than only caring if she excels in the exams," she says.

In seven years, the number of participants in the reading salon has grown from 10 to over 500, and teaching sessions have been successfully held 158 times, Cui says.

This "guardian education" model has already been carried out in 89 public schools in Shizhu Tujia autonomous county.

"Be it theory, or in practice, a good education needs effort from both the school and the family. We hope every child can grow in a healthy environment filled with love," says Tan Lamei, deputy director of the county's education department.