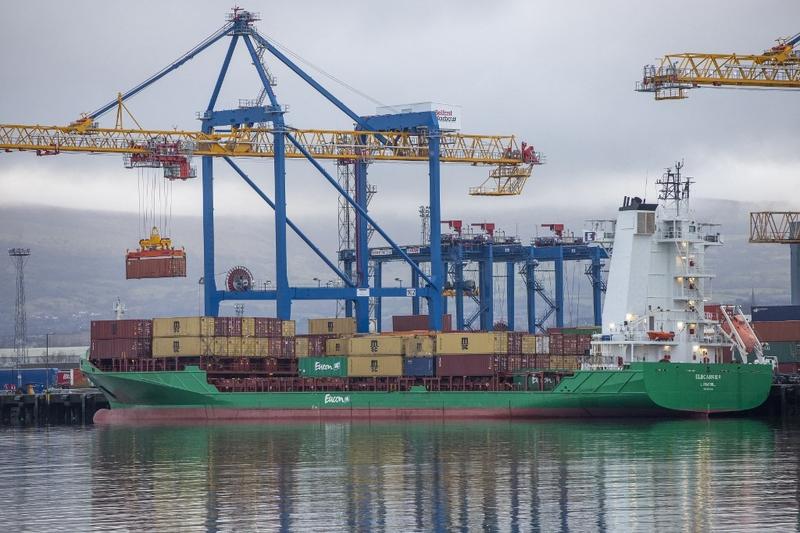 Container ship Elbcarrier is seen in the Belfast Harbour and docks area in Northern Ireland on Dec 11, 2020. (PAUL FAITH / AFP)

LONDON - The United Kingdom (UK) and the European Union (EU) disagreed on Thursday over how to fix Brexit's Northern Ireland Protocol problem. London said it "will have no choice but to act" if the EU does not show the "requisite flexibility" over the protocol.

In a telephone call with European Commission Vice President Maros Sefcovic, UK Foreign Secretary Liz Truss said her country's overriding priority was to protect peace and stability in Northern Ireland and that the protocol had become the greatest obstacle to forming a Northern Ireland Executive, according to a UK government press release.

In a telephone call with European Commission Vice President Maros Sefcovic, UK Foreign Secretary Liz Truss said her country's overriding priority was to protect peace and stability in Northern Ireland and that the protocol had become the greatest obstacle to forming a Northern Ireland Executive

Truss also "outlined why EU proposals would take us backwards, by creating more checks and paperwork," the press release said.

In a statement on Thursday, Sefcovic said it continues to be "of serious concern that the UK government intends to embark on the path of unilateral action."

"This is despite a series of wide-ranging and impactful solutions proposed by the EU, based on our intensive engagement with all representatives in Northern Ireland. These proposals would substantially improve the way the protocol is implemented," he said.

According to Sefcovic, "only joint solutions will work" and unilateral action is "simply not acceptable."

The UK-EU rift has recently deepened as rows continued over the protocol, under which Northern Ireland is part of the UK's customs territory but is subject to the EU's customs code, value-added tax (VAT) rules and single market rules for goods.

Despite the two sides' agreement in October 2019, the protocol has caused divisions over how some of the rules should be implemented, particularly for goods moving from Great Britain to Northern Ireland, according to an official report.

While British leaders have argued the protocol needs to be amended, the EU has said a renegotiation is off the table.

The need to find a solution has been made even more urgent after Sinn Fein, the Irish nationalist party, was on Saturday declared winner in elections for the devolved assembly in Northern Ireland and a system of power-sharing was introduced.

Coming second in the elections, the pro-British Democratic Unionist Party has indicated it would not sit in the assembly, citing its opposition to the protocol with a trade border down the Irish Sea.

On Tuesday, British Prime Minister Boris Johnson told his Irish counterpart, Micheal Martin, that the situation in respect of the protocol was now "very serious," according to an official press release.

The balance of the Belfast Agreement, which underpins Northern Ireland's peace, its constitutional settlement and its institutions, was being undermined and the recent elections had further demonstrated that the protocol was "not sustainable in its current form," Johnson said.

Despite efforts by the British government, "the European Commission had not taken the steps necessary to help address the economic and political disruption on the ground," according to the press release.

Over the past months, Britain left open the possibility that it may unilaterally impose "appropriate safeguard measures" in certain circumstances as the protocol provides in article 16. Reportedly, the country may legislate unilaterally to set aside parts of the protocol.

In response, EU leaders restated their opposition. "No one should unilaterally cancel, break or in any way attack the settlement we have agreed together," noted German Chancellor Olaf Scholz on Tuesday.

Amid the post-Brexit chaos, businesses have already felt the pain. Data published on Wednesday by the Institute of Directors, a British professional organization, showed only 27 percent of businesses which trade internationally expect to see an increase in imports in the next 12 months.

Emma Rowland, policy advisor at the organization, said it reflects uncertainty around global supply chain disruption, and the introduction of post-Brexit import controls. "Firms are burdened by bureaucracy, increased costs and delays at the border between the UK and the EU, and are calling for stability," Rowland added.

Border controls on products from the EU to Britain were tightened from this January, while more checks on EU goods were delayed at the end of April, including physical checks on meat and dairy. An official press release said the change is expected to save British importers at least 1 billion pounds ($1.2 billion) in annual costs.

This latest move was met with mixed reactions. "Our research has painted a clear picture that customs checks on goods and increased paperwork have damaged our exports to the EU, particularly from smaller businesses," said William Bain, head of trade policy at the British Chambers of Commerce.

"With food prices rising, the extra costs from new checks on meat, fish, dairy and other products would fuel inflation — hitting the pockets of both businesses and the British public," Bain added.

Some industries, however, found it disappointing. "Businesses need stability, clarity and certainty which constant delays and changes to the nature of future post-Brexit checks do not deliver," said Sarah Laouadi, head of international policy at Logistics UK, a British trade association.

"The government's wavering approach comes at the cost of logistics businesses who have invested time and money preparing for the introduction of checks," Laouadi added.

In January, the British government published a report titled "The Benefits of Brexit: How the UK is taking advantage of leaving the EU," noting that it was taking back control and managing its own money. But Brexit also took an economic toll in one way or another.

Brexit has affected British businesses' production, and the increase in Britain-EU trade barriers has led to a 6-percent increase in food prices in Britain between the end of 2019 and September 2021 in comparison to the years before December 2019, the British research organization "UK in a Changing Europe" said in April.

And since Britain's EU referendum, 44 percent of the largest British financial services firms have announced plans to move some British operations and/or staff to the EU, and the number of Brexit-related staff relocations to the EU was over 7,000 as March 2022 closed, according to consultancy group EY.