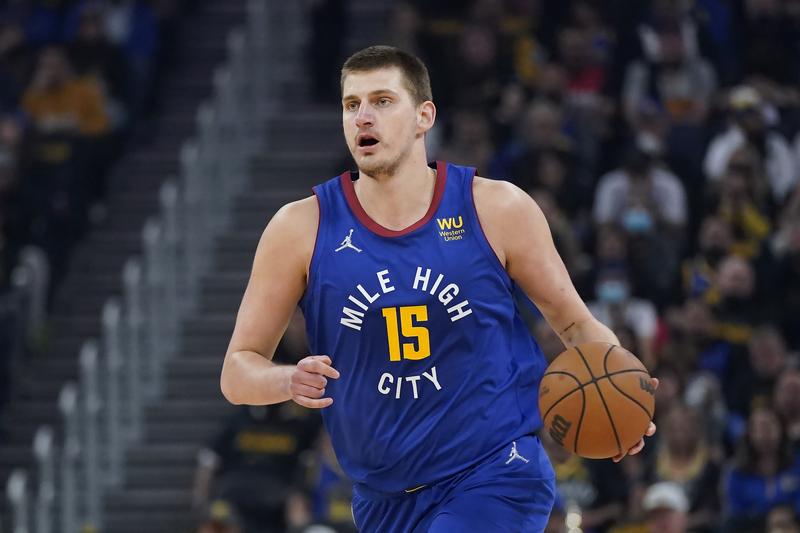 Denver Nuggets center Nikola Jokic (15) dribbles the ball up the court against the Golden State Warriors during the first half of Game 2 of an NBA basketball first-round playoff series in San Francisco, April 18, 2022. (JEFF CHIU / FILE / AP)

WASHINGTON - Nikola Jokic of the Denver Nuggets has been named the Most Valuable Player of the 2021-22 NBA season on Wednesday, taking home the trophy for the second consecutive season.

In his seventh NBA season, 27-year-old Jokic averaged 27.1 points, 13.8 rebounds, 7.9 assists, 1.47 steals and 0.85 blocks per game from 74 games played, leading Denver to a 48-34 finish in the regular season to qualify for the playoffs for the fourth consecutive season, despite being defeated by the Golden State Warriors 4-1 in the first round.

The Serbian received 875 points with 65 first-place votes, ahead of Joel Embiid of the Philadelphia 76ers with 706 points and Giannis Antetokounmpo of the Milwaukee Bucks with 595 points, which also marked the first time in NBA history that international players finishing the top three in the contest.

Jokic became the 13th player to win back-to-back MVP awards, also the second consecutive international player to claim two in a row, after Antetokounmpo in 2019 and 2020.