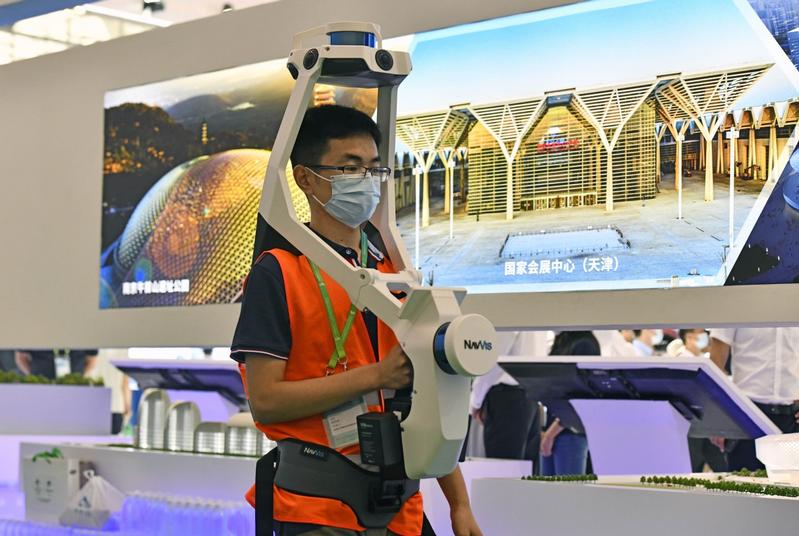 A worker displays smart monitoring equipment at the expo on June 24. (PHOTO /XINHUA)

A workshop manufacturing home appliances in Shenyang, Liaoning province, is offering clients a chance to customize refrigerators remotely using their mobile phones. They can choose colors, functions and design styles without having to enter a bricks-and-mortar store.

When consumers place an order, intelligent equipment in the interconnected factory automatically reads the information and starts customized production.

Cutting-edge technologies, including artificial intelligence, big-data analysis, cloud computing, the internet of things and 3D printing, have improved the workshop's productivity by 28 percent.

President Xi stressed that developing a digital economy is a strategic choice for grasping fresh opportunities in the new round of the scientific and technological revolution and industrial transformation, as it can help foster a new development paradigm, a modern economic system, and new national competitive strengths.

Haier's digitalization drive offers a glimpse of how Chinese manufacturers, especially those in traditional industries, are embracing the digital economy, which is mainly represented by emerging information technologies and has become a key engine driving economic growth.

Experts said the nation's greater emphasis on the sound development of the digital economy will accelerate a transformation and upgrading in enterprises, injecting fresh impetus into China's high-quality economic development.

They added that the digital economy is expected to play a bigger role in narrowing the digital gap between urban and rural areas and empowering all walks of life in coming years.

The scale of China's digital economy reached 39.2 trillion yuan ($6.2 trillion) in 2020, up by 9.7 percent year-on-year and ranking second in the world, according to a white paper released by the China Academy of Information and Communications Technology. The digital economy accounted for 38.6 percent of GDP, remaining a key pivot for the nation's economic growth.

The digital economy has also been mentioned in the Government Work Report for the past five years. According to the 2022 report, the nation will strengthen overall planning for the Digital China initiative, build more digital information infrastructure, and apply 5G technology on a larger scale to promote development of this economy.

The report added that China will advance digitalization of industries, accelerate development of the industrial internet, build up digital industries such as integrated circuits and artificial intelligence, and enhance technological innovation and supply capacities for key software and hardware. 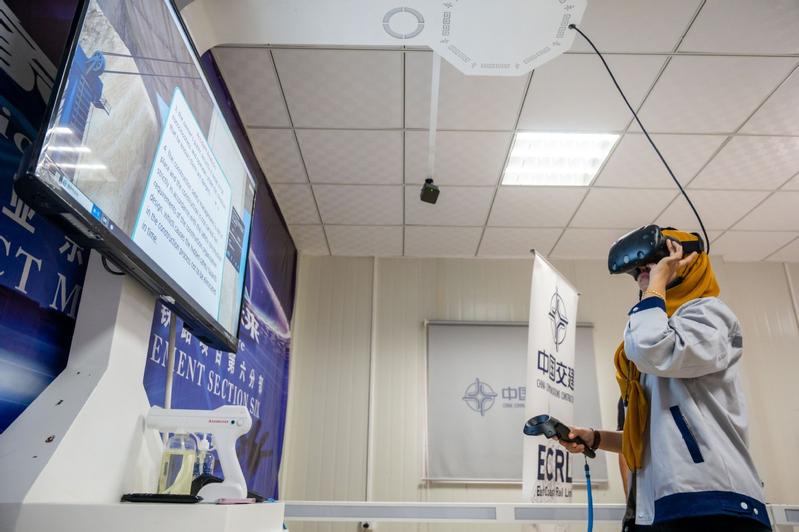 President Xi Jinping, also general secretary of the Communist Party of China Central Committee, has called for the nation to grasp the trend and law of digital economic development and push forward sound development of the digital economy.

He made the remarks while presiding over a study session of the Political Bureau of the CPC Central Committee in October.

Xi stressed that developing a digital economy is a strategic choice for grasping fresh opportunities in the new round of the scientific and technological revolution and industrial transformation, as it can help foster a new development paradigm, a modern economic system, and new national competitive strengths.

He also called for efforts to strengthen and expand China's digital economy through promotion of in-depth integration of digital technologies with the real economy and for the use of such technologies to transform traditional industries and create new ones and types of business.

Long Haibo, a senior researcher at the Development Research Center of the State Council, China's Cabinet, said cutting-edge digital technologies such as artificial intelligence, 5G, big data and the internet of things are gaining momentum and speeding up digitalization in a wide range of traditional industries such as manufacturing and agriculture

The digital economy is also a key field of the Global Development Initiative proposed by Xi when he addressed the general debate of the 76th session of the United Nations General Assembly via video link in September.

Long Haibo, a senior researcher at the Development Research Center of the State Council, China's Cabinet, said cutting-edge digital technologies such as artificial intelligence, 5G, big data and the internet of things are gaining momentum and speeding up digitalization in a wide range of traditional industries such as manufacturing and agriculture.

He added that the nation attaches great importance to developing the digital economy. It has also made remarkable progress in improving digital infrastructure, stepped up efforts to foster new industries and new business models, and boosted digitalization of industries in recent years.

In January, the State Council announced a plan to further promote development of the digital economy during the 14th Five-Year Plan (2021-25) period. China aims to raise the proportion of the added value of core digital economy industries in its GDP to 10 percent in 2025, up from 7.8 percent in 2020, according to the plan.

The plan states that by 2025, the digital transformation of the nation's industries will reach a new level, digital public services will become more inclusive, and the digital economy governance system will noticeably improve. 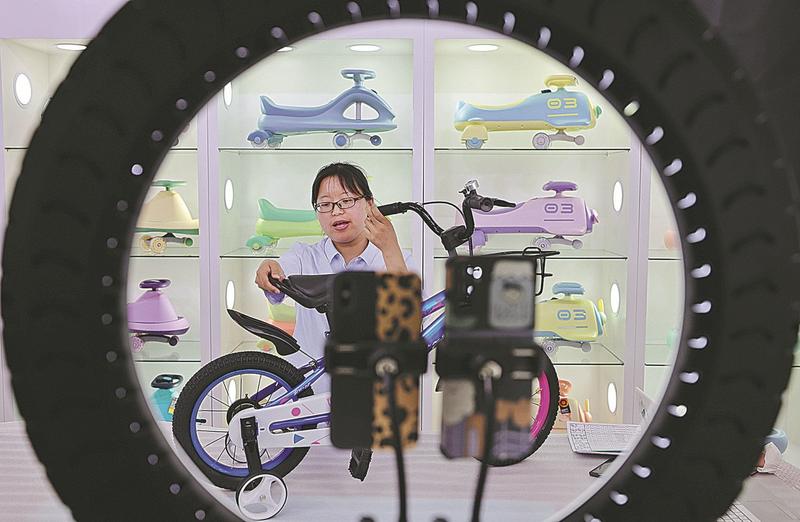 An employee of a bike manufacturer in Xingtai, Hebei province, promotes products online. (PHOTO BY WANG LEI / FOR CHINA DAILY)

Xiang Ligang, director-general of the Information Consumption Alliance, a telecom industry association, added that the in-depth integration of digital technologies with the real economy will also further reinforce China's advantages in global supply chains and enhance the worldwide competitiveness of its enterprises

He praised the intensified efforts to develop the digital economy, which has become a primary force propelling China's economic growth and accelerated digital and intelligent upgrades at enterprises.

Xiang added that the in-depth integration of digital technologies with the real economy will also further reinforce China's advantages in global supply chains and enhance the worldwide competitiveness of its enterprises.

Artificial intelligence, or AI, has become a key technology driving digital transformation and industrial upgrading. During the COVID-19 pandemic, AI-powered technologies have been used widely for source tracing of virus transmissions, virus detection, remote diagnosis and treatment, and resource allocation.

The size of China's AI industry reached 303.1 billion yuan in 2020, up by 15 percent from the previous year, according to the China Academy of Information and Communications Technology.

Robin Li, co-founder and CEO of Chinese tech giant Baidu, said AI technology is reshaping industries to become a transformative force revolutionizing human development over the next 40 years. In 2017, Baidu was chosen to lead the establishment of China's AI national laboratory on deep learning.

Baidu said it will continue to innovate, make breakthroughs in key technologies, strive to achieve self-reliance in science and technology, and promote the deep integration of AI with industry.

Meanwhile, Tencent has launched an AI lab and made efforts to put fundamental research to practical use by applying AI to its key businesses, including medicine, social interaction, online games and cloud computing.

According to a circular issued by 12 central government departments, including the National Development and Reform Commission, China will accelerate construction of major new infrastructure projects, support telecom operators in speeding up 5G construction, and help industrial enterprises advance digital transformation.

Statistics from the Ministry of Industry and Information Technology show that the nation had established more than 1.4 million 5G base stations by the end of last year, accounting for over 60 percent of the global total. More than 650,000 of these stations were built last year alone.

Zhao Zhiguo, head of the ministry's information and telecommunications management department, said China has bolstered the application of 5G in sectors that include smart healthcare, education, energy, transportation, virtual reality, and augmented reality.

More efforts should be made to support enterprises to adopt 5G international standards, advance the construction of 5G networks, and expand application scenarios, Zhao added. 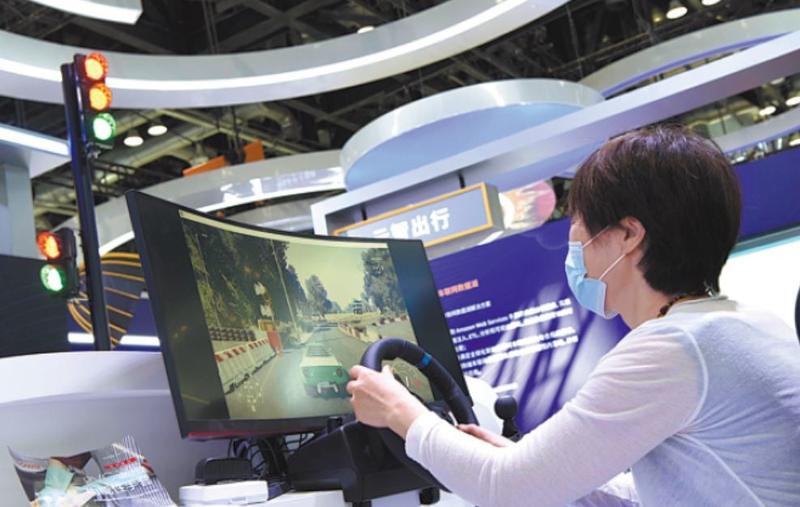 A visitor tries her hand on a driving simulator using digital technologies at the recent 2021 CIFTIS in Beijing. (PHOTO / XINHUA)

Liu Qingfeng, chairman of iFlytek, a front-runner in the intelligent speech and AI industry, said new infrastructure projects such as 5G networks and data centers are crucial for developing the digital economy.

"Developing new infrastructure is an effective measure to hedge against the impact of the pandemic and to achieve stable growth, as well as an inevitable choice to expand emerging industries and boost high-quality development," Liu said.

To speed up industrial digitalization, Liu said an open and synergetic digital industry innovation ecosystem should be nurtured to cover small and medium-sized enterprises and social development. Digital industry clusters that can compete globally should also be built, he said.

Developing new infrastructure is an effective measure to hedge against the impact of the pandemic and to achieve stable growth, as well as an inevitable choice to expand emerging industries and boost high-quality development.

Liu Qingfeng, chairman of iFlytek, a front-runner in the intelligent speech and AI industry

"Digital transformation will also bring new opportunities for the AI industry," he said, adding that China should make full use of its 5G and AI strengths and take the lead in providing barrier-free smart communication services worldwide.

Wang Yiming, vice-chairman of the China Center for International Economic Exchanges, said, "With the popularization of 5G, AI and big data in various fields, digital transformation is now expanding from the consumption to the production sector."

Furthermore, China is accelerating the construction of an internet-based industrial ecosystem. The nation is at the forefront in terms of industrial scale, scientific and technological levels, platform influence and number of unicorn enterprises (startups or private companies with a valuation exceeding $1 billion), all of which are significant in cushioning economic downward pressure.

Zhou Yunjie, chairman and CEO of Haier, said the industrial internet will play a bigger role in bolstering high-quality development of the digital economy and deepening digital transformation in manufacturing, operational management and marketing services.

Economic digitization is key to bolstering urban digital transformation, and the industrial internet has become a new engine driving growth of the digital economy in cities, Zhou said.

Haier has invested heavily in the industrial internet to develop COSMOPlat, which is designed for companies to customize products quickly by collecting and analyzing data from consumers, suppliers and factories, while boosting productivity and cutting costs.

The company's factory in Shenyang has been included in the World Economic Forum's Global Lighthouse Network, a community of world-leading manufacturing facilities and value chains using advanced technologies to increase efficiency and productivity.

Statistics from the ministry show the nation has nurtured more than 100 industrial internet platforms with a strong regional influence. Some 76 million items of industrial equipment are connected to these platforms, which serve 1.6 million enterprises in over 40 key industries.

Experts said more efforts should be made to cope with the rising cybersecurity challenges posed by the digital economy. A report released by global accounting company PwC said emerging technologies such as AI and 5G will set higher requirements for cybersecurity.

Zhou Hongyi, founder of cybersecurity company 360 Security Group, noting the digital economy has become a key part of national strategy and a major driver of economic recovery amid the pandemic, said that buoyed by the advancement of digitalization, traditional cybersecurity is being upgraded to digital security.

He also said more efforts are needed to cultivate leading enterprises in cybersecurity, expand cooperation on 5G, and speed up the research and formulation of 5G security standards.

Internet-driven companies should collaborate with traditional industries, and make full use of their advantages in technologies, talent and capital to support the digital transformation, Zhou said.

A report by global market consultancy IDC said the compound annual growth rate for China's cybersecurity spending from 2019 to 2023 will be 25.1 percent, compared with the global average of 9.44 percent.

Kitty Fok, managing director of IDC China, said, "The next five years will be a golden period for pushing forward digitalization, and governments around the world are paying greater attention to digitalization."

She added that direct investment in digital transformation worldwide will surpass $6.8 trillion from 2020-23.