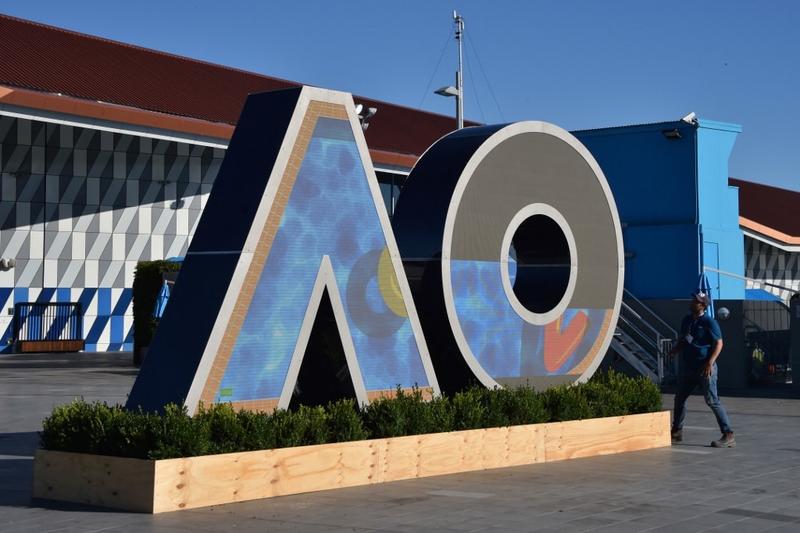 In this file photo taken on Jan 14, 2018, a worker checks on a logo for the Australian Open tennis tournament ahead of its start in Melbourne. (PETER PARKS / AFP)

SYDNEY - Adelaide will host two tournaments, including the Adelaide International, in the lead-up to the Australian Open in January next year, South Australia state Premier Steven Marshall announced on Monday.

The Adelaide International was staged as a warm-up to the Grand Slam in 2020, but this year all the warm-ups for the Australian Open were held at Melbourne Park after players came out of quarantine.

The run-up to next year's edition of the Grand Slam looks like being closer to normal.

Players not vaccinated against COVID-19 will be barred from playing at the Australia Open, organizers confirmed last week

The first event will be held from Jan 2-9 and will feature a WTA 500 and ATP 250 combined tournament, with a second event, a WTA 250 and ATP 250, scheduled for the following week at the newly redeveloped Memorial Drive Tennis Centre.

The playing fields for both the events will be announced next month.

"Our investment of A$44 million ($31.89 million) for Stage Two of the Memorial Drive redevelopment is creating a world-class venue capable of hosting not just tennis but a range of sporting and entertainment events into the future," said Marshall.

"South Australia has done so incredibly well throughout the COVID-19 pandemic and it's our willingness to listen to the health advice that means we're able to hold events like this one in January."

Players not vaccinated against COVID-19 will be barred from playing at the Australia Open, organizers confirmed last week.

Sources at the ATP said there would be four warm-up events in Australia ahead of the major in addition to the $10 million ATP Cup men's team tournament, which will be held in Sydney.

Sydney hosted the knockout rounds of the event in its inaugural year in 2020 after group matches were also held in Brisbane and Perth.

Some state borders that were closed to stop the spread of COVID-19 are opening up as vaccination rates rise but Western Australia and Queensland have retained restrictions on entry, making it unlikely that Perth and Brisbane will host any warm-up matches in January.

Tennis Australia said the full schedule of events running up to the Australian Open would be unveiled in the next few days.

The WTA women's tour and the men's ATP tour have yet to announce events for the 2022 season.