By Xin Wen and Sun Ruisheng in Shanxi 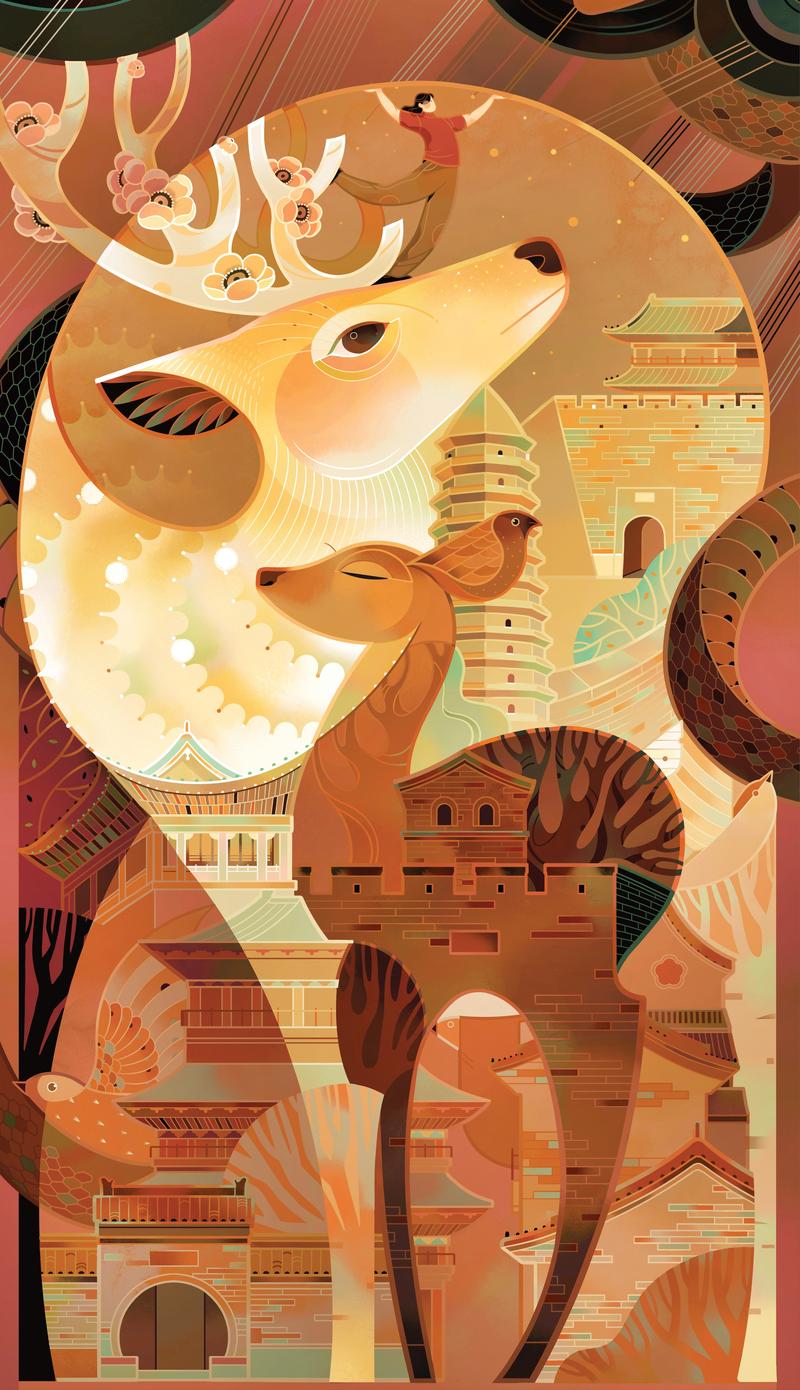 As heavy afternoon rain fell last month in Pingyao, Shanxi province, Shao Shuai was worrying about damage to the ramparts of the ancient city’s wall, which stands 8 to 10 meters high.

The inner sections of the ramparts were built from rammed earth more than six centuries ago.

On Oct 4, Shao, 38, a cultural relics protection worker in the city, which is a UNESCO World Heritage Site, rushed to the western area of Pingyao with his colleagues.

They checked whether the plastic sheeting that they had put in place earlier to cover the earthen parts of the ramparts from rain was doing its job. The workers also made sure clapboard they had installed was stopping pedestrians from passing through the area.

They worked into the early hours of the following day. Several hours later, Shao learned that the inner parts of the ramparts, known as Section No 84, in an eastern area of the city had collapsed as he slept. The collapsed section was 25 meters long.

Workers went to the site and took preventive measures as the rain continued to fall. Shao then returned to the western sections of the wall to reinforce protection measures.

Soon afterward, as local officials were inspecting the wall, Shao told them he had just seen an area of the structure known as Section No 25 collapse.

Together they witnessed brickwork sliding down the rammed earth to the ground. Subsidence at this section only stopped in the afternoon on Oct 6, Shao said.

The heavy rain, which started on Oct 2, continued until Oct 7. Precipitation was more than three times the level usually reported at that time of year.

As of Oct 11, a total of 1,783 heritage sites throughout Shanxi had been partially damaged, according to the National Cultural Heritage Administration. Significant damage was reported in cracked walls, collapsed foundations, fences and leaking roofs, but there were no injuries.

“I wish we could have renovated more interior sections of the wall before the rain arrived. It was heartbreaking to see all the damage,” Shao said.

The city walls in Pingyao, which span more than 6,100 meters, were built during the Ming Dynasty according to traditions at that time — the outer parts were built of bricks, while the inner were made from rammed earth.

According to the Pingyao City Wall Protection Office, 15 inner wall sections had been damaged as of Oct 19, with rammed earth subsiding at 36 locations.

In 2004, Ren Yimin, a cultural relics expert, led a team to restore the city wall. Since then, he has overseen repairs and renovations to the structure.

“Water poses the greatest threat to rammed earth, which comprises much of the city wall,” said Ren, dean of the Shanxi Provincial Conservation Research Institute of Ancient Buildings, Colored Sculptures and Murals.

“We were hit hard by the torrential rain this year, but the wall is at risk of collapsing during the rainy season every year. Different parts of the wall have been repaired over the years,” he added.

Shao said the sections of the wall he restored in the past 10 years were not damaged in the recent rainfall. “My colleagues and I put up more than 200 plastic sheets on different parts of those sections that might be in danger,” he added.

During the rainfall, patrol teams worked day and night to inspect the wall, with a team of two allocated for each section, Shao added. 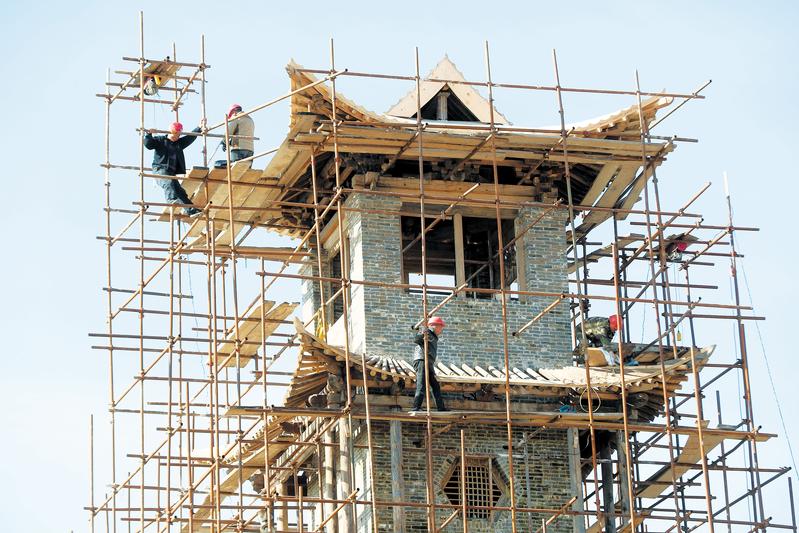 Pingyao residents appreciate the efforts made by Shao and his colleagues to renovate and strengthen the ramparts, believing that the wall is sufficiently safe even though it is high and close to their homes.

Guo Dianhua, 72, whose family has lived for five generations in Pingyao, said that although some sections collapsed, she thought the inner parts of the wall would stand firm, as they have for centuries.

“The rain was very heavy, streaming down the roofs for several days and nights,” she said, adding that in addition to the ramparts, she was worried about the roof of her house. Some parts of the roof were washed away by the storms, and she used loosely packed cement to fill the cracks.

A total of 89 sites, including two at national level and seven at provincial level, were reported to have experienced major structural damage or partial collapse.

While listed relics will be repaired and renovated, protection experts said they were more worried about those relics not included on lists for government safeguarding.

Shanxi boasts 538 key historical and cultural sites protected at national level, the largest number in the country, according to the National Cultural Heritage Administration.

The province has many more cultural relics that are not included on the government protection list.

“The province is full of surprises. In small villages, you frequently come across ancient temples, pavilions and even delicate murals dating to the Ming Dynasty,” he said.

Most of these sites are not included on the government protection list. Tang, who was sad to see wooden buildings damaged by the heavy rainfall, called for the government and businesses to make more efforts to deliver funding and human resources for protection work.

“Among the cultural relics damaged during the rainfall, ancient wooden buildings not listed as protected could come off worse, as they are usually situated in isolated areas. The rainfall could accelerate their state of disrepair,” he said.

Based on their value in terms of history, art and science, unmovable cultural treasures such as ancient tombs, architecture, cave temples and murals may be determined for protection as cultural relics at national, provincial, city or county level, according to the Cultural Relics Protection Law, which took effect in 1982 and was amended in 2017.

Other relics are not included on the government protection list at any level. “There are about 40,000 such sites in Shanxi, half of them home to ancient architecture,” Bai said.

He added that ancient structures not included on protection lists were severely damaged during the recent heavy rainfall, and losses are still being calculated.

“Villagers used to volunteer to repair and protect cultural relics that were not on protection lists at any level, but with the accelerating pace of urbanization, many people have left for cities, and relics sites have become forgotten,” he said.

Shanxi has spent more on protecting cultural relics in recent years, with annual allocations in this regard from 2016 to last year reaching more than 100 million yuan ($15.6 million), according to Bai. In addition, 10 million yuan has been earmarked for protecting such relics at national and provincial levels.

However, Tang said relics that are not on government protection lists, including ancient architecture, still face the risk of being damaged or destroyed due to a shortage of cultural protection workers and the abandonment of cultural relics institutions at grassroots level.

Yangzao village in Huozhou, Linfen city, Shanxi, is home to 1,656 farmers in 504 households. The villagers plant grain and fruit trees to earn a living, and Yangzao is divided by a freeway into eastern and western areas.

Only a few residents live in the western area, home to a temple compound covering more than 100 square meters. 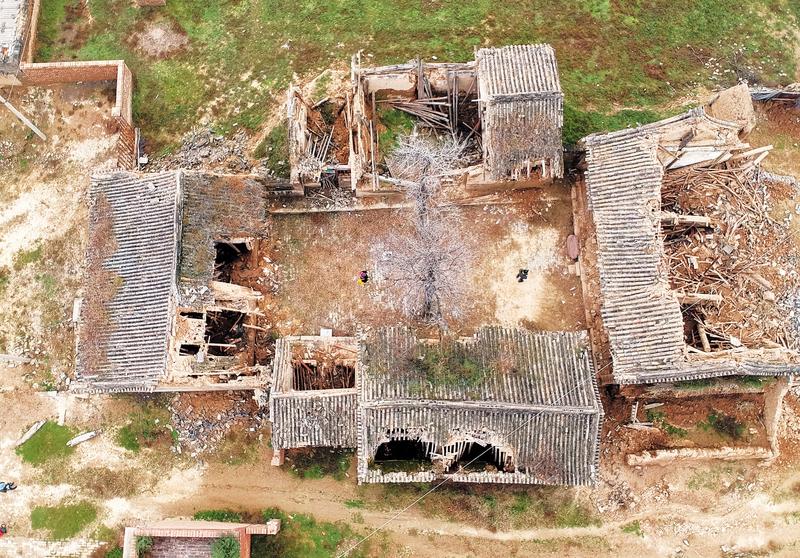 A stone tablet placed above the main gate is inscribed with three characters, pu, zhao and si, meaning “temple of sunshine everywhere”.

Tang visited the temple, whose main gate was locked late last month after the rainstorms. Being tall, he entered through the side entrance, bending his head.

Weeds and trees had taken root inside the temple, whose main hall stands slightly elevated on a bank of earth.

Tang climbed to the hall and found that one-third of roof had collapsed. Some murals that adorned the temple walls were stolen long ago.

A girder in the center of the roof was engraved with the year the structure was built — the second year of Emperor Yongle’s reign (1403-1424) in the Ming Dynasty.

After inspecting the temple complex, Tang sighed and said, “I was so sad to see the condition it was in after the rain.”

He said the site had become damaged over the years, adding that it was “unforgivable” for a cultural relic to experience such irretrievable losses.

“In addition to the Cultural Relics Protection Law, I hope full play can be given to the social value of ancient architecture, and that more businesses from outside can be attracted to help the village and its ancient structures,” Tang said.

In the middle of October, Tang visited Guandi Temple in Xinjiang county, Yuncheng, Shanxi, which was built in tribute to Emperor Guan, known for his valor and loyalty during the Three Kingdoms period (220-280).

A fair held at the temple attracted opera troupes and villagers from many areas.

“Two hours before the fair opened, villagers arrived from remote areas, waiting eagerly for it to start. I think the social value of ancient architectural sites is given full play in this way,” Tang said.

Some cultural relics survived the torrential rain in Shanxi, thanks to quick action by protection workers and villagers.

During the five days of heavy rain in Xinjiang county, Yuncheng, the Fenhe River, a major tributary of the Yellow River, experienced its biggest flood crest for 40 years.

Yang Yingjie, director of the county’s cultural relics protection center, said protection measures had been taken since late September, when it began to rain more heavily in the area than in past years.

The rain penetrated the roof and reached the walls of the main hall at the Longxing Temple late that month, Yang said. The temple was built during the Yuan Dynasty (1271-1368).

“Workers guarding the temple called me during the night, and we decided to put up a large amount of plastic sheeting to cover the entire hall to ensure the safety of the statues,” Yang said.

Six large sections of plastic sheeting were lifted by crane to cover the temple rooftop. Small pieces of waterproof cloth were also used to cover the Buddhist statues.

“I wish we could have used some other way to better protect the ancient building and its statues, but as it was an emergency, I thought this was the best solution,” Yang said.

Bai, from the Shanxi Cultural Relics Bureau, said a team was formed last year to safeguard those relics not included on government protection lists. This year, a project was launched to list all buildings constructed before the Yuan Dynasty as cultural relics protected at county level. The project is expected to be completed by 2025.

Ren, the research institute dean, said that in addition to government funding, Shanxi encourages the public, organizations, institutions and enterprises capable of maintaining ancient buildings to “claim” those not included on protection lists.

“Those who ‘claim’ such buildings have to protect them, but also have the right to use them for a period of time as long as they meet the requirements for cultural relics protection,” he said.

To date, 238 ancient buildings have been “claimed” in Shanxi, which boasts about 28,000 such structures.

Yanjiazhuang village, about 7 kilometers west of the Xinjiang county seat, used to house a pavilion where students prayed for academic success in ancient times. The structure was built during the Qing Dynasty.

During the October storms, the pavilion collapsed.

Yan Yexing, 68, who lives next to the pavilion site, has strong feelings for the venue, which she has visited often.

During Spring Festival and on other traditional occasions, she is one of more than 1,000 villagers who worship at the Temple of the Goddess, to which the pavilion was attached.

“The pavilion was so close to my home that I felt as though it was the backyard of my house, but I never thought that its collapse would attract reporters from Beijing,” she said.

Yang Yingjie, the county cultural relics protection center director, visited the site and led his workers in removing wooden pillars for storage in a warehouse.

The small temple was decorated by red lanterns scattered on the ground after the rain.

The incense burner was filled with ashes, while a Bodhisattva statue, adorned with a red satin cloth, was covered with dust.