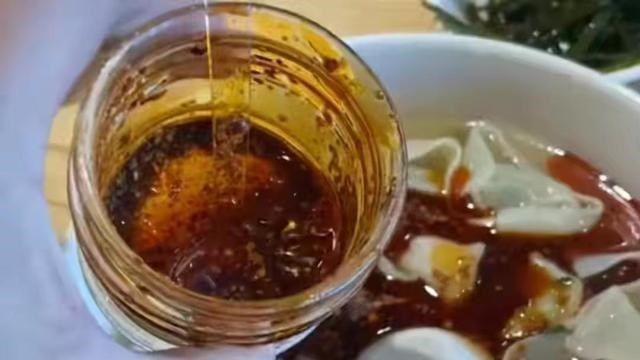 This screengrab taken from a video posted by a man surnamed Zhang who complained about being ripped off at an airport restaurant shows him pouring a half-full can of chili oil into his bowl of wonton.

LHASA - It is simply daylight robbery!

A man from east China shot to fame on social media over the past few days after posting a video complaining about the food at an airport restaurant, bringing laughter to many while also receiving quite a bit of empathy.

"It's 58 yuan (about $9) for just a bowl of wonton. Why didn't you charge me 580 yuan instead?" the man surnamed Zhang murmured to himself in the video, which was shot Friday at a Jixiang Wonton restaurant in southwest China's Tibet autonomous region.

Apparently feeling overcharged, the man poured a half-full can of chili oil into his food. "I must empty the chili, even if it kills me," said the 30-year-old who drove from Shandong province to Tibet for sightseeing but decided to fly back.

"I'm going to empty the vinegar too," he said in the clip, pouring most of the dark liquid from a small bottle into his bowl. A similar bowl of wonton would only cost half the price or even less in his home province.

The video soon went viral on popular Chinese video-sharing app Douyin and various news sites, attracting a flood of comments from viewers. Some think he was adorable and hilarious, some say he overreacted and was being dramatic, while others shared his feelings and offered words of comfort

The video soon went viral on popular Chinese video-sharing app Douyin and various news sites, attracting a flood of comments from viewers. Some think he was adorable and hilarious, some say he overreacted and was being dramatic, while others shared his feelings and offered words of comfort.

"My first impression is that this consumer is so adorable that he made up for his 'loss' within every rule and found an effective outlet for his bad feelings," said a Douyin user Jin Laoxi.

Some viewers expressed worries about Zhang's own health, joking that if anything happens to his stomach, he might have to shell out 5,800 yuan for the 58-yuan wonton soup.

"It's like killing 100 enemies but losing 800 lives on his own side," a viewer nicknamed Yang Xiaoyang commented.

The video also reminded many of their similar experiences of buying expensive food at airports, train stations or popular tourist attractions.

Some agree the food was by no means cheap, but many others argue it was reasonably priced given the higher expenses for opening a shop at an airport and the higher costs of transporting materials to the plateau region.

A message for comments was made Monday to Jixiang Wonton, a 22-year-old wonton restaurant chain based in Shanghai. The chain opened the new restaurant in Tibet in August 2021 as the first in the region, reports showed.

"I wasn't even full after eating the wonton, and had to spend another 5 yuan to buy a cup of instant noodles," Zhang said.

He, however, deleted the video from his account after all kinds of comments flooded in and numerous accounts reposted it.

"I didn't expect that so many people would repost my video. Although I emptied the chili and vinegar on the table, I ate it all and didn't waste anything," he said.

"On second thought, the restaurant probably does have to pay very high rent and other expenditures," Zhang added. "So I deleted it."