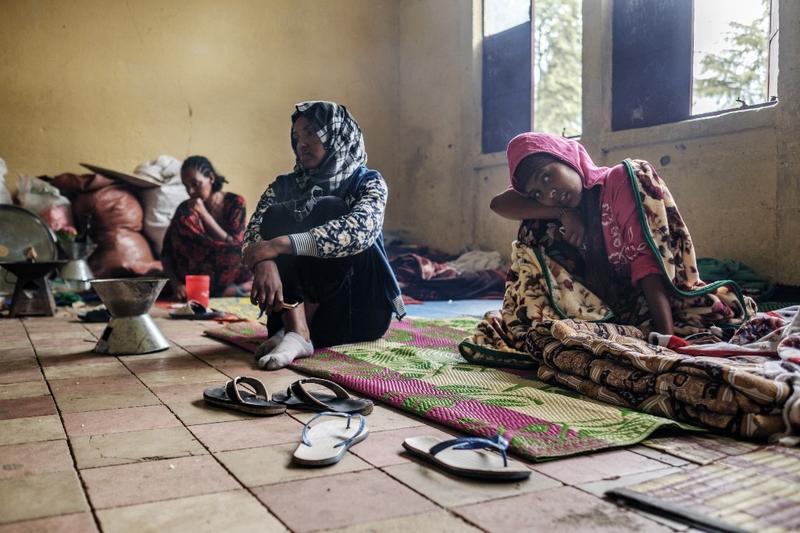 In this Aug 24, 2021 photo, women displaced by fighting in northern Ethiopia, sit in a classroom at a school where they are temporary sheltered, in the city of Dessie, Ethiopia. (EDUARDO SOTERAS / AFP)

UNITED NATIONS - Describing the situation in northern Ethiopia as unpredictable and volatile, the United Nations on Wednesday urgently called on all parties to allow unimpeded and sustained access for humanitarian aid.

Some 897 trucks have entered Tigray since July 12, or only about 14 percent of the trucks needed, OCHA said, repeating that 100 trucks are required daily

The UN Office for the Coordination of Humanitarian Affairs (OCHA) said the most affected areas are in Tigray, Amhara and Afar regions. The delivery of humanitarian supplies into Tigray is heavily constrained. The only road access is the Semera-Abala-Mekelle corridor.

Between Oct 6 and 12, 211 trucks carrying humanitarian supplies arrived in Tigray, compared with 80 trucks a week earlier, the humanitarian office said. "While the increased number of trucks is a positive development, this is still insufficient compared to the needs."

Some 897 trucks have entered Tigray since July 12, or only about 14 percent of the trucks needed, OCHA said, repeating that 100 trucks are required daily.

There were no fuel deliveries to Tigray since the end of July, the office said. However, 10 fuel tankers waiting in Semera in Afar region have received government approval to proceed into Tigray, and OCHA hopes they will be able to move to Tigray with the next convoy.

While the trucks have the green light to go in, OCHA said that medicines could not enter Tigray.

Several UN and nongovernmental partners significantly reduced or shut down programs due to depletion or severe shortages of fuel, cash and other supplies, the office said.

Those partners continue to respond to some of the most urgent needs in Tigray with the available, limited resources, OCHA said. More than 146,000 people received food aid last week. But at least 870,000 people on an average week need food assistance. The partners need to serve 5.2 million people within a six-week cycle.

The humanitarians said emergency water was delivered by truck to about 143,000 people last week, down from about 193,000 people a week earlier.

In the Afar region to the east of Tigray, and Amhara to the south, humanitarian partners are scaling up their responses, OCHA said. Since early August, they have reached about 639,000 people with food assistance in the accessible areas of Amhara and about 72,000 internally displaced people in Afar.