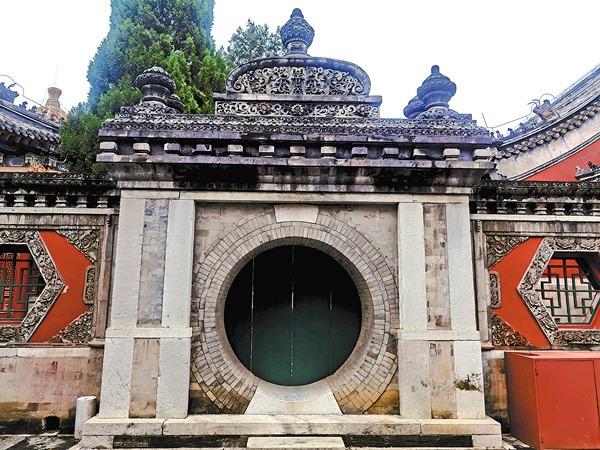 Architecture in the temple also reflects a mixture of different cultural elements; for example, as seen in this gate in the temple, traditional Chinese patterns are mixed with ancient Roman, Baroque and Hindu art. (PHOTO BY WANG KAIHAO / CHINA DAILY)

Yachts play on the water in a daily show of wind-powered elegance on a section of the Grand Canal just before Wanshou Temple, which is located in the northwest of downtown Beijing. The section of water was also used for the same purpose centuries ago. The difference is that the enjoyment then was exclusively limited to royalty.

In renovation, there’s little room for us to show creative minds if we want to respect history.

Wanshou Temple, which literally means "the temple of longevity", is now home to Beijing Art Museum. It was built during the Wanli era in 1577 during the Ming Dynasty (1368-1644).

It gradually became a place for Qing Dynasty (1644-1911) royals to pray for their own longevity before images of Buddha. They could rest there at the halfway point on their way to the Summer Palace.

Time, however, eroded its prosperity. Before the ongoing restoration of Wanshou Temple, the last major renovation was back in 1893.Then, Empress Dowager Cixi-the de facto ruler of the Qing Dynasty-was eager to prepare for her 60th birthday.

More than one century later, this exquisite architectural compound, which covers 34,000 square meters and includes more than 100 historical buildings, was in urgent need of renovation. A western part of the temple was even used as a crowded residential area where living conditions were poor. 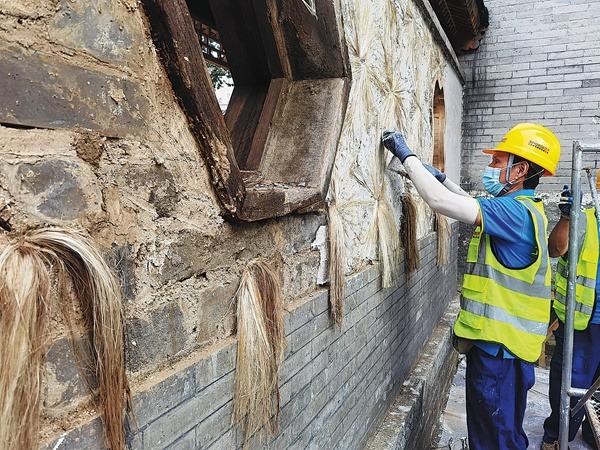 As an essential process for consolidation, flax is twisted around the bamboo nails and spread across the surface of wall by a worker at the temple before it is painted. (PHOTO BY WANG KAIHAO / CHINA DAILY)

"This is the best preserved former royal temple along the Grand Canal in Beijing," Wang Dan, director of Beijing Art Museum, says.

"It has great historical, artistic, social and cultural significance, but we have to better display its value."

According to Wang, Emperor Qianlong, an enthusiast for fine art, once wrote 46 poems for Wanshou Temple. The emperor also brought exotic artistic styles into the temple when it was renovated. A gate in the temple, for example, mixed ancient Roman, Baroque and Hindu art with traditional Chinese patterns.

In 2018, to highlight the importance of Wanshou Temple in the cultural landscape of the Grand Canal, a major renovation, the fifth in history, was launched covering about 10,000 square meters of the compound.

Last month, the renovation site was reopened to the public for the first time, more than three years after the front gate of the temple was locked.

To mark the occasion, Wang announced that the first phase of the renovation, which focused on the central part, has been completed, while the second phase of work, which deals with the western part, will possibly be finished by the end of this year.

"After the renovation, the historical appearance as it would have been when it was a royal temple will be restored," Wang says. "We'll also have much larger spaces to exhibit our collections." 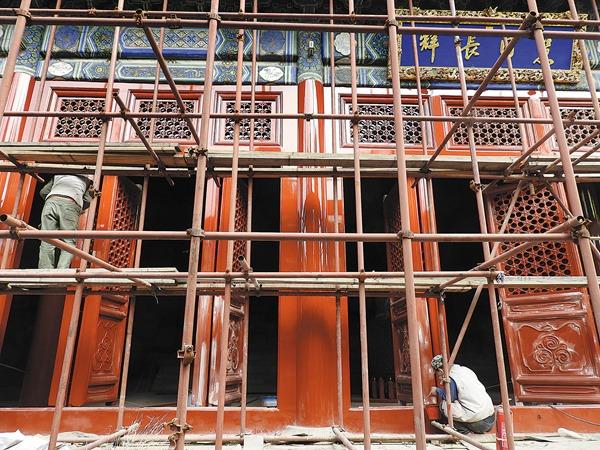 The ongoing renovation of Wanshou Temple in Beijing reflects the preservation and revival of traditional Chinese craftsmanship in architecture. (PHOTO BY WANG KAIHAO / CHINA DAILY)

According to Wang, a principle of "minimum intervention" was adopted in the ongoing renovation. When cleaning beams where colors of decorative paintings had faded, renovators would usually not add colors or repaint, to keep its aged look. And in the case of a decayed pillar, it did not necessarily mean the entire column would need to be replaced. The original wooden pieces were carefully separated and new material was used to replace only the rotten parts.

According to Zhang Mingda, a veteran conservator of ancient architecture at the Beijing Real Estate Group and a supervisor of renovation of the temple, the style of the original craftsmanship and the materials used have been rigidly followed to maintain its integrity.

"In renovation, there's little room for us to show creative minds if we want to respect history," Zhang says. "Modern cement and glues are not allowed. Even the nails we use to consolidate walls are made of bamboo."

As an essential process for consolidation, flax is twisted around the bamboo nails and spread across the surface of wall before it is painted.

All earthen bricks used in the renovation are handmade. Compared with those produced by machines, the surfaces of these bricks are rougher, which means restorers had to spend extra time to cut and polish them. 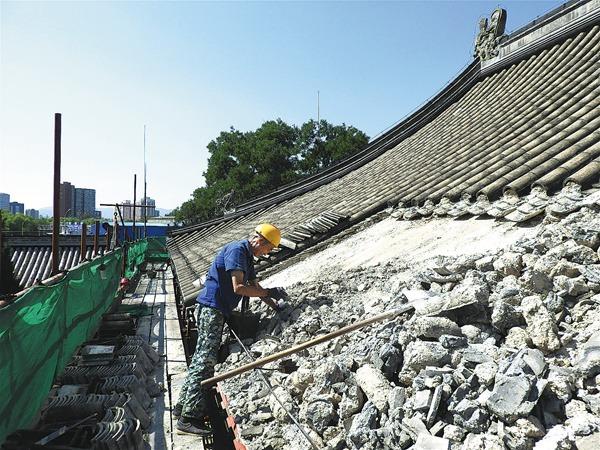 The ongoing renovation of Wanshou Temple in Beijing reflects the preservation and revival of traditional Chinese craftsmanship in architecture. (PHOTO BY WANG KAIHAO / CHINA DAILY)

And even the devices used for cutting the bricks are handmade, as are many other tools used in the renovation.

According to Wang, Wanshou Temple is a good example to use in educating people about the construction processes in traditional Chinese architecture.

Files relevant to this renovation will be introduced through multimedia channels to the public after the work is completed, according to Wang. It will also be part of an upcoming exhibition at Beijing Art Museum after its reopening.