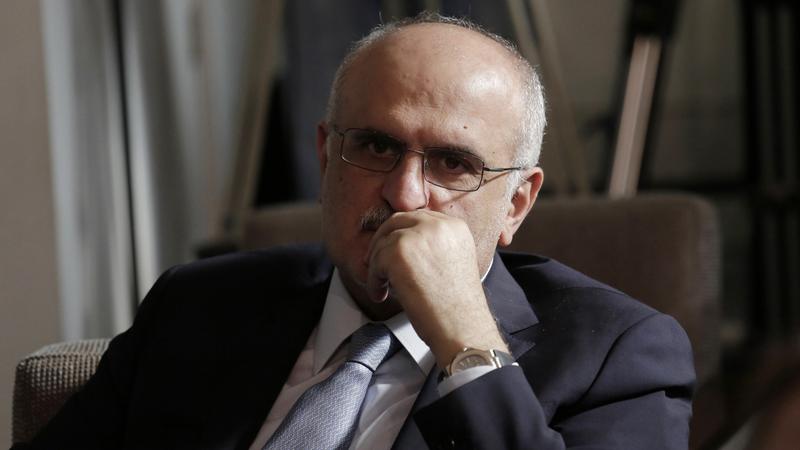 In this May 24, 2019 file photo, then Lebanese finance minister Ali Hassan Khalil listens to Lebanese information minister Jamal Jarrah while he speaks to a journalist at the Government House in Beirut, Lebanon. On Oct 12, 2021, Lebanon's state news agency said the judge leading the investigation into last year’s massive explosion at Beirut’s port has issued an arrest warrant for Khalil after he didn't show up for questioning. (HASSAN AMMAR / AP)

BEIRUT - A standoff between the judge investigating the disastrous Beirut port blast and top politicians he seeks to question roiled Lebanon's cabinet on Tuesday after the inquiry was suspended on Tuesday for the second time in less than three weeks.

The investigation has faced obstacles since judge Tarek Bitar sought to query some of Lebanon's most powerful people on suspicion they were aware of the stored chemicals involved in the Aug 4, 2020 explosion but did nothing to avert it.

Bitar has been under enormous pressure from groups that accuse his investigation of political bias and have mounted a smear campaign against him. The leader of the Iranian-backed, heavily armed Shi'ite Muslim political movement Hezbollah said on Monday it wanted Bitar removed from the case

Bitar has been under enormous pressure from groups that accuse his investigation of political bias and have mounted a smear campaign against him. The leader of the Iranian-backed, heavily armed Shi'ite Muslim political movement Hezbollah said on Monday it wanted Bitar removed from the case.

On Tuesday the inquiry was again shelved on the basis of another complaint accusing Bitar of bias.

The impasse spilled into a cabinet meeting on Tuesday where ministers, mostly from Hezbollah and the Shi'ite Amal movement, pushed for Bitar's ouster in a heated discussion that ended inconclusively, two sources with direct knowledge of the matter told Reuters.

The cabinet is due to meet again on Wednesday to discuss the inquiry, a former finance minister against whom Bitar issued an arrest warrant said in an interview with Lebanon's pro-Iranian Al Mayadeen TV.

The warrant for Ali Hassan Khalil, a senior member of Amal and a Hezbollah ally, was the second to be issued for an ex-minister and was the main cause of Tuesday's escalating tension.

Khalil said he deemed the warrant to be illegal and he would not heed it. He said Bitar was being influenced by politics and added: "The legal path that is being followed in this investigation is pushing the country towards civil strife."

Asked by Al Mayadeen whether some ministers would resign if Bitar was not removed, Khalil said: "All options for political escalation are open."

The port explosion, one of the biggest non-nuclear blasts on record, killed more than 200 people and devastated swathes of the capital Beirut.

Senior officials from across the political spectrum have refused to show up for questioning and arrest warrants appeared unlikely to be enforced.

Price said the United States believed Hezbollah was "more concerned with its own interests and those of its patron Iran than in the best interests of the Lebanese people.”

He added that US Under Secretary of State Victoria Nuland would visit Beirut on Wednesday for further "important" bilateral talks with Lebanese authorities.

Bitar had wanted to interrogate senior politicians on suspicion of criminal negligence as they had served in posts where they would have been in a position to know about the ammonium nitrate stored unsafely at the port for years.

The investigation was first suspended in late September on the basis of a complaint questioning Bitar's impartiality. A court rejected the complaint on procedural grounds, allowing Bitar to resumethe inquiry.

He is the second judge to lead the investigation. Fadi Sawan was removed from the case in February after a similar complaint filed by the politicians who are now challenging Bitar.

"For the first time, the judicial system wants to function, but it is suffering under political pressure and interventions," said Paul Morcos, lawyer and professor of international law.

Khalil was one of the two politicians who brought legal complaints against Bitar, challenging his impartiality.

The other politician was former public works minister Ghazi Zeiter, also a Hezbollah ally, who was due for questioning on Wednesday.

Hezbollah leader Sayyed Hassan Nasrallah voiced his harshest criticism yet of Bitar on Monday when he called in a televised address for his replacement, saying he was biased and politicised.

Nasrallah spoke a few weeks after Wafik Safa, a senior Hezbollah official, was said to have warned Bitar the group would remove him from the inquiry, according to a journalist and a judicial source.