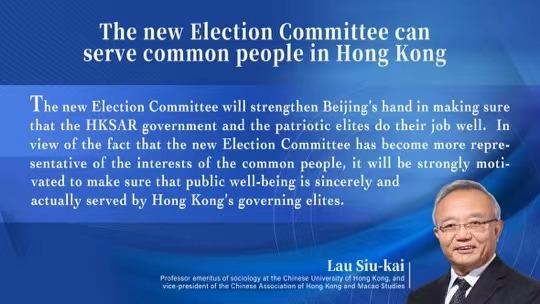 The balance between these two arenas varies across different societies. If the elite arena dominates, important decisions are made primarily by the elites, which cater largely to their interests. On the contrary, if the popular arena holds sway, the well-being of the common people will be better taken care of. As a society democratizes, the popular arena will expand at the expense of the elite arena, and policies benefiting the common people will increasingly be made by the ruling elites.

Interestingly, the experiences of the United States and Hong Kong offer counterevidence to this orthodox view among Western political scientists. In the case of the US, enlargement of the popular arena has in fact increased the power and advanced the interests of the elites. Larry Bartels, an American political scientist, in his Unequal Democracy (2008), convincingly shows that in the US, elected officials respond to the views of affluent constituents. Another American scholar, Martin Gilens, in his Affluence and Influence (2012), with an impressive range of data, demonstrates that America’s policymakers respond almost exclusively to the preferences of the economically advantaged. Most Western scholars attribute the cause of this growing disparity between the advantaged and the disadvantaged to the increasing clout of the pro-elite interest groups, parties and elections. And money politics is rated as the major reason for the increasing dominance of the elites and the growing disconnect between the elites and the common people. The rise of populism and growing disillusionment of the Western public with Western democracy are the unmistakable results of this disconnect. 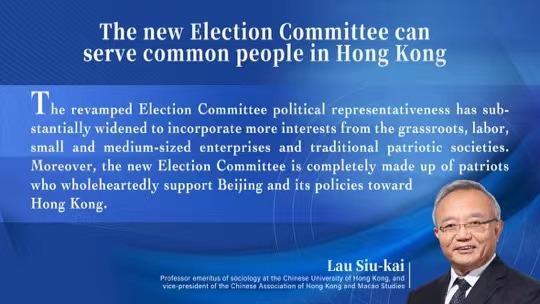 In view of the fact that the new Election Committee is no longer dominated by the vested interests and has become more representative of the interests of the common people, it will be strongly motivated to make sure that public well-being is sincerely and actually served by Hong Kong’s governing elites

Compared with the US experience, Hong Kong’s experience is also peculiar and unique, albeit in the opposite sense. Increasing democratization in Hong Kong after its return to the motherland has vastly enlarged the popular arena, producing in its wake a weak and ineffective government, a bellicose political opposition, a growing impact of public and media opinion, the increasing role of mass actions and protests in shaping public policy, and the rise of political populism. Nevertheless, the expansion of the popular arena has not led to the improvement of the well-being of the common people. Why? Because the government is too weak to make and execute policies that cater to the interests of the man on the street. The incessant political struggles within the popular arena have compelled the governing elites to focus narrowly on political issues, while the problems pertaining to public well-being have been sadly pushed aside. Consequently, the enlargement of the popular arena in Hong Kong has spawned increasing social grievances and political discontent, which in turn has become a hotbed for political turmoil, as witnessed in the violent uprising in Hong Kong during 2019-20.

The reform of the electoral system of Hong Kong decided by Beijing in early 2021 in practice has rebalanced the elite arena and the popular arena in the city in favor of the former. The revamped Election Committee, which will elect the chief executive of the Hong Kong Special Administrative Region, elect 40 of the 90 legislators and serve as the nominators for all the candidates in the Legislative Council elections, is a powerful body made up of elites from different social sectors and social classes. Its political representativeness has substantially widened to incorporate more interests from the grassroots, labor, small and medium-sized enterprises and traditional patriotic societies, whereas its predecessor is largely dominated by the large enterprises and elite professionals. Moreover, the new Election Committee is completely made up of patriots who wholeheartedly support Beijing and its policies toward Hong Kong.

At the same time, the electoral arrangement for the Legislative Council is revamped in such a way that the popular arena is shrunk. In the previous legislature, 35 of the 70 seats were taken by popularly elected legislators, whereas only 20 legislators in the new legislature with 90 seats will be popularly elected. 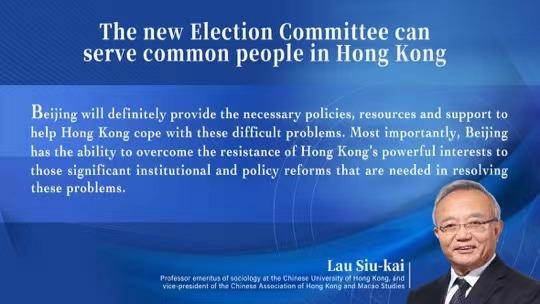 On the surface, it is easy to come to the conclusion that the rebalancing of the elite arena and the popular arena in Hong Kong in favor of the elites will be detrimental to the interests of the common people, just as would be predicted by the orthodox view popular among Western political scientists. However, future developments in Hong Kong are bound to demonstrate a different scenario. In short, the expansion of the elite arena in Hong Kong will benefit the common people much more than what happened in the past, when the popular arena was powerful.

Why? The major reason is the determination of Beijing to resolve the deep-seated economic, social and livelihood “contradictions” or problems in Hong Kong. These include by and large the staggering wealth gap between the rich and the poor, inadequate mobility opportunities for the young people, poverty, the housing shortage, and the narrow industrial base. Beijing fully understands that these problems are the major sources of political and social discontent and instability in Hong Kong.

The position of Beijing has been clearly spelled out in the decision of the Fourth Plenum of the 19th Central Committee of the Communist Party of China, made on Oct 31, 2019. It tasks the central government to focus on the resolution of those deep-seated contradictions and problems that affect Hong Kong’s social stability and long-term development.

In a speech delivered in July, Xia Baolong, director of the Hong Kong and Macao Affairs Office of the State Council, expressed his deep solicitude for the common people of Hong Kong, particularly those disadvantaged and underprivileged. He eagerly expects that by 2049, Hong Kong’s economy will be more prosperous, its society will be more harmonious and peaceful, its children will have more opportunities to receive a good education, its young people will have abundant opportunities for starting businesses and gainful employment and pursuing their dreams, and its elderly will enjoy a healthy and joyful life.

Accordingly, Beijing will definitely provide the necessary policies, resources and support to help Hong Kong cope with these difficult problems. Most importantly, Beijing has the ability to overcome the resistance of Hong Kong’s powerful interests to those significant institutional and policy reforms that are needed in resolving these problems. Simultaneously, Beijing will urge the HKSAR government and the patriotic elites to prioritize these problems, take strong and effective actions to resolve them, and hold the elites accountable for the outcomes.

The new Election Committee will strengthen Beijing’s hand in making sure that the HKSAR government and the patriotic elites do their job well. It is expected that after the new chief executive and the legislature have been elected, the Election Committee will continuously monitor their performance and urge them on to fulfill the expectations of Beijing and itself. In view of the fact that the new Election Committee is no longer dominated by the vested interests and has become more representative of the interests of the common people, it will be strongly motivated to make sure that public well-being is sincerely and actually served by Hong Kong’s governing elites.

Generally speaking, it is oxymoronic to say that elite politics can contribute to public well-being. Nevertheless, the unique situation of Hong Kong in this particular juncture of its historical development is very likely to pull off such an oxymoronic political feat.