By Chen Shuman and Chloe Xu 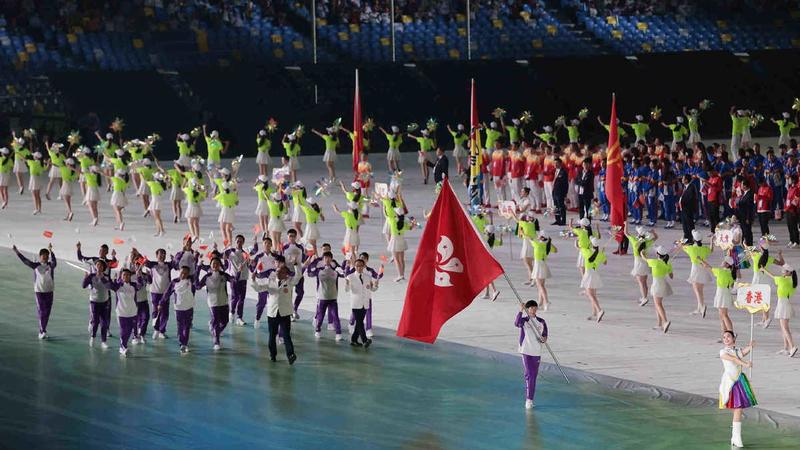 The Hong Kong Special Administrative Region sports delegation is seen at the opening ceremony of the 14th National Games at the Xi'an Olympic Center Stadium on Sept 15, 2021, in the capital of Northwest China's Shaanxi province. (XINHUA)

Hong Kong athletes are attempting to repeat their city's outstanding performance at the recently concluded Tokyo Olympics as they compete at the 14th National Games, which kicked off in Xi’an, Shaanxi province, on Wednesday.

Held every four years, the National Games are the highest-level sporting event in the country, with elite athletes gathering from China’s provinces, provincial-level municipalities, autonomous regions and special administrative regions. The event will air on RTHK until the event closes on Sept 27.

Hong Kong athletes have already won one gold and two bronzes at the National Games, as some events took place before the opening ceremony.

Hong Kong Chief Executive Carrie Lam Cheng Yuet-ngor on Tuesday said that she has confidence in the Hong Kong athletes, especially the younger ones, who are at the event, although a number of Tokyo Olympics medalists are not at the National Games for various reasons.

“We have high expectations of the Hong Kong athletes. We hope that they will do well,” Lam said.

At the Tokyo Olympics, Hong Kong athletes made history by bagging six medals, including one gold — the first-ever Olympic top prize for a Hong Kong athlete since the city’s return to the motherland in 1997— and two silvers.

Secretary for Home Affairs Caspar Tsui Ying-wai congratulated Lee on Tuesday for her further achievements at the National Games, saying that the cyclist gave her all in every competition and demonstrates sophisticated techniques.

“Her charm and graciousness have won our hearts and made her a role model for Hong Kong athletes”, Tsui said.

This year’s National Games marked the seventh such event at which Hong Kong has sent athletes since its return to the motherland in 1997.

Cliff Wong Tsan, principal of Hong Kong Fencing School and a former professional fencer, said he believes that Hong Kong has a great chance to grab medals in fencing at the games. Among the 24 local fencing athletes there some of them — like Edgar Cheung Ka-long, who won the gold medal at the men’s individual foil fencing in this year’s Tokyo Olympic Games — already have a history of outstanding performances in international competitions.

Participating in the National Games is a good opportunity not only to examine the strength of Hong Kong athletes as a whole, but also for athletes to increase their individual experience and get a clearer picture of their own competence, Wong said.