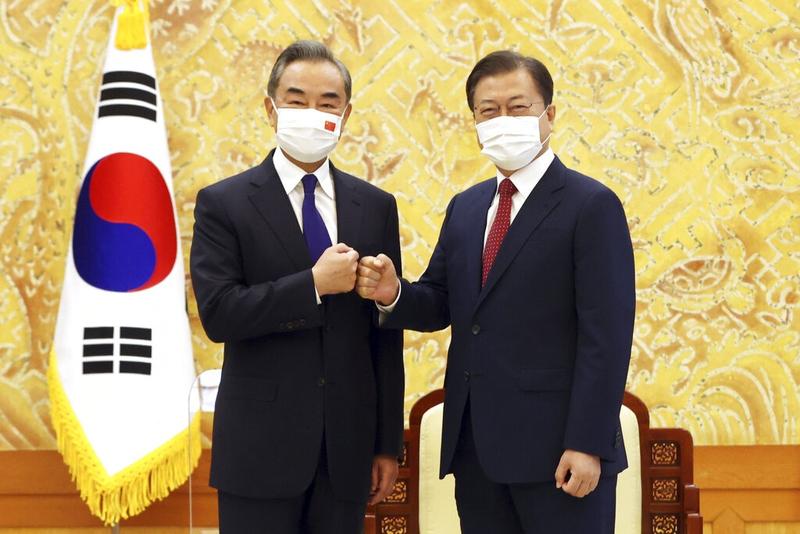 During their meeting, Moon said that in the face of the COVID-19 pandemic, South Korea and China have maintained close high-level communication, and the bilateral cooperation in economy and trade has managed to grow amid broad downward pressures, setting a good example of international anti-epidemic cooperation.

Moon expressed his hope to take the 30th anniversary of the establishment of diplomatic ties between the two countries as an opportunity to chart the course for the development of bilateral relations for the next 30 years and open the new future of more mature bilateral relations.

South Korea is ready to work with China to maintain the momentum of high-level exchanges, expand people-to-people exchanges and push for more fruitful cooperation in economy, trade and environmental protection, he said.

For his part, Wang said that China and South Korea are inseparable neighbors, as well as mutually beneficial and win-win partners.

Under the strategic guidance of the leaders of the two countries, the China-South Korea relations have maintained a sound momentum of development, and the friendship has been further deepened through joint efforts to fight the pandemic, Wang said.

The two sides should take the 30th anniversary of the establishment of diplomatic ties as an opportunity to give full play to the role of the committee for future development of China-South Korea relations, so as to push for greater development of bilateral relations, he said.

China firmly supports both Koreas in improving relations and will continue to play a constructive role in realizing lasting peace and stability on the Korean Peninsula, he added.