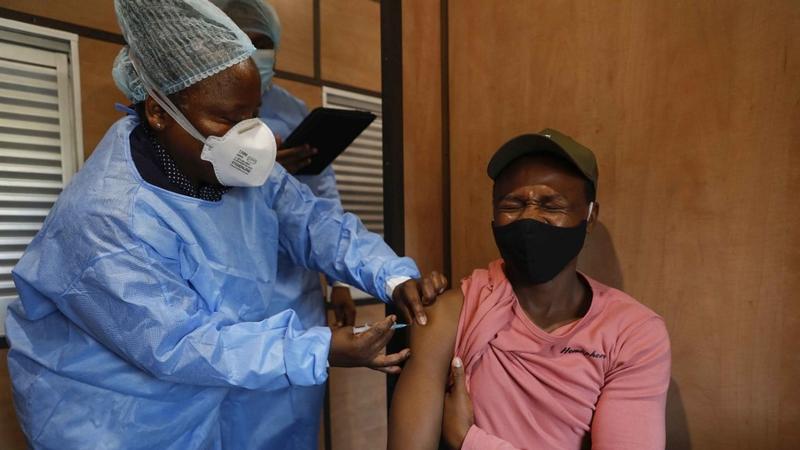 A man reacts as he receives a jab of the Johnson and Johnson vaccine from a healthcare worker inside the Transvaco COVID-19 vaccine train stationed at the Springs Train Station outside of Johannesburg, on Aug 25 2021. (PHILL MAGAKOE / AFP)

The world’s biggest number of HIV cases is complicating South Africa’s efforts to fight the coronavirus pandemic, raising the risk of more mutated versions emerging and spreading across the globe.

Many of the country’s 8.2 million HIV-infected people are immuno-compromised and scientists say they can harbor the coronavirus for longer, allowing it to mutate as it reproduces. A study of an HIV positive 36-year-old woman showed that COVID-19 stayed in her body for 216 days and mutated rapidly.

“There is good evidence that prolonged infection in immune-compromised individuals is one of the mechanisms for the emergence of SARS COVID-2 variants,” Tulio de Oliveira, a bioinformatics professor who runs gene-sequencing institutions at two South African universities, said at an Aug 30 immunology conference. “You have this massive virus evolution, really the virus accumulating over 30 mutations.”

The trouble is most of South Africa’s HIV-infected people are poor and marginalized. Many live in remote areas and have been largely left out of COVID-19 vaccination drives

As the world struggles to stay ahead of rapidly emerging variants, getting South Africa’s HIV-infected people vaccinated has become critical. The recent discovery of another mutation in the country after the virulent Beta variant late last year shows the risk to everyone of not urgently pushing vaccinations through.

The trouble is most of South Africa’s HIV-infected people are poor and marginalized. Many live in remote areas and have been largely left out of vaccination drives.

Awash in vaccines - with more than enough doses to inoculate the country’s 40 million adults - South Africa’s problem now is getting them into the arms of people who desperately need them.

The country’s vaccination drive has been patchy, at best.

In affluent northern Johannesburg, vaccine stations can be found at every mile or two, and popstars and talk-show hosts extol the virtue of getting shots on radio stations targeted at the rich and the urban.

In the rural and impoverished Northern Cape, it’s a very different story.

A 402-km drive over two days from the provincial capital of Kimberley across an arid semi-desert to the town of Upington found vaccines available only at one location. That’s because clinics in most towns can only administer shots on certain days and for limited hours. It’s little different in the impoverished townships that sit on the periphery of the biggest cities.

The health system is up against not just the difficulty of getting vaccines to remote areas, but also a lack of information and awareness.

The health system in South Africa is up against not just the difficulty of getting vaccines to remote areas, but also a lack of information and awareness

“The young people are scared; they hear rumors that people die after getting the vaccine,” said Lee-Ann Montse, an HIV counselor, as she sat outside the refurbished shipping containers that serve as a clinic in Schmidtsdrift, a village 50 miles west of Kimberley.

It doesn’t help that some people live as far as 9 km from the clinic, and in an area with rampant unemployment, transport is a challenge, the 33-year-old said.

Some days, only two or three people arrive to register for shots, she said. 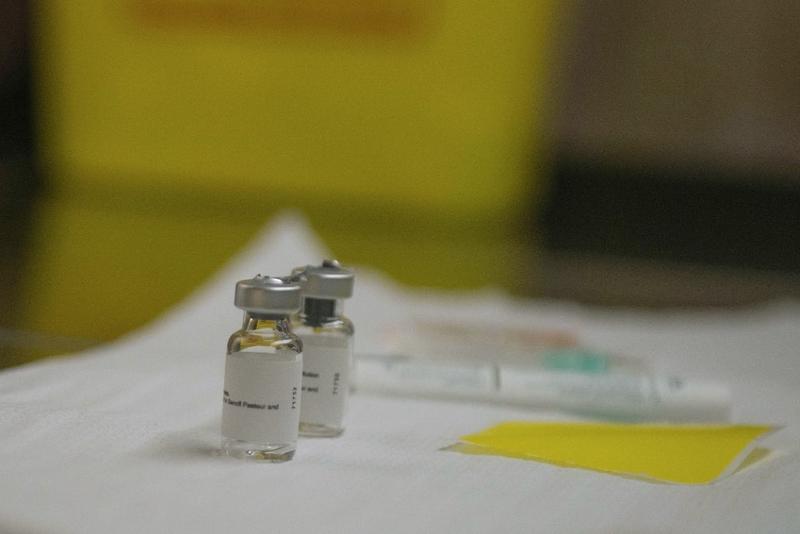 A picture taken on Nov 30, 2016 shows an experimental vaccine against the AIDS virus in Shoshaguve, near Pretoria, as South Africa launched a major clinical trial of the experimental vaccine, which scientists hope could be the "final nail in the coffin" for the disease. (MUJAHID SAFODIEN / AFP)

The extent of the disinformation and its impact are demonstrated by the experience of Schalk van der Merwe, who grows raisins and nuts and rears livestock near the town of Groblershoop in the Northern Cape.

When he encouraged his workers to register for vaccination, only three were willing. After bringing a nurse from the town clinic to his farm to answer questions, ranging from whether people can get vaccinated if they are HIV positive to if it will affect fertility, 93 people came forward.

“We’ve had a strategy of taking the people to the vaccine, but given the demographic breakup of our country, with 25 to 26 million people who are largely sitting in townships or remote areas of the country, vaccines need to be taken to them," said Stavros Nicolaou, head of the health-work unit at Business for South Africa, an industry group that’s working with the government. “They don’t have all the information or digital access.”

South Africa has been hit the hardest in Africa by the coronavirus, with about 2.9 million confirmed cases. Excess death numbers show that more than 250,000 people who wouldn’t normally have died have perished during the pandemic - or one in 240 South Africans.

We’ve had a strategy of taking the people to the vaccine, but given the demographic breakup of our country, with 25 to 26 million people who are largely sitting in townships or remote areas of the country, vaccines need to be taken to them ... They don’t have all the information or digital access.

Stavros Nicolaou, head of the health-work unit at Business for South Africa

Even in the face of such numbers, people like Themba Maseko say their main preoccupation is unemployment - at 34.4 percent, South Africa has the highest rate of joblessness among the 82 countries tracked by Bloomberg.

“I don’t see how getting vaccinated will help me solve some of the immediate problems facing me and my family,” said the 43-year-old father of two in Mabopane, a township about 24 km northwest of South Africa’s capital, Pretoria.

Like other impoverished townships, Mabopane counts a sizable number of people who are HIV positive, making it a high-risk area.

South Africa has struggled with HIV and the disease it causes, AIDS, for more than three decades.

Last year, 13.7 percent of South Africans were estimated to be infected with HIV, according to the National Statistics Agency.

While deaths have been capped thanks to the world’s biggest antiretroviral treatment program, COVID-19 has added a new wrinkle to their plight.

The Beta variant, which cut the efficacy of the AstraZeneca Plc shot and led to dozens of countries banning travel from South Africa, emerged after a surge of cases in Nelson Mandela Bay.

That region has the lowest uptake of antiretrovirals used to treat HIV, meaning that many people there may be immuno-compromised, according to de Oliveira.

And while the newer South African mutation is being studied by the World Health Organization to determine if it’s a variant of interest, its emergence shows the risks of large swaths of unvaccinated people.

Only about 7.4 million people, or about 18.5 percent of the adult population in the country, are fully vaccinated.

“South Africa really risks becoming one of the mutation factories of the world,” de Oliveira said.