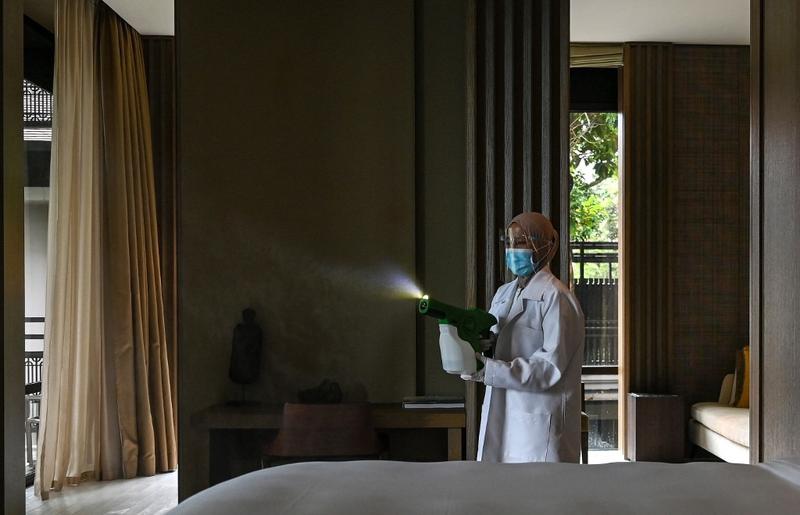 A housekeeping worker sanitizes a bedroom at the Ritz-Carlton hotel in Langkawi on Sept 15, 2021, as the Malaysian holiday island is set to reopen to domestic tourists on Sept 16 following closures due to restrictions to halt the spread of the coronavirus. (MOHD RASFAN / AFP)

Langkawi, a cluster of 99 islands in the Straits of Malacca, will reopen from Sept 16 to fully vaccinated travellers as part of a domestic tourism bubble, with strict protocols in place to thwart the spread of the coronavirus.

The plan is similar to that introduced in Thailand, which started with the July reopening of Phuket, 220 km north of Langkawi, to vaccinated foreign tourists. Malaysia has yet to invite foreign tourists to return.

Like Phuket, Langkawi, known for its beaches, geoparks, bird life and rock formations, is not expecting huge numbers initially, with 400,000 visitors targeted by the end of the year and estimated revenues of 165 million ringgit (US$39.66 million).

"We still do not want congestion even though we need a high number. What is important is that we can control the tourists to ensure their compliance," said Tuan Nasaruddin Abdul Muttalib, head of the Langkawi development authority.

Malaysia has recorded 2 million coronavirus cases overall among its 32 million population, one of Asia's highest per-capita infection rates, with more than 20,000 deaths.

Its vaccination program has progressed faster than its neighbours, with more than half the population inoculated, in the hope of a quicker return to normalcy.

A curfew imposed on more than two million people in the 12 Sydney suburbs hardest hit by the spread of the coronavirus Delta variant will end on Wednesday night, authorities said, stopping short of easing more lockdown restrictions.

Officials said first-dose COVID-19 vaccination levels have reached 80 percent of the New South Wales (NSW) adult population, while the dual-dose rate in Sydney's home state stands at 48 percent now. That's above the national average of 43 percent, but well below the 70 percent level that will trigger the easing of other curbs first imposed three months ago.

Authorities expect to achieve the 70 percent rate around the middle of next month, and plans to relax more restrictions once it has climbed to 80 percent.

"The stabilization and decline in some areas of concern are pleasing and we are at a critical stage ... but the best advice we have is that it's too early and too risky to do anything further today," Premier Gladys Berejiklian said during a media conference in Sydney.

Berejiklian warned it would be against the law for the unvaccinated to attend any public venues once the state hits 70 percent, when the fully vaccinated are promised more freedom.

New South Wales, the epicentre of Australia's Delta outbreak, reported a slight rise in new infections to 1,259, the majority in Sydney, from 1,127 on Tuesday, and 12 deaths.

Australia is struggling to quell a third wave of infections that has hit its two largest cities, Sydney and Melbourne, and the capital Canberra, forcing nearly half the country's 25 million people into strict stay-at-home restrictions.

Neighbouring Victoria state on Wednesday said new cases fell for the second straight day to 423 new cases as its first-dose vaccination rate neared the 70 percent level, about a week ahead of schedule, where some curbs on travel limit and outdoor exercise will be eased.

Melbourne, the state capital, is in an extended lockdown while most regional areas in Victoria came out of strict stay-at-home restrictions last week.

Brunei reported 108 new cases of COVID-19 on Tuesday, bringing the national tally to 4,431.

According to Brunei's Ministry of Health, the new cases include 107 local infections and one imported case. While the source of infection of 62 local cases is still under investigation, three new clusters have been detected, which brings the total number of active clusters to 76. 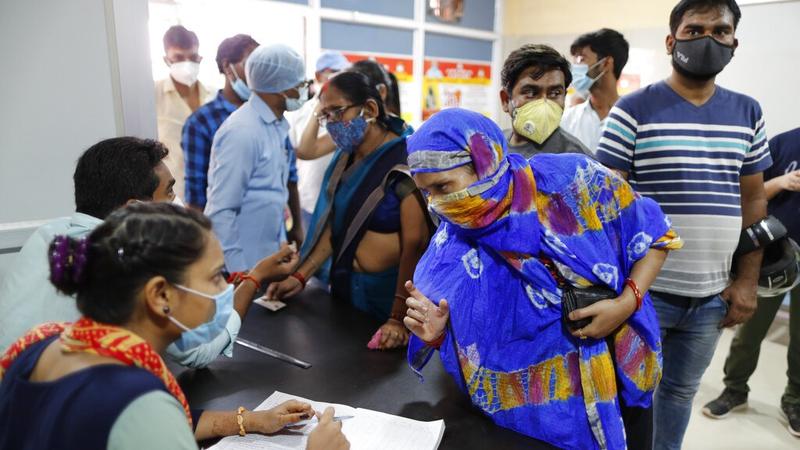 People wait to register themselves to receive a COVID-19 vaccine at a hospital in Varanasi, India, Aug 28, 2021. (RAJESH KUMAR SINGH / AP)

The World Health Organization said talks are underway with India for a resumption of vaccine exports to African countries following a pause during a deadly wave of infections earlier this year.

India had been supplying doses to COVAX, the equitable vaccine initiative on which most African countries are reliant. The government then moved to prioritize its own population after the Delta virus variant began sweeping through major cities.

The total number of confirmed covid infections in the country reached 33.32 million, according to the data. 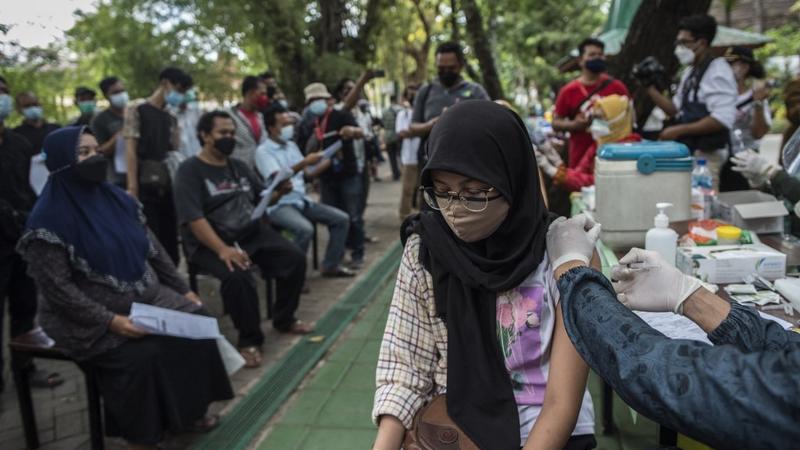 A health worker inoculates a woman with a dose of the Sinovac COVID-19 vaccine during a mass vaccination at a zoo in Surabaya on Sept 13, 2021. (JUNI KRISWANTO / AFP)

Indonesia plans to start opening its borders to foreigners in November once 70 percent of its target population have received at least one vaccine shot, its health minister said on Tuesday.

In an interview with Reuters, Budi Gunadi Sadikin said he was taking cues from the strategy adopted by Britain, which he said prioritized rolling out first doses and had achieved a lower rate of hospital admissions and fatalities.

"So for us we concentrate on the first dose. If we can vaccinate 70 percent of the target population of 208 million, if we can hit 140-150 million, 70 percent with the first dose, then we can gradually start reopening," he said.

"And my calculation is that will be reached by November."

The November 2021 timeline is the first time a senior Indonesian minister has committed publicly to a dateline for reopening the country’s borders.

Only foreign nationals who have diplomatic or working visas, or are eligible for other exemptions, are permitted to enter Indonesia.

Budi said border restrictions would be eased even further once 70 percent of the target population had received two doses.

Indonesia has recorded more than 4.1 million coronavirus cases and 139,000 deaths from COVID-19, but the positivity rate - the number of those tested who are positive - has dropped. It was 31 percent in late July, but was 2 percent on Tuesday.

Social restrictions have been in place since early July, but have gradually eased to allow malls, restaurants, cinemas and factories to operate at limited and conditional capacity.

Southeast Asia’s largest economy, struck by one of the worst COVID-19 outbreaks in Asia, has vaccinated about 25 percent of its target population but Budi said vaccine rates would need to be almost doubled to 2 million shots per day by deploying the police and army to help dispense shots.

Indonesia's inoculation program has been hampered by distribution and logistics problems, and vaccine hesitancy, but it hopes more than 140 million people will have been vaccinated twice by next March.

The pandemic has so far claimed 115,167 lives in the country, after 408 new deaths were registered in the past 24 hours, said Iran's Ministry of Health and Medical Education. 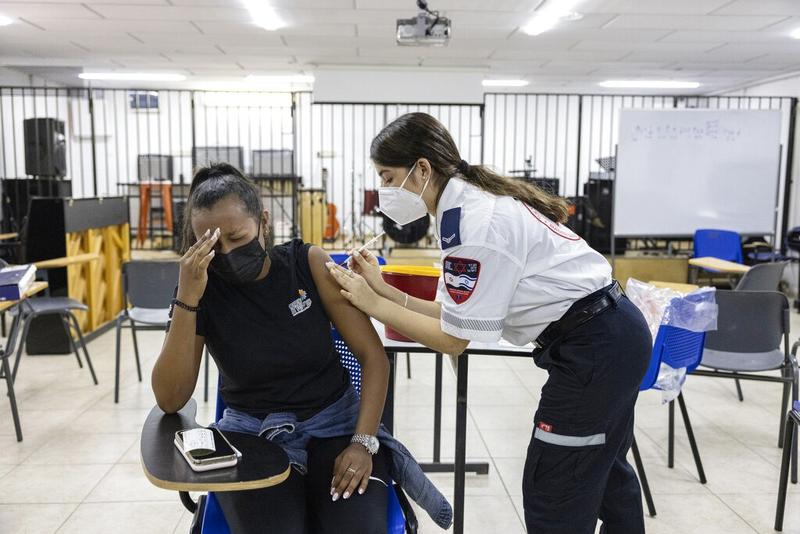 The ministry also reported 44 new deaths from the virus, taking the death toll in the country to 7,428, while the number of patients in serious condition decreased from 691 to 673, the ministry said.

Lao health authorities are considering the option of a third dose of COVID-19 vaccine in the future, to further boost human body’s immune system against new COVID-19 strains such as the Delta variant, local media reported Wednesday.

Studies are underway in Laos on the effectiveness of a third dose of vaccine to prevent the new variants from taking hold, in close cooperation with the World Health Organization, the Vientiane Times daily said.

Director General of the Department of Communicable Disease Control under the Lao Ministry of Health, Rattanaxay Phetsouvanh, on Tuesday told the newspaper that studies are taking place to try to determine whether a third-dose COVID-19 vaccine would boost immunity.

There are concerns that the spike in COVID-19 cases in Laos and numerous other countries is attributable to the spread of the more infectious Delta variant, which was first detected in India.

"Two beavers died in mysterious circumstances in our country last month, and laboratory test results have showed that the COVID-19 caused the deaths," Adiyasuren Tuvshinbayar, an expert of the authority, told Xinhua over the phone.

This is the first confirmed cases of animal deaths in the country due to COVID-19.

The dead beavers were from the Beaver Breeding Center at the Environmental Department of the capital Ulan Bator, and another seven beavers of the center have tested positive for the virus, according to the country's National Center for Zoonotic Diseases (NCZD).

Beaver ranchers of the center tested positive for COVID-19 in August and the beavers may have contracted the virus from their ranchers, Nyamdorj Tsogbadrakh, director of the NCZD, told Xinhua.

The cats may have contracted the virus from their owners, who have tested positive for the virus, the center said, urging the public to protect both themselves and their pets from the virus.

New Zealand reported 14 new community cases of Delta variant of COVID-19 on Wednesday, all in the largest city Auckland, which brought the total number of cases in the country's community outbreak to 983.

The COVID-19 positivity rate fell to 4.78 percent in Pakistan and the country reported 2,714 new cases over the last 24 hours, the National Command and Operation Center (NCOC) said on Wednesday.

The last time the country's positivity rate was less than 5 percent was on July 24.

According to the NCOC, the pandemic killed 73 people over the last 24 hours in the country, increasing the total death toll to 26,938. 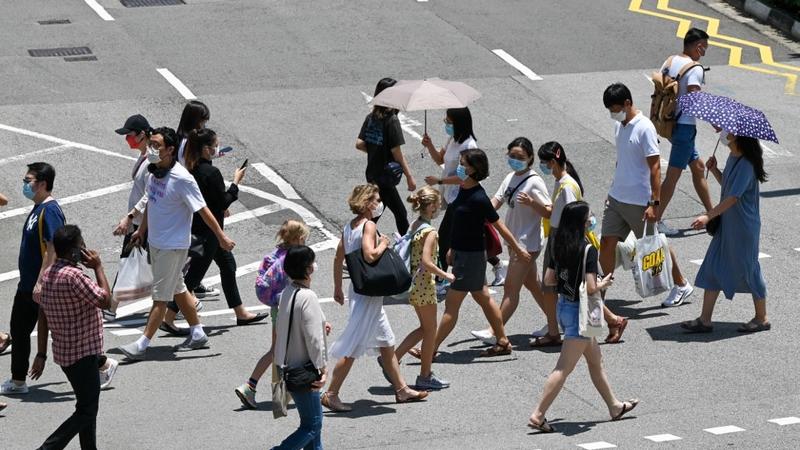 Singapore recorded a total of 837 new cases on Tuesday, including five imported infections, according to the Ministry of Health, more than doubling from a week before.

The number of hospitalized patients reached 809, with 75 of them suffering serious illness that require oxygen supplementation, and nine in intensive care, the ministry said in a statement.

Over the past 28 days, the proportion of unvaccinated people who became severely ill or died was 6.1 percent, while the rate was 1.1 percent for those who are fully vaccinated.

South Korea reported 2,080 more cases of COVID-19 as of midnight Tuesday compared to 24 hours ago, raising the total number of infections to 277,989.

Thailand on Wednesday recorded 13,798 new COVID-19 cases and 144 more deaths, according to the Center for COVID-19 Situation Administration (CCSA).

The CCSA, the country's COVID-19 task force, said most of the new infections were detected at factories, markets and construction worker camp sites.

The capital city Bangkok confirmed 2,772 new cases during the past 24 hours, topping the list by regions.

The country's total number of infections has risen to more than 1.42 million, while that of the death toll has reached 14,765.

The Philippines' Department of Health (DOH) reported 16,989 new COVID-19 infections on Wednesday, bringing the total number of confirmed cases in the Southeast Asian country to 2,283,011.

The DOH also reported 214 new deaths from the pandemic, raising the country's coronavirus death toll to 35,742.

Vietnam’s commercial hub Ho Chi Minh City plans to gradually reopen its economy in three phases beginning Oct. 1 if the virus outbreak is considered contained, the city’s media center reported on its website, citing information from a meeting led by the city’s party chief on Tuesday.

Party Chief Nguyen Van Nen said plans call for the reopening of “eligible” factories in the suburban districts of Can Gio, Cu Chi and 7, home to several industrial parks and global suppliers, according to the post.

The statement did not provide a clear timing for resumption of factories or say whether all plants would be allowed to resume production.