Call of the muse 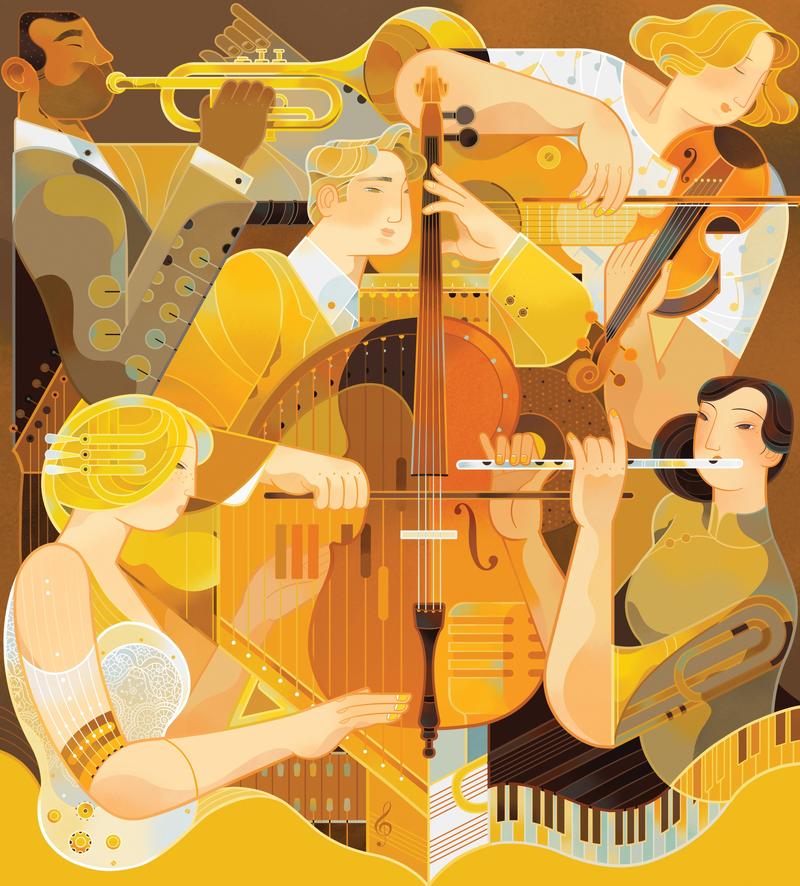 One of Astrid Poghosyan’s favorite Disney characters is Mulan. As a young girl at home in Armenia, she watched the animated movie featuring the maiden with dark brown eyes and long black hair.

She was drawn to the folk tale about the courageous, loyal and self-reliant Mulan, who takes her ailing father’s place in the military and disguises herself as a man to go to war.

In addition to Mulan, Poghosyan became interested in traditional Chinese culture portrayed in the film, such as dresses, decorations and natural scenery, which made her determined to visit China.

In 2009, when she was 16, she arrived to study violin at the Shanghai Conservatory of Music after winning a scholarship.

In early 2017, just before she obtained her master’s from the conservatory and was due to return to Armenia, the Chinese government introduced a program for international students to obtain work permits after graduation. Previously, such students had to have a minimum of two years’ work experience outside China before they could apply for a visa.

After she graduated, Poghosyan decided to remain in China, landing a job with the Shanghai Symphony Orchestra. Now working as assistant to Zhou Ping, the orchestra’s president, she is the ensemble’s first non-Chinese management employee.

“Working and living in China has been an interesting journey. I came here to study music, but I never expected to find a job and live here,” said Poghosyan, 28, who was born and raised in Yerevan, the Armenian capital. She added that the history of exchanges between China and Armenia can be traced to the ancient Silk Road.

After moving to Shanghai, she was given the name Xing Xing by her Chinese teacher, which translates as “star”.

Poghosyan first learned about China from her mother, who after visiting the country brought her a doll dressed in a red and white qipao. She said her mother also encouraged her to study music as a child.

“I have two elder sisters, who studied piano and violin. We had a piano in our home, which I could play anytime I wanted, but my sister who studied violin wouldn’t let me touch her instrument, which made me curious and eager to play it,” Poghosyan said.

“When I was old enough, my mother asked me what musical instrument I wanted to learn, and I immediately said violin. I guess that I decided my own destiny.”

As Poghosyan was the only foreign student in her class, she learned about Chinese culture from her classmates. During her studies at the Shanghai Conservatory of Music, she was introduced to traditional Chinese music and Chinese folk music. She particularly loves the sound of the guzheng, a Chinese zither.

As a student, Poghosyan also listened to works by Chinese composers, including Huang Zi (1904-38), who trained in the United States at Oberlin College in Ohio and at Yale University.

“That’s the power of music. It reaches people of different nationalities,” Poghosyan said.

She added that her violin teacher Xu Weiling, who she refers to as her “Chinese mother”, has been understanding and supportive.

“When I told her about my job as a management employee with the Shanghai Symphony Orchestra, she was highly supportive because she knows me well,” Poghosyan said. The Armenian added that she was an extremely active student at university, where she played violin and took part in many school events as a volunteer.

Poghosyan is just one of the foreign musicians working with the Shanghai orchestra.

The orchestra, according to Zhou, its president, features 10 musicians from countries around the world, including Russia, the US, South Korea, Italy and Japan.

“Thanks to China’s rapid economic development, the classical music scene is also booming, with more venues popping up and more symphony orchestras being founded, presenting opportunities not only for Chinese musicians but also for those from around the world,” Zhou said.

“Due to their different training backgrounds, the musicians have diverse playing styles. With their rich experience of working with orchestras worldwide, they listen to each other and find a common voice. This blend of local and international talent is a wonderful cultural exchange.” 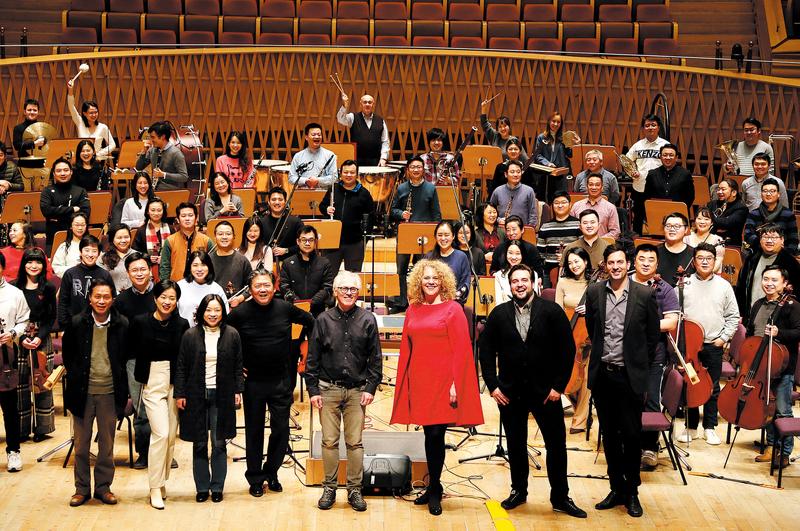 The Shanghai Symphony Orchestra has attracted musicians from countries around the world, including Russia, the United States, South Korea, Italy and Japan. (PHOTO PROVIDED TO CHINA DAILY)

The Shanghai Symphony Orchestra celebrated its 140th anniversary in 2019 by touring worldwide, making its debut performance at the Edinburgh International Festival in Scotland.

In 2018, it signed with the Deutsche Grammophon record label. On July 9, under the baton of conductor Yu Long, it released a new album, The Song of the Earth, which was recorded in Shanghai and features soloists Michelle DeYoung, Brian Jagde, Zhang Liping and Shen Yang.

Peter Solomon, principal French horn player with the Shanghai Symphony Orchestra, said: “The growth of classical music in China over the past 10 years has been extraordinary. The orchestra was very good when I arrived. It is exceptional now. I think it is very rare for an orchestra to improve so much so quickly.”

Solomon, who joined the orchestra in 2012, has made Shanghai his home. He has worked with many orchestras in the US and with the Daegu Symphony Orchestra in South Korea before arriving in Shanghai.

He starts a typical day preparing his children for school. Solomon then usually practices 20 minutes of tai chi, which he has studied in Shanghai for four years. He arrives at work early to give himself plenty of time to warm up before rehearsals begin at 10 am. In addition to regular evening concerts, he teaches students at the Shanghai Orchestra Academy, an orchestral training program run by a partnership comprising the Shanghai Symphony Orchestra, the New York Philharmonic and the Shanghai Conservatory of Music.

Speaking of his life in the city and work with the Shanghai orchestra, Solomon said he will always remember the first concert it gave after the pandemic, as it was such an emotional event. With a program that included Beethoven’s Symphony No. 6 conducted by the orchestra’s music director Yu Long, the concert featured music to match the occasion.

Oboist Jung-Jun Ham, 37, who was born to a musical family in Seoul, the South Korean capital, started to learn the instrument when he was 16 and has played English horn with the Shanghai Symphony Orchestra since 2015. He said, “I’m convinced that Asia’s classical music scene has become stronger and more promising in terms of the music offered.”

In China, he has been impressed by senior concertgoers, describing them as “the authentic supporters who have set the stage for classical music in the nation”.

“Looking back, I was eager to know what it would be like to work on music in such a large country, and that initial curiosity still gives me great pleasure,” he said.

In about 2014, there were some 30 professional symphony orchestras in the country. Just three years later, the number had grown to more than 80.

“There are opportunities not only for young Chinese musicians but also for those from around the world,” Chen said. “As symphony orchestras mushroom around China, overseas musicians are heading to the country to make the most of these new opportunities.”

Chen is also director of the Suzhou Symphony Orchestra, which was founded in 2016 and is based at the Suzhou Culture and Arts Center Grand Theater in Suzhou, Jiangsu province. With an average age of 30, the orchestra features about 80 musicians from 17 countries and regions, including China, the United Kingdom, Japan, South Korea and the US.

Suzhou has a rich history of ancient art forms, such as ping tan — ancient Chinese singing and storytelling that is some 400 years old — and Kunqu Opera, one of the oldest forms of Chinese opera that dates back more than 600 years.

Chen said the birth of the Suzhou Symphony Orchestra was a unique experience and helped create special bonds with musicians from around the world.

In 2018, the orchestra launched the Jinji Lake International Composition Competition, inviting composers from around the world to create music inspired by the city of Suzhou.

In July, the orchestra launched its 2021-22 season, which will feature more than 50 concerts and celebrated musicians such as composer Tan Dun, violinist Ning Feng, pianist Zhang Haochen and tenor Shen Yang.

Chen, who is in his 60s, said: “I had never built a symphony orchestra from scratch. It’s very rewarding, but challenging.”

Japanese clarinetist Tomoyo Kobayashi, 35, who joined the Suzhou Symphony Orchestra when it was launched, said: “It was very exciting to come to Suzhou, because the orchestra was completely new and I thought it would be very interesting. I searched on the internet for information about Suzhou before I auditioned, and it is a very beautiful and traditional city.”

Kobayashi started to play piano when she was 3 and learned the clarinet at age 15. She graduated from the Kunitachi College of Music in Tokyo and furthered her music studies in Paris. Before joining the Suzhou orchestra, she played with the Haifa Symphony Orchestra in Israel, the Nanjing Symphony Orchestra and at Shanghai Opera House.

With young and talented colleagues, Kobayashi has played not only in China but around the world with the Suzhou Symphony Orchestra during the past five years.