US, allies urged to be responsible 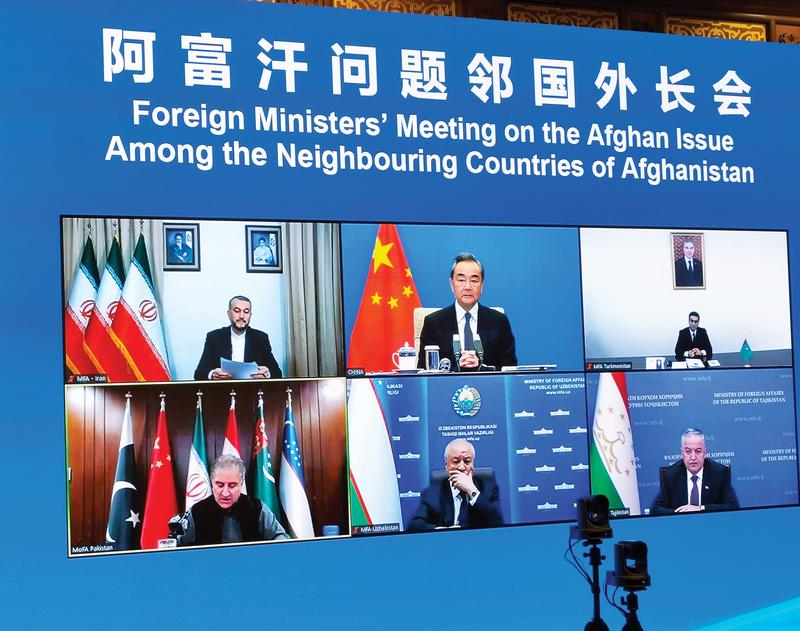 The first meeting of foreign ministers of Afghanistan’s neighboring countries is held on Sept 8. (PHOTO PROVIDED TO CHINA DAILY)

The United States and its allies should assume their due responsibilities on the Afghan issue while learning profound lessons, Chinese State Councilor and Foreign Minister Wang Yi told the first meeting of foreign ministers of Afghanistan’s neighboring countries via video link.

“The common view of the international community is that the end of military intervention by the United States and its allies should be the beginning of them assuming their responsibilities,” Wang said on Sept 8.

“They are more obligated than any other country to provide economic, livelihood and humanitarian assistance to the Afghan people, and help Afghanistan maintain stability, prevent chaos and move toward sound development on the premise of respecting the sovereignty and independence of Afghanistan.”

Wang said the hasty withdrawal of US troops from Afghanistan had left the country facing grave challenges, and some international forces will possibly create new difficulties for it by using political, economic and financial means.

Noting that Afghanistan is now standing at the crossroads of history, Wang cited several problems facing the nation, such as humanitarian issues and matters related to people’s livelihoods and the COVID-19 pandemic.

The neighboring countries, more than anyone else, want to help Afghanistan get out of chaos, Wang said. They should exert a positive influence on the basis of respecting the sovereignty and territorial integrity of Afghanistan.

China has decided to provide Afghanistan with emergency humanitarian assistance worth 200 million yuan (US$31 million), he said.

Beijing is also willing to help Afghanistan with projects to improve its people’s living conditions when the security situation allows, and support its peaceful reconstruction and economic development.

China will donate 3 million doses of COVID-19 vaccines to Afghanistan, and is ready to provide the country with more anti-pandemic and emergency supplies, Wang said, adding that China is also ready to study the possibility of resuming cargo transportation between the two countries.

Qureshi said the well-being of the Afghan people must remain the focus, as they had suffered enormously due to conflict and instability for decades.

He emphasized the importance of proceeding with a realistic approach in view of the changed reality in Afghanistan. A shared approach would help Afghanistan on its path to peace and stability and would result in enhanced economic integration and realization of connectivity projects.

During the meeting, Qureshi outlined the need for the international community to take up resolution of the humanitarian crisis in Afghanistan and preventing economic meltdown in the country as key priorities.

Pakistan’s Foreign Office said in a statement that three C-130 aircraft bearing food and medicines were being dispatched to Afghanistan. After the first immediate tranche through air, further supplies would continue through land routes.

Also on Sept 8, Russian President Vladimir Putin and European Council President Charles Michel in a phone conversation expressed readiness for cooperation to stabilize the situation in Afghanistan and avoid the risk of terrorism, extremism and drug trafficking.

A press release by the Kremlin said both parties stressed the importance of maintaining peace, preventing violence, and launching a practical intra-Afghan dialogue to guarantee the country’s integrity, with due consideration for the interests of all groups in the country.

Russia will observe how the Taliban’s recent statements and promises match its actions, Kremlin spokesman Dmitry Peskov told a daily briefing on Sept 7.