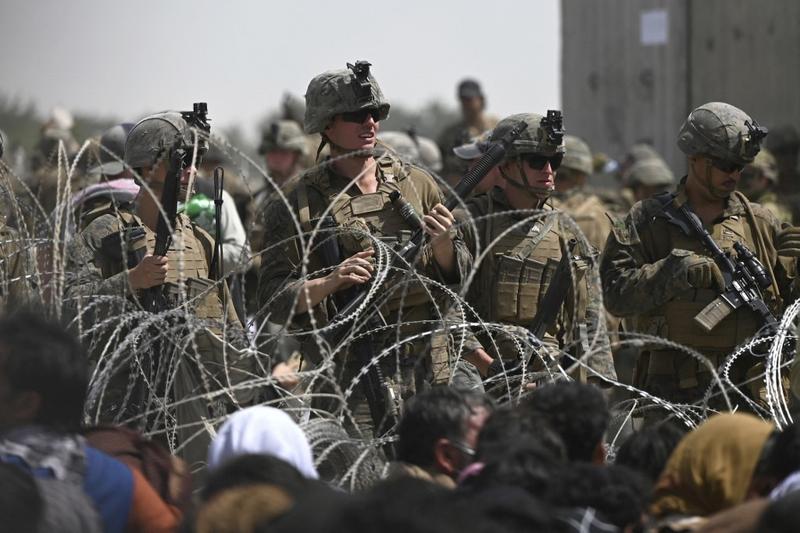 US soldiers stand guard behind barbed wire as Afghans sit on a roadside near the military part of the airport in Kabul on August 20, 2021, hoping to flee from the country after the Taliban's military takeover of Afghanistan. (WAKIL KOHSAR / AFP)

WASHINGTON / KABUL - Former President Donald Trump launched on Saturday a sustained attack on President Joe Biden's handling of the retreat of US forces from Afghanistan, which he called "the greatest foreign policy humiliation" in US history.

Trump, a Republican who has dangled the possibility of running again for president in 2024, has repeatedly blamed Biden, a Democrat, for Afghanistan's fall to the Taliban, even though the US withdrawal that triggered the collapse was negotiated by his own administration.

Taliban leaders are trying to hammer out a new government after their forces swept across the country as US-led forces pulled out after two decades, with the Western-backed government and military crumbling

"Biden’s botched exit from Afghanistan is the most astonishing display of gross incompetence by a nation’s leader, perhaps at any time," Trump said at a boisterous rally packed with his supporters near Cullman, Alabama.

Taliban leaders are trying to hammer out a new government after their forces swept across the country as US-led forces pulled out after two decades, with the Western-backed government and military crumbling.

For his part, Biden has criticized the Afghan military for refusing to fight, denounced the now-ousted Afghan government and declared he inherited a bad withdrawal agreement from Trump.

At the rally, Trump blamed the situation on Biden not having followed the plan his administration came up with and bemoaned US personnel and equipment being left behind as troops withdrew.

"This is not a withdrawal. This was a total a surrender," he said.

ALSO READ: Taliban say want ties with all countries, including US

Trump said the Taliban, with whom he had negotiated, respected him. He suggested the quick takeover of Afghanistan would not have happened if he was still in office.

Meanwhile, the United States and Germany told their citizens in Afghanistan on Saturday to avoid travelling to Kabul airport, citing security risks as thousands of desperate people gathered trying to flee almost a week after the Taliban took control.

The Taliban's co-founder, Mullah Baradar, arrived in the Afghan capital for talks with other leaders.

Crowds have grown at the airport in the heat and dust of the day over the past week, hindering operations as the United States and other nations attempt to evacuate thousands of their diplomats and civilians as well as numerous Afghans. Mothers, fathers and children have pushed up against concrete blast walls in the crush as they seek to get a flight out.

Crowds have grown at the airport in the heat and dust of the day over the past week, hindering operations as the United States and other nations attempt to evacuate thousands of their diplomats and civilians as well as numerous Afghans. Mothers, fathers and children have pushed up against concrete blast walls in the crush as they seek to get a flight out

The Taliban have urged those without travel documents to go home. At least 12 people have been killed in and around the single-runway airfield since last Sunday, when the Taliban seized control of Afghanistan, NATO and Taliban officials said.

"Because of potential security threats outside the gates at the Kabul airport, we are advising US citizens to avoid travelling to the airport and to avoid airport gates at this time unless you receive individual instructions from a US government representative to do so," a US Embassy advisory said.

The German Embassy warned its citizens in an email that Taliban forces were conducting increasingly strict controls in its immediate vicinity.

Army Major General William Taylor, with the US military's Joint Staff, told a Pentagon briefing that 5,800 US troops remain at the airport and that the facility "remains secure". Taylor said some gates into the airport were temporarily closed and reopened over the past day to facilitate a safe influx of evacuees.

A Taliban official, speaking to Reuters, said security risks could not be ruled out but that the group was "aiming to improve the situation and provide a smooth exit" for people trying to leave over the weekend.

Taylor said the United States in the past week has evacuated 17,000 people, including 2,500 Americans, from Kabul. He said in the past day 3,800 people were evacuated on US military and chartered flights.

President Joe Biden will provide an update on Sunday on the administration's response to Hurricane Henri and the evacuation of American citizens and refugees from Afghanistan, the White House said.

The president is to speak at 4 pm EDT (2000 GMT), after meeting with his national security team to hear intelligence, security and diplomatic updates on the evolving situation in Afghanistan, the White House said.

The Biden administration has told US airlines they could be ordered to help ferry people who have been evacuated from Afghanistan, two officials said on Saturday.

Speaking a day after Biden promised to evacuate "any American who wants to come home," Pentagon spokesman John Kirby said he did not have a "perfect figure" on how many US citizens remain in Kabul and Afghanistan more broadly, though officials have indicated it is thousands.

Kirby declined to describe the specific "threat dynamics" in Kabul but called the security situation "fluid and dynamic."

"We're fighting against both time and space," Kirby said.

In Qatar, which is hosting thousands of evacuees until they can enter a third country, Afghans who fled described in interviews with Reuters despair at leaving behind loved ones while facing their own uncertain future.

Switzerland postponed a charter flight from Kabul because of the chaos at the airport.

The Taliban official, speaking on condition of anonymity, said Baradar will meet militant commanders, former government leaders and policy makers, religious scholars and others. The official said the group plans to prepare a new model for governing Afghanistan in the next few weeks, with separate teams tackling internal security and financial issues.

The Taliban have sought to present a more moderate face since returning to power, saying they want peace and will respect the rights of women within the framework of Islamic law.