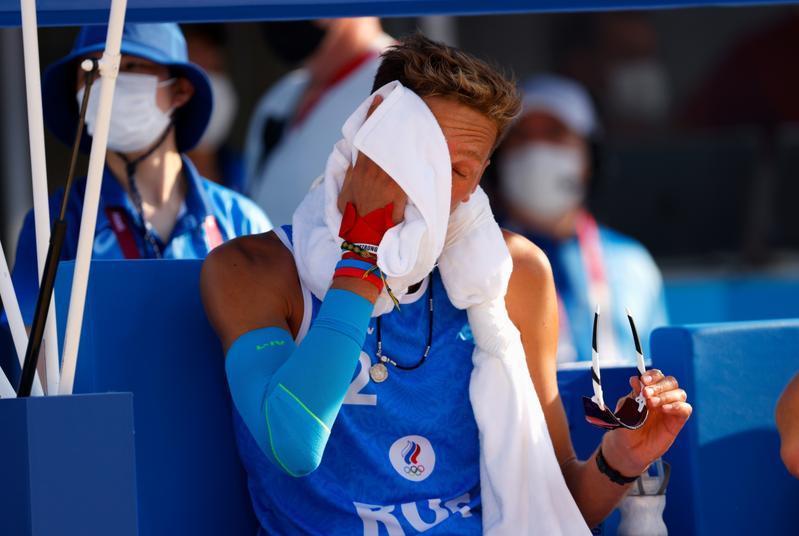 Konstantin Semenov of Team ROC uses a towel packed with ice during game against Team Spain in the Men's Preliminary - Pool A on day one of the Tokyo 2020 Olympic Games at Shiokaze Park on July 24, 2021 in Tokyo, Japan. (PHOTO / BLOOMBERG)

Japan’s heat is taking a toll on the summer Olympics, making it more difficult for athletes already facing challenges from the pandemic to compete at their highest level.

Tokyo’s mean temperature has climbed by 2.86 degrees Celsius since 1900, more than three times as fast as the world’s average, according to a report by the British Association for Sustainable Sport

A Russian archer fainted on Friday as Tokyo’s temperatures climbed to as high as 34 degrees Celsius (93 degrees Fahrenheit), while tennis stars including Novak Djokovic have called for a delay in the starting time of their matches to avoid peak heat hours, according to media reports.

Athletes got a temporary respite on Tuesday as a tropical storm ushered in cooler weather, but higher temperatures have returned and are expected to remain throughout the games as Tokyo’s summer gets into full swing. Over the next week, the Japan Meteorological Agency forecasts temperatures in the capital to reach highs of 32 to 33 degrees.

ALSO READ: Seeing's not believing: How doping has tainted athletics

While heat waves across the globe this summer are causing extreme weather from the US to China and Europe, Tokyo’s sweltering temperatures are roughly within the range seen in recent years. Still, climate change has made the city one of the fastest-growing hot spots in the world, and these games are poised to become one of the hottest in Olympics history, rivaling those held over the past 25 years in Beijing, Athens and Atlanta.

Tokyo’s mean temperature has climbed by 2.86 degrees Celsius since 1900, more than three times as fast as the world’s average, according to a report by the British Association for Sustainable Sport. The study, titled “Rings of Fire: How Heat Could Impact the 2021 Tokyo Olympics,” warned earlier this year that athletes are increasingly being asked to compete in environments that are becoming “too hostile” for the human body.

Across Japan, the number of people being taken to hospital with heatstroke roughly doubled to 8,122 in the week through Sunday compared to the previous week, according to the Fire and Disaster Management Agency. The situation raises even greater risks for those pushing their bodies to the limit during competition under direct exposure from the sun.

“Both myself and my opponent struggled in the heat, we had light heatstroke during the match and cramps after,” Japanese tennis player Taro Daniel tweeted Sunday after a weekend match in Tokyo.

Organizers have tried to take measures to alleviate the situation, including moving the marathon and competitive walking events to the northern island of Hokkaido to escape the heat. But in a twist of fate, the northern- most prefecture of Japan is now seeing record temperatures, with Asahikawa city hitting a record 36.2 degrees on Tuesday.

“A lot of the competition schedules have been built where possible depending on the sport, to avoid the hottest part of the day, but that’s not possible with every sport,” Kit McConnell, International Olympic Committee sports director, told reporters Sunday. “On top of that there’s really extensive heat countermeasures across all of the training and all of the competition.”

READ MORE: Biles out of next event at Tokyo Games

The weather situation during the current Olympics is far from the experience during the 1964 summer games in Tokyo, when temperatures were much lower. That’s not entirely due to global warming - it’s mostly because organizers decided to hold those games in October, to escape Tokyo’s summer heat.

The IOC is confident the Olympics will get past all the challenges this year. “I think we have to consider that sport in Japan can go ahead and does go ahead,” said spokesman Mark Adams.