A show of courage

By Deng Rui and Tan Yingzi 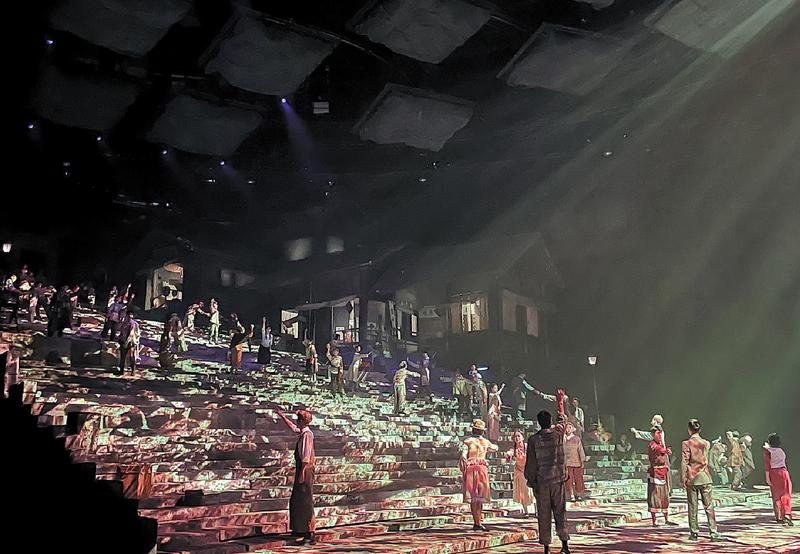 Chongqing 1949 is a historical stage extravaganza that centers around a group of revolutionaries who were imprisoned in Baigongguan and Zhazidong in Chongqing before the founding of New China. It premiered in Chongqing on July 1 to celebrate the 100th anniversary of the founding of the Communist Party of China. (TAN YINGZI / CHINA DAILY)

In the final scene of Chongqing 1949－once the People's Liberation Army and local people have taken control of Chongqing－a group of revolutionary martyrs of the Communist Party of China look back toward the audience and say in chorus as if they were communicating through time: "Please forget about us and dry your tears. Forget about the grief and look forward to a bright future."

The historical and innovatively presented stage extravaganza premiered in Chongqing on July 1 to celebrate the 100th anniversary of the founding of the Communist Party of China.

The 70-minute show centers around a group of revolutionaries who were imprisoned in Baigongguan and Zhazidong－two secret Kuomintang prisons used to punish Communist revolutionaries at the foot of the city's Gele Mountain. The revolutionaries chose death rather than surrender to the enemy's interrogations and cruel torture.

The show boasts a cast of more than 130, mostly young, performers. The youngest is 12 years old.

"I was totally immersed in the heavy historical tone of the magnificent stage play－it was their sacrifices that brought about our happiness," says Yang Xin, an audience member at the premiere.

In 1937, the Kuomintang government led by Chiang Kai-shek established Chongqing as China's temporary capital and the southwestern city began to play a critical role in the Asian theater of World War II.

During the War of Resistance Against Japanese Aggression (1931-45), several KMT prisons were supervised by the Sino-American Special Technical Cooperative Organization, which was established secretly in Chongqing in 1943. The United States used it to train and dispatch KMT agents.

On Nov 27, 1949, about two months after Mao Zedong declared the founding of the People's Republic of China in Beijing, SACO agents set fire to the male prison wards at the Zhazidong prison, killing all but 15 who managed to break through a section of wall.

In the two prisons, more than 300 revolutionaries were killed before the KMT fled to Taiwan.

The CPC liberated Chongqing three days later, which laid a solid foundation for the People's Liberation Army to free the entire southwestern region of China.

Today, the prisons are memorials which attract millions of visitors every year.

"Besides the social value, we hope the audience can appreciate the beauty of art," says Li Hanzhong, the chief director of Chongqing 1949.

Providing the audience with a unique perspective, the set is designed on a rotating 360-degree stage, which revolves on different tracks to create a multidimensional and immersive experience.

Several of the scenes, such as Ciqikou wharf, a ship and a memorial archway, take place on sets which sit on five smaller, rotatable stages, the heights of which vary from 16 meters to 20. The lightest of them weighs in at a not insignificant 20 metric tonnes.

"It is technically difficult," says Yuan Baoyu, the chief producer. "It's like keeping five six-story trains running at the speed of 1.2 meters per second on five respective tracks within the theater, without making any scratch or sound. They have to be absolutely safe and stable."

"It is a totally new take on the traditional stage play," says Zhang Xiaoke, chief planner of Chongqing 1949. "It is a combination of musical drama, dance drama and opera," Zhang says. "We use international stage art to tell this awe-inspiring story of the modern era and cater to a young audience. Montage techniques are also applied."

"I was impressed the very first time I saw the scripts," says well-known pop singer Sha Baoliang, who plays the leading role in the show, noting that it is the most exciting, complicated stage he has ever stood on.

"The feelings are too strong to describe."

Producer Song Xiaoping looks forward to the show becoming a cultural brand in the municipality, where no such "red tourism" show has been created before.

"As a private entrepreneur who was born and raised in Ciqikou, I feel a responsibility to create a historical show to present what has happened here and pay tribute to the Party, which has held our motherland together by breaking free of imperialist powers and bringing its people a good and prosperous life," Song says.

The performance project, with a total investment of 800 million yuan (US$123.9 million), took nearly three years to complete.

"The show is totally created by nongovernmental organizations, including the investors, the creative team and the performers. It is the best manifestation of ordinary people's love for the Party and for their country," says chief director Li.

"Red tourism shows such as Yan'an Nursery School in Yan'an, Shaanxi province, and There's a Mao Zedong in China in Shaoshan, Hunan province, have proved to be huge successes. A ticket is hard to get," says Li.

"We are creating a classic cultural tourism show rather than a short-term program. The show needs to be perfect to survive."

Chongqing 1949 will officially open to the public on Aug 1.