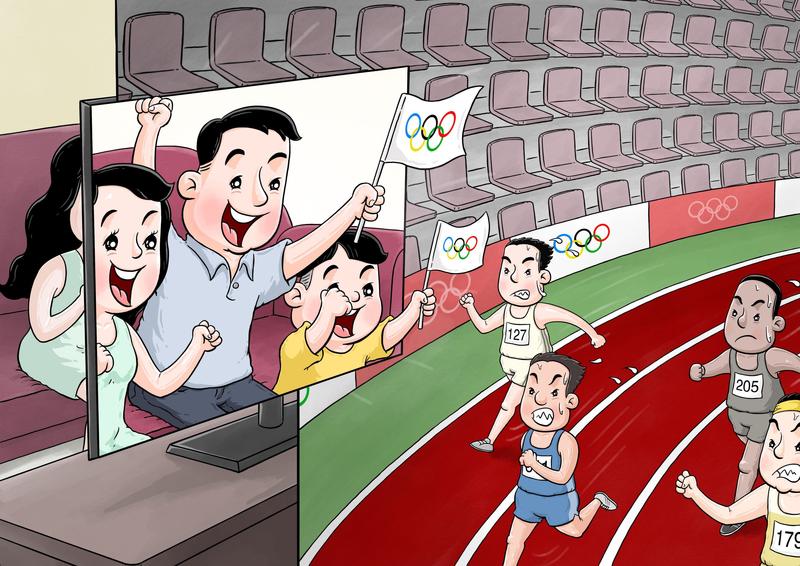 On July 8, the Japanese government declared a state of emergency in Tokyo until Aug 22, owing to the COVID-19 pandemic. That means the Tokyo Olympic Games (July 23-Aug 8) will be subject to strict limits on spectators for large events.

The new restrictions doubtless come as a disappointment to Japanese Prime Minister Yoshihide Suga, who has been eager to showcase the Games as a symbol of Japan's ability to overcome the difficulties it has faced since the 2011 earthquake and the Fukushima nuclear disaster. As such, there will be no roaring cheers at any of the races or other larger competitions. The festive mood in Tokyo has quickly evaporated, as has any hope of a boost to the local economy.

True, a state of emergency in Japan is much softer than the lockdowns imposed in many Western countries over the past 16 months. People can still carry on with an almost normal life of shopping and eating out, albeit with more restrictions on restaurants and large retailers' hours of operation. But this is the fourth declaration of a pandemic-induced state of emergency in Tokyo since April 2020, and restrictions on serving alcohol in restaurants have been added since the last one, because loud conversations without face masks are a suspected cause of the spread of COVID-19 clusters.

Although the Suga government has "requested" that people eschew unnecessary travel, and work from home during the state of emergency, it has proved effective only during the first emergency in April-May 2020. Since then, the government has tried different approaches. Last fall, for example, it actually encouraged people to travel by offering subsidies to stimulate the tourism industry. But, following a big surge of infections toward the end of 2020, a second state of emergency was imposed from Jan 8 until March 21, which was soon followed a third from April 25 to June 20.

These stop-and-go emergency declarations indicate either a lack of will or an inability, on the part of the public, to learn from previous episodes. The Japanese experience thus stands in stark contrast with that of New York, which was regarded as a global epicenter of infections back in the spring of 2020. After maintaining an extended semi-lockdown, it was able to reopen gradually this year without backtracking.

Not surprisingly, the Japanese public has become increasingly critical of the government for its inability to forecast and control infections, and there is growing frustration with the slow pace of the country's vaccination rollout. The critics are right: the vaccination rate in Japan lags far behind most other advanced economies. As of July 11, Japan was administering doses at a rate of 48 for every 100 people, compared with 88 in France, 98 in Germany, 100 in the United States, and 119 in the United Kingdom. With television and YouTube images now showing the cheerful return to mask-free normal life in New York and other cities, many Japanese are envious.

Yet the Japanese public is divided between those demanding a cancellation of the entire Olympic-Paralympic Games and those (particularly in the restaurant business) objecting to strong restrictions on social and economic activities. Obviously, the government cannot satisfy both sides at the same time, so it has settled on the narrow middle path of holding the Games without spectators.

On the economic front, overall consumption has been dampened this year by the intermittent surges of infections in Tokyo and the stop-and-go emergency declarations. In April-June of this year, the Nikkei 225 performed worse than any other major advanced economy's stock index. Given that a weak economy is always politically damaging to the ruling party, Suga is under immense pressure to achieve a strong reopening and recovery.

But to resume the full range of economic activities, and ensure that the Games is a festive affair, new infections needed to remain low. And the only way to do that was to roll out vaccinations early and rapidly, as happened in New York. Although procurement has been accelerating, Japan was late to secure vaccines, and the Japanese authorities have now revealed that as of the end of June, the country had received only 13.7 million of an expected 40 million Moderna vaccine doses.

Whatever happens this summer, Suga will face a party leadership election in September, and then a general election before the end of the full term in October. As soon as the Olympic Games is over, Japan's political games will begin.

The author, a former Japanese deputy vice-minister of finance, is a professor at the School of International and Public Affairs at Columbia University and senior professor at the National Graduate Institute for Policy Studies in Tokyo.