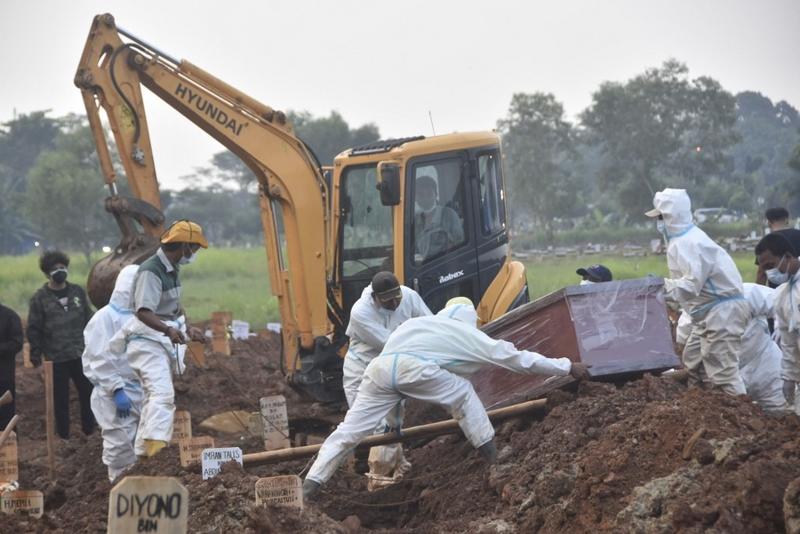 Gravediggers bury a coffin during a funeral of a COVID-19 victim at a cemetery in Bekasi on July 20, 2021. (REZAS / AFP)

Malaysia’s health ministry reported a record 199 coronavirus deaths on Wednesday, the highest daily toll since the start of the pandemic.

The ministry also reported 11,985 new coronavirus infections, bringing the total number of cases in the Southeast Asian nation to 951,884.

Indonesia has one of the world’s worst coronavirus outbreaks due to a rapid spread of the Delta variant, reporting around 1,000 deaths from the respiratory disease each day in the past week, including a new record on Wednesday of 1,383 fatalities.

The number of daily new infections has fallen in recent days, with Wednesday’s 33,772 the lowest since July 6 and a sharp drop from the 56,000 cases reported a week earlier.

However, the sprawling archipelago country of 270 million people has also been conducting fewer tests, which authorities said was due to labs being closed in the days around Tuesday’s Muslim Eid al-Adha festival.

Authorities have imposed mobility restrictions since July 3 for Java and Bali islands and other cities. On Tuesday they were extended until July 25, but authorities have begun to discuss a gradual easing.

Australia's two largest states reported sharp increases in new COVID-19 cases on Wednesday, a blow to hopes that lockdown restrictions would be lifted with more than half the country's population under stay-at-home orders.

New South Wales (NSW) state, home to the country's most populous city Sydney, logged 110 new cases, up from 78 the day before, nearly four weeks into a lockdown of the city and surrounding areas to contain an outbreak of the virulent Delta variant.

Victoria state clocked 22 new cases, from nine the day before, its biggest increase since the outbreak began this month, as it nears its second week of statewide lockdown. 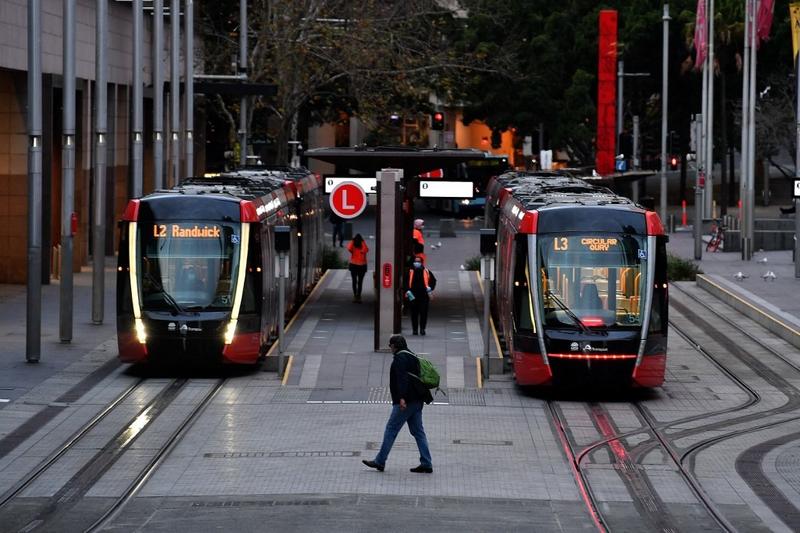 A man wearing a face mask walks towards tram station at Circular Quay in Sydney on July 19, 2021, amid a lockdown in Melbourne and Sydney as Australia seeks to contain a surge in coronavirus cases. (SAEED KHAN / AFP)

More than half of Australia's 25 million population came under hard COVID-19 lockdowns on Wednesday as the highly infectious Delta variant of the coronavirus spread across three of the country's major cities.

With South Australia state joining all of Victoria and Sydney in lockdown on Tuesday, strict stay-home orders have been enforced for large swathes of the country as officials rush to stem the worst coronavirus outbreak of the year.

Sydney, Australia's largest city, is in the fourth week of a five-week lockdown while Victoria and its capital Melbourne extended stay-home restrictions for seven days until early next week. South Australia announced week-long tough curbs on Tuesday as cases spread across its capital Adelaide.

Australia has been battling the fast-moving Delta strain, first detected in a limousine driver who transported overseas airline crew in Sydney over a month ago.

Although cases have eased over the last three days in Sydney, authorities were still finding a growing number of unlinked cases potentially jeopardising the city's July 30 reopening plans.

Cambodia on Wednesday registered 812 new COVID-19 infections including 279 imported cases, bringing the national total caseload to 69,608, the Ministry of Health (MoH) said in a statement.

Nineteen more fatalities were recorded, taking the overall death toll to 1,168, the ministry said, adding that 740 other patients recovered, raising the total number of recoveries to 61,779.

Fiji's Health Ministry confirmed on Tuesday that 1,054 new cases of COVID-19 were reported in the country in the last 24 hours.

The Ministry also reported 12 new deaths from the pandemic between July 13 and July 19. 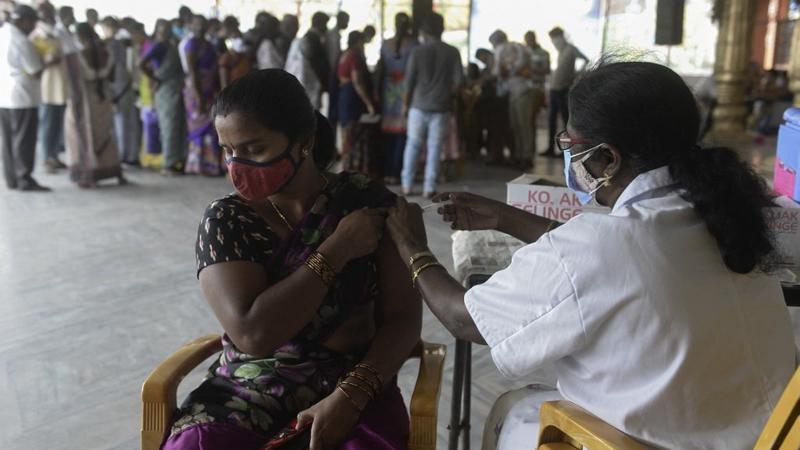 A health worker inoculates a woman with a dose of the Covishield vaccine against COVID-19 during a vaccination drive at an Hindu temple on the outskirts of in Hyderabad on July 15, 2021. (NOAH SEELAM / AFP)

India reported its highest death toll in a month on Wednesday - at nearly 4,000 - after its richest state reconciled its death count with 3,509 previously unreported fatalities, the health ministry said.

Maharashtra, home to the financial capital of Mumbai, has reported 130,753 of the country's 418,480 coronavirus deaths, and added 3,509 earlier deaths to its tally, the federal health ministry said on Wednesday.

The ministry did not give a reason but authorities have in the past attributed other instances of deaths going unreported to administrative errors, before the mistakes are discovered and the numbers appear in official data.

The sudden appearance of previously unrecorded deaths has lent weight to suspicion that India's overall death tally is significantly more than the official figure.  .

India's tally of infections stands at 31.22 million, with a death toll of 418,480, according to official data.

The country also posted its highest daily death toll in two months, at 250. The latest figures bring Iran’s total infections to more than 3.5 million and its fatalities to 87,624. About 2% of the population has been fully vaccinated, according to Health Ministry data.

The number of active COVID-19 cases in Israel increased to 8,374, the highest since March 30, the ministry said.

The death toll from the virus in Israel rose by two to 6,452, while the number of patients in serious condition decreased from 60 to 59, it said. 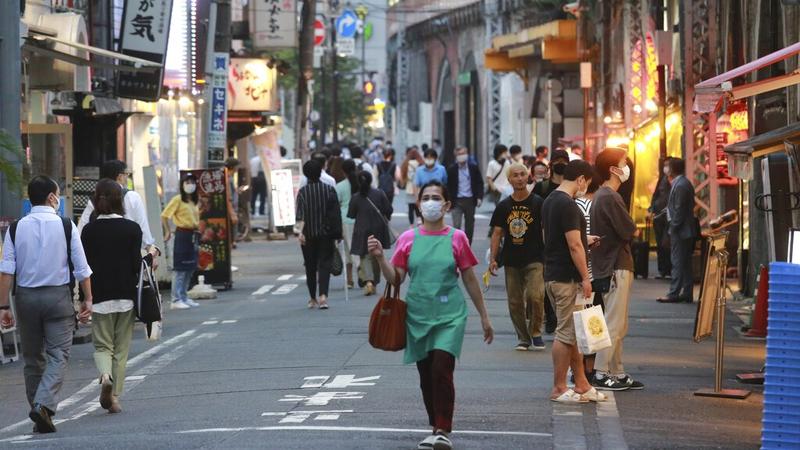 People wearing face masks to help protect against the spread of the coronavirus walk along a street during a state of emergency in Tokyo, Japan, July 12, 2021. (KOJI SASAHARA / AP)

Japan’s top COVID-19 adviser, Shigeru Omi, said in a TV program on Tuesday that Tokyo’s daily coronavirus cases could hit a new record in the first week of August, potentially reaching a figure close to 3,000.

Omi, the head of the government’s COVID-19 advisory panel, said if the current speed of infections continues, the daily caseload could double in two weeks from current levels.

The death toll from the virus went up by one to 7,887, the ministry said.

Mongolia's COVID-19 tally rose to 151,230 after 1,497 new cases were reported over the past 24 hours, its health ministry said on Wednesday.

Of the latest confirmed cases, 18 were imported cases, and the rest were local infections, the ministry said in a statement.

Myanmar's Ministry of Health and Sports imposed on Tuesday a stay-at-home order in 12 more townships as the number of COVID-19 infections kept increasing in the country.

The ministry has imposed the stay-at-home order in 86 townships in total after 12 townships in Magway region and Kachin state were newly added to the list.

According to the ministry's release, 5,860 new COVID-19 positive cases were reported with 286 deaths in the past 24 hours.

The Royal New Zealand College of General Practitioners is calling on the government to ensure New Zealand can produce and develop COVID-19 vaccines independently.

"While New Zealand has secured access to the current COVID-19 vaccine, evidence shows that the virus does mutate and is likely to require regular booster vaccinations, much like the flu-jab," Medical Director of the College Dr. Bryan Betty said in a statement issued by the college.

"We cannot allow ourselves to be jostled around and forgotten in an international scramble for access to future vaccines."

The institute said the ability to produce and develop vaccines in New Zealand must be an urgent consideration for the government and decision-makers. While the government has made some investments in domestic vaccine development during the COVID-19 pandemic, there needs to be a continued and long-term focus on resources and support.

New Zealand's continued success in combating the virus will likely be dependent on future vaccines as new mutations of the virus emerge, it said.

Pakistani President Arif Alvi on Wednesday urged the nation to follow guidelines identified by the government to prevent and control COVID-19 during the celebrations of the Eid al-Adha festival.

People should maintain social distance, wear masks and wash hands to stop the spread of the disease during the festival being celebrated across the country from Wednesday to Friday, a statement issued by the President House said.

The country is facing challenges in its fight against COVID-19 as the positivity rate in some areas of the southern Sindh province has passed 20 percent recently and the country is witnessing increasing daily new cases, according to officials and the National Command and Operation Center (NCOC).

Amid rising cases of the Delta variant of the virus, the country confirmed 2,579 new COVID-19 infections over the past 24 hours, raising the total tally to 996,451, the NCOC, the department leading Pakistan's campaign against the pandemic, said on Wednesday.

A total of 22,888 people died of the disease nationwide, including 40 patients who died over the last 24 hours, the NCOC said, adding that 2,590 are in critical condition. 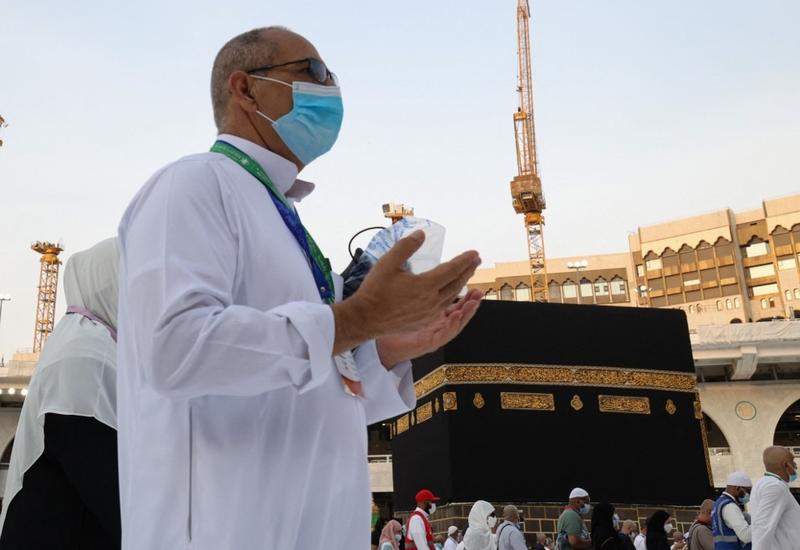 Saudi Arabia announced on Tuesday that it has extended the resident permits and exit/re-entry visas for the stranded foreigners in countries under the Saudi entry ban due to the COVID-19 pandemic.

The foreigners with Saudi resident permits or visas are also banned from entering the kingdom if they are currently in the nine countries.

To help those foreigners, the Saudi authority made the decision to automatically extend the validity of their resident permits or visas to August 31, free of charge, the General Directorate of Passports said in a statement.

Singapore's Ministry of Health (MOH) reported 195 new COVID-19 cases on Tuesday, bringing the total tally in the country to 63,440.

The new infections included 182 locally transmitted cases, of which 142 were linked to the Jurong Fishery Port cluster and 14 belonged to the karaoke cluster.

South Korea reported a record 1,784 new cases in the past 24 hours, up from 1,278 the previous day, according to the Korea Disease Control and Prevention Agency’s website.

There were 1,726 local infections, with 599 new cases in Seoul and 450 in Gyeonggi province. About 32 percent of the population, or 16.4 million people, have received at least one vaccine dose, while 13 percent are completely vaccinated.

Sri Lanka has received over 10 million COVID-19 vaccines so far, State Minister of Production, Supply and Regulation of Pharmaceuticals Channa Jayasumana was quoted by local media as saying on Wednesday.

"Among the total number of vaccines, over 3.3 million were received as donations while the government had to procure over 6.8 million of them," Jayasumana said.

According to the latest data by the Epidemiology Unit, the total number of vaccinated people in Sri Lanka has surpassed 7 million people.

Researchers from one of Sri Lanka's leading universities, the Sri Jayewardenepura University, have found that China's Sinopharm COVID-19 vaccine is highly efficient against the Delta variant which has become the dominant variant across the world.

"This vaccine was found very effective for the Delta variant as well. The antibody responses to delta variant and neutralizing antibodies were similar to levels seen following natural infection," the University said on its website on Monday.

According to the study, 95 percent of individuals who received two doses of the Sinopharm vaccine have developed antibodies similar to a naturally infected COVID-19 person.

The study showed that two doses of Sinopharm vaccine produced neutralizing antibodies in 81.25 percent of recipients and that these antibody levels were similar to what would occur after surviving a natural infection of COVID-19.

The new infections take the nation’s cumulative cases to 439,477, according to the Center for COVID-19 Situation Administration. The country reported 108 fatalities and 8,248 recoveries.

The Philippines' Department of Health (DOH) reported on Wednesday 6,560 new COVID-19 infections, bringing the total number of confirmed cases in the Southeast Asian country to 1,524,449.

The death toll climbed to 26,874 after 32 more patients died from the viral disease, the DOH said.

Turkey's daily coronavirus cases rose to 8,780 on Tuesday, nearly double a low water mark touched earlier this month, while 46 new related deaths were logged, according to the government tally.

Infections remain well down from a wave in April-May when new COVID-19 cases peaked above 60,000. They fell to 4,418 on July 4 in the wake of a stringent lockdown that ended in mid-May.

The government lifted most of the last restrictions this month. 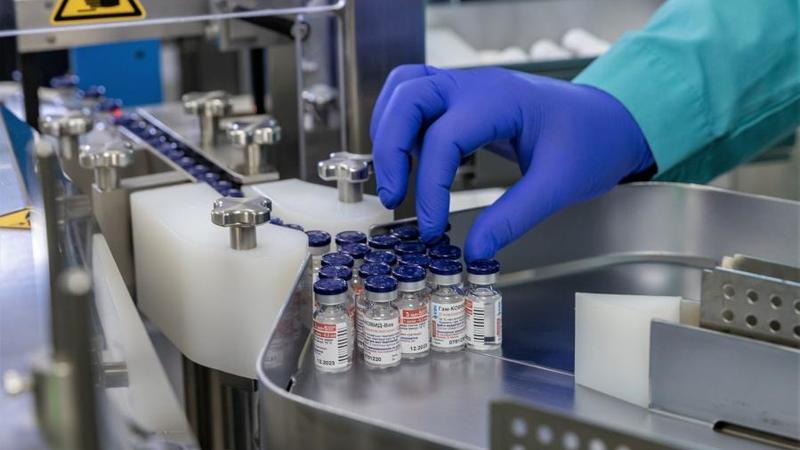 This photo taken on Dec 22, 2020 shows the production line of the Russian Sputnik V COVID-19 vaccine at a pharmaceutical plant in the Karaganda Region of Kazakhstan. (KALIZHAN OSPANOV / XINHUA)

The first validation samples taken from the produced batch will be shipped to the Gamaleya Center in Russia for quality control checks, the fund and the company said in a joint statement.