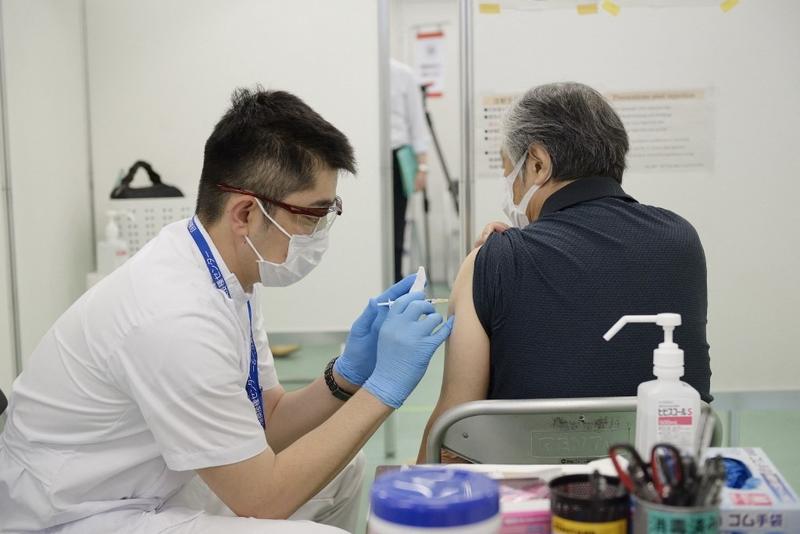 A medical worker administers a dose of a vaccine at a mass vaccination site in Tokyo on June 9, 2021. (DAVID MAREUIL / POOL / AFP)

SEOUL / ANKARA / COLOMBO – The Japanese government is considering easing the COVID-19 restrictions in Tokyo and Osaka from June 21, a government official said Friday.

Tokyo and Osaka are likely to be kept under a quasi-state of emergency with less tough measures to be implemented, and the state of emergency for most of the 10 prefectures covered will be lifted on the planned end date of June 20, the official said.

The government aims to prevent a resurgence of the COVID-19 pandemic ahead of the Tokyo Olympics slated to start on July 23.

In areas to be put under a quasi-state of emergency, the government plans to continue asking restaurants to shorten their opening hours but is considering lifting the ban on sales of alcoholic beverages.

A formal decision is expected to be made at a government meeting to be held as early as Thursday, after Japanese Prime Minister Yoshihide Suga meets relevant ministers and a subcommittee of experts to discuss restrictions on major events to be held in July and August.

Australia's Victoria state reported zero locally acquired cases of COVID-19 for the first time in nearly three weeks on Friday as state capital Melbourne came out of a snap two-week lockdown after an outbreak that has seen about 90 cases since May 24.

Melbourne exited the lockdown on Thursday night but some restrictions on travel and gathering will remain, including a rule that would force the city's five million residents to stay within 25 km of their homes.

Neighbouring New South Wales (NSW) state and Queensland, meanwhile, are on virus alert after an infected woman and her husband travelled from Victoria through several country towns in both states. read more

The 44-year-old woman tested positive for COVID-19 after reaching Queensland state and later passed the virus to her husband.

Australia's top union boss has called for the federal government to fund paid leave for workers who get coronavirus vaccines.

Sally McManus, the secretary of the Australian Council of Trade Unions (ACTU), on Thursday wrote to Prime Minister Scott Morrison advocating for up to four days' vaccination leave for all workers in the aged and disability care sectors.

She said about 40 percent of vaccine recipients had experienced side effects, and the two-day for each dose would support workers as they recover. 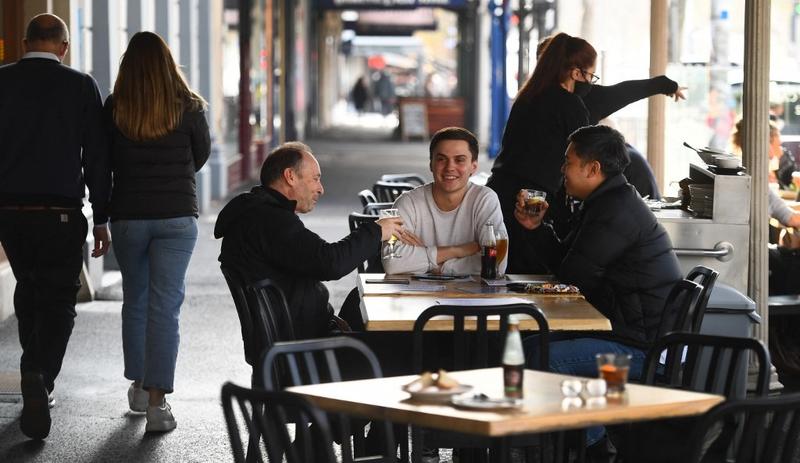 People dine out in Melbourne's Lygon Street cafe and restaurant strip on June 11, 2021, as the city eases restrictions after a two-week lockdown following a surge in COVID-19 figures. (PHOTO / AFP)

Thailand has signed a purchase order for 20 million doses of the COVID-19 vaccine develop by Pfizer and BioNTech to be delivered before the end of this year, its health minister said.

Details of the deal, delivery timeframe and the vaccine's approval by the Food and Drug Administration would be worked out in about a month, Thai Health Minister Anutin Charnvirakul said on Thursday.

Thailand is racing to secure vaccines for its mass immunisation campaign that started on Monday, two months after it was hit by its biggest coronavirus outbreak so far, driven by highly contagious variants.

The programme had relied heavily on its reserved 61 million doses of locally-made AstraZeneca (AZN.L) vaccines, but the government has tried to diversify its sources to meet its target of acquiring 100 million doses by year-end.

About 4.1 million of Thailand's more than 66 million people have so far received a first dose of a COVID-19 vaccine.

India’s government is considering expanding Covid-related relief policies to further industries, the Economic Times reported, citing unidentified people. The move could include expanding a credit guarantee program and extending tax relief for construction, as well as more spending for rural programs. The number of new Covid cases in the country was 91,702.

This was the fourth consecutive day when less than 100,000 cases were registered across the country, after peaking to over 400,000 for several days in April-May which was dubbed as the pandemic's second wave.

Mongolia on Friday reported a record daily count of 1,622 COVID-19 cases, taking the national tally to 72,104, said the health ministry.

The nationwide death toll rose to 356 after eight new fatalities were reported in the past day, said the ministry.

More than 1,621,000 Mongolians have so far been fully vaccinated since the Asian country launched a national vaccination campaign in late February to inoculate at least 60 percent of its total population of 3.3 million, it said.

Fully vaccinated people over 65 years old are allowed to go out and travel to nearby areas as part of the government’s easing of strict quarantine rules on the elderly that have been in place for more than a year. Gyms and museums can also reopen at limited capacity. In addition, the government is considering allowing businesses to accommodate more customers by the middle of the month to help boost the economy as coronavirus cases subside.

South Korea on Friday decided to extend its tight quarantine measures for three more weeks amid the continued COVID-19 pandemic, especially in the Seoul metropolitan area.

Under the country's five-tier social-distancing guidelines, the third-highest Level 2 will be kept in place until July 4 in the capital Seoul and its surrounding Gyeonggi province, with the Level 1.5 to be placed in other areas, according to the health authorities.

The ban on any gathering of five or more people will be maintained across the country for three more weeks.

The tough social-distancing rules were extended seven times since Feb 15 amid lingering worry about small cluster infections especially in the capital area.

In the latest tally, South Korea reported 556 more cases of COVID-19 for the past 24 hours, raising the total number of infections to 146,859. The daily average caseload for the past week was 573.

Of the new cases, 201 were Seoul residents and 172 were people residing in Gyeonggi province.

South Korea reported 556 more cases of COVID-19 as of midnight Thursday compared to 24 hours ago, raising the total number of infections to 146,859.

The daily caseload was down from 611 in the prior day, falling below 600 in three days. The daily average caseload for the past week was 573.

Turkey will start on Friday to vaccinate the catering sector, along with the barbers and hairdressers, against the COVID-19 as part of its ongoing nationwide vaccination campaign, Turkey's Health Minister Fahrettin Koca said Thursday.

"The food production, distribution sector and cafe, restaurant employees will also be included in the program as of tomorrow. As part of the vaccination program, barbers and hairdressers are also to be vaccinated," Koca tweeted.

Turkey launched its nationwide vaccination on Jan. 14 with the Chinese Sinovac COVID-19 vaccine and recently the Pfizer-BioNTech jabs. More than 18,736,000 people have been vaccinated so far.

Turkey on Thursday reported 6,408 new COVID-19 cases, including 563 symptomatic patients, raising the total number of cases in the country to 5,313,098.

Myanmar reported 161 new COVID-19 cases on Thursday, bringing the total cases in the country to 144,876, according to a release from the Ministry of Health and Sports.

Four more deaths were reported on Thursday, taking the death toll to 3,237 in the country, the release said.

According to the ministry's figures, a total of 132,690 patients have been discharged from the hospitals and over 2.63 million samples have been tested for COVID-19 so far, including 2,347 samples tested on Thursday. 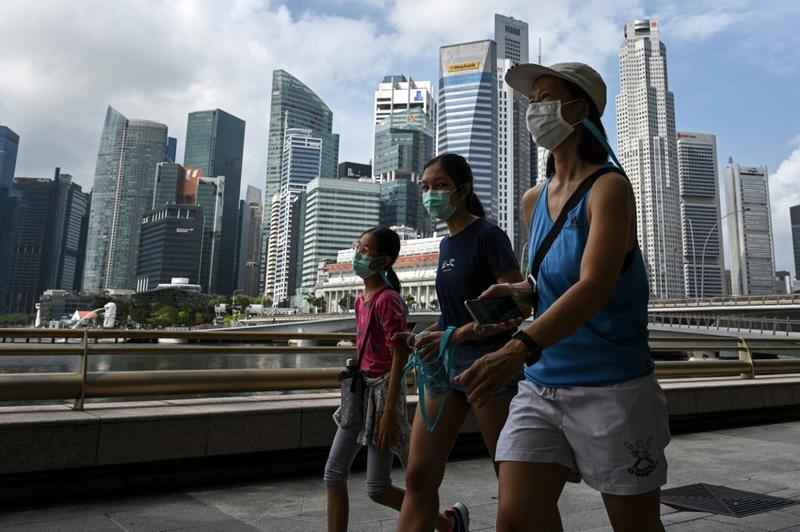 A planned quarantine-free travel corridor between Australia and Singapore may take months to open because of delays to Australia’s COVID-19 vaccination program.

The two countries are “putting systems in place that will enable such a bubble to emerge between Singapore and Australia as it does now occur between Australia and New Zealand,” Australia Prime Minister Scott Morrison said at a joint virtual press conference after meeting Singapore Prime Minister Lee Hsien Loong on Thursday. He cautioned that any corridor is still some time away.

Such a bubble hinges on vaccination rates, Lee told reporters. “Once the majority of the population is vaccinated, it becomes much easier for us to contemplate these openings up,” he said.

That means an operational air-travel corridor could be months away, at least. Only about 5.5 million out of 26 million Australians have had at least one jab, meaning some border restrictions are likely to remain well into next year. Morrison’s government has abandoned its original October target to inoculate the population.

Singapore and Australia are among a handful of Asia-Pacific countries that have managed to contain the coronavirus and have been reluctant to ease border restrictions. Australia has largely closed its shores to non-citizens and residents since last year, while Singapore doesn’t allow most short-term visitors to enter, except for those under programs such as a green lane for business travelers.

Singapore will start a phased easing of its COVID-19 restrictions from next week, including allowing up to five people to gather from two currently, after a fall in the number of new infections, the health ministry said.

The city-state had reimposed curbs on gatherings and public activities last month amid a rise in locally acquired infections and with new clusters forming.

Larger gatherings will be allowed from Monday, while restaurants will be able to resume dine-in services from June 21 if infections remain under control, the ministry said.

Singapore regulators had also approved four coronavirus self-testing kits for sale to the public, it said.

Lao Ministry of Health on Friday urged people to stay vigilant against COVID-19, although the number of new COVID-19 cases in the country continues to fall.

Deputy Director General of the Department of Communicable Disease Control under the Ministry of Health Sisavath Southaniraxay told a press conference in capital Vientiane that Laos is still placed at a high risk for a major outbreak, because a large number of new cases are being reported in neighboring countries, especially in Thailand.

The Philippines' Department of Health (DOH) reported on Friday 6,686 new COVID-19 infections, bringing the total number of confirmed cases in the Southeast Asian country to 1,300,349.

The death toll climbed to 22,507 after 196 more patients died from the viral disease, the DOH said.

The Philippines, which has more than 110 million population, has tested more than 13 million people since the outbreak in January 2020.

Health Undersecretary Maria Rosario Vergeire said the number of coronavirus cases spiked in the past weeks.

The NCOC said in a statement that the country's number of overall cases had risen to 938,737, including 873,543 recoveries.

There are 43,618 active cases are under treatment across the country, including 2,841 being in critical condition.

According to the NCOC, the pandemic killed 47 people during the last 24 hours, increasing the death toll to 21,576.

The first phase of the lockdown, which was due to end on June 14, will continue until June 28, the minister said in a statement on Friday. The decision to extend was made as daily infections still exceeded 5,000 daily, he said.

Malaysia returned to a hard lockdown this month after new cases exceeded a record 9,000 by end-May, straining the resources of the nation’s hospitals. Only essential sectors can operate under the renewed restrictions, while movement has been restricted to a 10-kilometer radius.

The nation’s infection rate has fallen since the measures took effect on June 1, remaining below 1.0 as of Thursday, official data show. Still, cases remain above the 4,000 daily threshold set by the government to end the lockdown, Health Minister Adam Baba said Tuesday. The country reported 6,849 new infections on Friday.

Director of the Allergy, Immunity and Cell Biology Unit at Sri Lanka's Sri Jayewardenepura University, Chandima Jeewandara said other variants have also been reported in the country.

Sri Lanka is presently facing a third wave of the virus with 216,134 patients recorded to date, and the death toll stood at 2,011, official statistics showed.