CSRC chairman: No changes in IPO approval process in China

By Shi Jing in Shanghai 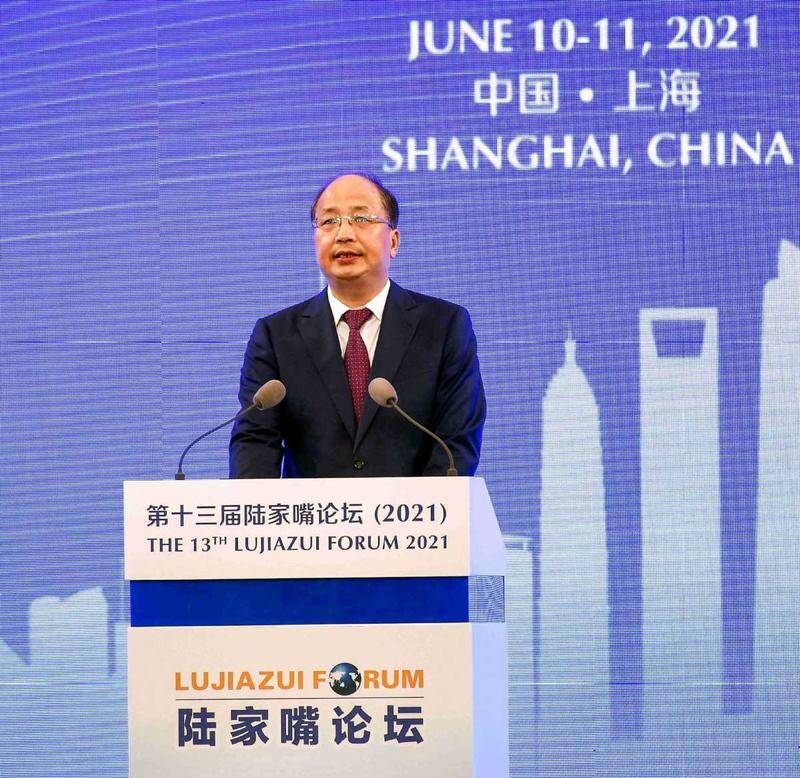 Yi Huiman, chairman of the China Securities Regulatory Commission, delivers a speech at the 13th Lujiazui Forum in Shanghai on June 10, 2021. (CHEN MENGZE / FOR CHINA DAILY)

China has neither tightened nor relaxed the approval process for initial public offerings, but is focused more on aspects like market capacity, liquidity and coordinated development of the primary and secondary markets, a top regulatory official said.

Speaking at the 13th Lujiazui Forum in Shanghai on Thursday, Yi Huiman, chairman of the China Securities Regulatory Commission, allayed fears that the regulator was tightening its grip on public floats in the country. The country's IPO process has been further streamlined in a more scientific and reasonable manner, aiming to create an ecosystem in line with market expectations, said Yi.

Public data from market tracker Wind Info showed that the total IPO financing in the A-share market crossed 151.2 billion yuan (US$23.7 billion) in the first five months of this year, which is the highest since 2011.

The IPO process in China has been further streamlined in a more scientific and reasonable manner, aiming to create an ecosystem in line with market expectations, Yi Huiman, chairman of the China Securities Regulatory Commission, said

According to the new Securities Law, which took effect in March 2020, intermediary organizations now shoulder more responsibilities, said Yi. According to the proposed rules released by the CSRC in April, IPO sponsors will be interviewed by the top securities regulator on the due diligence process of a new issue.

The State Council released a guideline last October to further improve the quality of listed companies. The CSRC announced in mid-April the revision of evaluation measures for listed technology companies, which is also aimed at enhancing the quality of companies on the STAR Market.

Shareholders' responsibility regarding information disclosure has also been further stressed. As more emphasis is laid on "hard technology", companies planning to go public on the technology-focused STAR Market in Shanghai will undergo a more solid and comprehensive evaluation, said Yi.

In the first five months of the year, 67 companies made their debut on the STAR Market and another 66 successfully listed on the ChiNext, raising 55.4 billion yuan and 44.7 billion yuan, respectively, according to public information.

Dick Kay, leader of Deloitte China National Public Offering Group, said the benefits of the pilot registration-based IPO mechanism, which was first experimented at the STAR Market in July 2019 and promoted to ChiNext last August, are increasingly noticeable. The two technology-heavy boards will be the major drivers of the A-share market this year, he said.

Deloitte estimates that there will be 150 to 180 IPOs at the STAR Market this year, and another 140 to 170 IPOs on the ChiNext.

China's top financial regulators have always been open as to companies' listing venues, said Yi. It is normal that some companies want to go public overseas while others are looking to come back after an overseas stock market debut.

"We hold a supportive attitude in general. But it should be noted that companies should abide by the local laws no matter where they are listed. Regulators all over the world should strengthen their cooperation regarding law enforcement," he said.

"The relationship between openness and security should be properly addressed. The prerequisite of a company's successful listing in an overseas market is to conform to domestic laws and supervision."