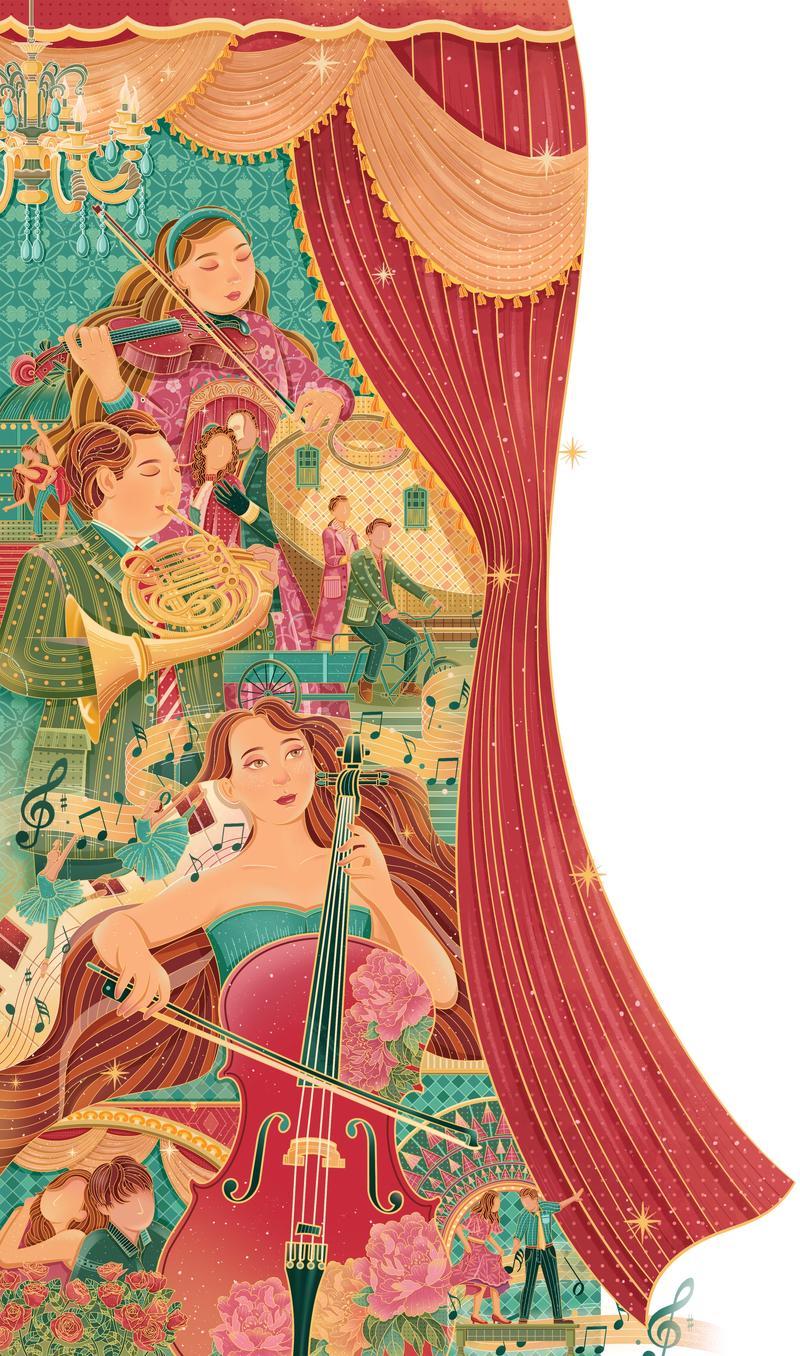 Zhao Fanjia took his seat in a Beijing theater in 2015 to watch the musical Ghost, adapted from the movie of the same title.

The young student from the high school affiliated to the Beijing Dance Academy was greatly impressed by leading actors Liam Doyle and Lucy Jones in the roles of Sam and Molly.

“I was intrigued by the musical in many ways, including the songs, the dances and stage set,” Zhao said. “It was the first time I had watched a musical in a theater, and after the show I decided to become an actor in such productions.”

Zhao, 22, who is majoring in musical performance at the Central Academy of Drama, is being trained to sing, act and dance.

In 2019, he landed his first role, appearing in the Chinese musical Lethe. Due to the coronavirus pandemic, the show’s premiere had to be postponed, with rehearsals starting late last year.

On April 24, Lethe finally opened in the Chinese capital, where it was performed five times at the Beijing Comedy Theatre.

Directed by Huang Kai, a teacher in the music department of the Beijing Dance Academy, the production is inspired by Chinese folk tales and centers on people on the border of life and death. The creative team also included scriptwriter Yang Xinyan and composer and music director Wei Shiquan.

Zhao played the role of Atai, a young man who works hard but fails to gain recognition from those around him. Disappointed and sad, he decides to kill himself after expressing his sorrow.

“I’d been waiting for that moment for a very long time and I was extremely nervous. My heart was racing and my hands turned ice cold before I went onstage for the first show,” Zhao said.

“I tried to focus on my performance, and it felt so good afterward. I cannot wait to perform in the production again.”

With the pandemic under control in China, and theaters and cinemas gradually returning to full seating capacity, live shows, including musicals — one of the most popular art forms among young Chinese theatergoers — are enjoying a comeback.

Cai Peng, who has 17 years’ experience as an actor in musicals, is involved in rehearsals for a new Chinese production titled 2514: A Space Musical, which includes songs written by Wang Luobin (1913-96) that feature elements of space and science fiction.

Composed by songwriter Peter Kam and written and directed by Zhuang Yi, the production was staged in Beijing from May 20 to 30.

Cai, 38, said, “I’ve witnessed the growing popularity of musicals among Chinese audiences during the past two decades and we are excited to welcome the return of live theater.”

He first performed in a musical in 2004, playing roles in Snow Wolf Lake, a hit show led by Cantopop icon Jacky Cheung. Premiered in Hong Kong in 1997, the Mandarin version of the production was launched in 2004, touring China with more than 100 shows.

Cai, who at the time was studying music at Capital Normal University in Beijing, went to the audition for the production with a friend, a student in the acting department at the Central Academy of Drama.

“Neither of us knew about musicals and we had no idea why singing and dancing were part of the audition,” Cai said. He originally had no intention of taking the audition, but was encouraged to give it a try by Cheung’s manager, Florence Chan.

Cai performed different minor roles in the production and toured with the team for about a year.

The experience allowed him to learn about musicals, and he has since performed in more than 20 productions, including Song of Light & Shadow directed by Tian Qinxin, which premiered in 2005, marking the centenary of the birth of Chinese movies. He has also appeared in Born to be a Hero, a 2012 production adapted from the eponymous martial arts novel by Louis Cha, who writes under the pen name Jin Yong.

Early this year, Cai performed in the Chinese version of the Broadway musical Next to Normal, which opened in New York in 2009 and was nominated for 11 Tony Awards that year. In 2010, it became the eighth musical ever to receive the Pulitzer Prize for Drama.

“It was the first time I had performed in a musical adapted from a Broadway show. Before that, all the musicals I appeared in were Chinese,” Cai said. 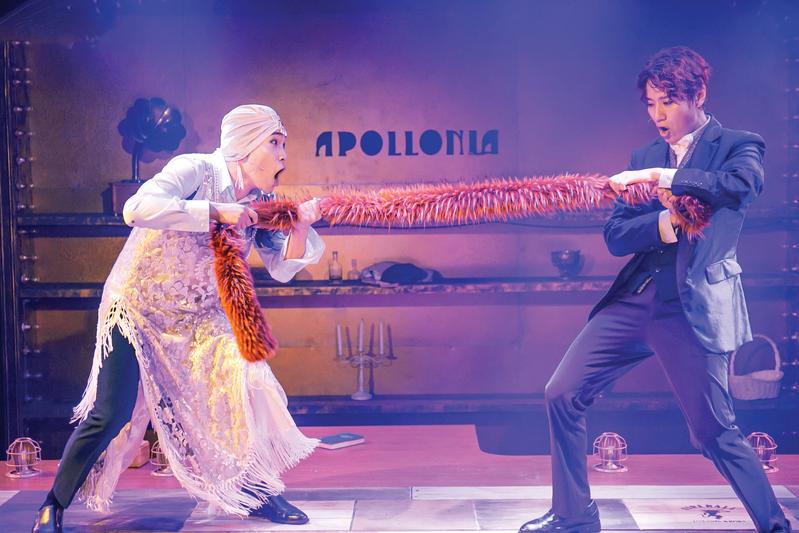 Scenes from Apolonia, which premiered in Shanghai on Aug 28. The musical, directed by Gao Ruijia, has been staged more than 300 times. Set against the backdrop of a bar, it offers audiences an immersive theater experience. (PHOTO PROVIDED TO CHINA DAILY)

From the end of 2014 to summer 2016, Cai stayed in Shanghai, appearing more than 300 times in the production Shanghai Bund. After returning to Beijing, he started to train for musicals at Peking University, which enabled him to study the Western art form.

“I never planned to act in musicals. My childhood dream was to be an athlete, but looking back, performing in such productions is the best job for me. We take the stage to fulfill a dream, not to earn a large paycheck,” Cai said.

He added that unlike 20 years ago, musicals now attract young audiences. Thanks to the popular reality show Super-Vocal, produced by Hunan Satellite TV and which premiered in 2017, performances by classically trained young Chinese singers successfully introduced Western opera and contemporary musicals to a wider audience in China.

Singers such as Zheng Yunlong, Liu Yan and Ayanga have become household names, building a loyal following among Chinese fans.

Huang Kai, who teaches students majoring in music at the Beijing Dance Academy, said: “It takes time for people to appreciate this art form, which used to be alien to China. However, I now feel we are enjoying a great period in nurturing our own talent, as actors for musicals have risen significantly in terms of status and popularity.”

Huang majored in directing at the Central Academy of Drama in Beijing, where he obtained his Bachelor of Arts in 2004 and Master of Arts in 2009. The institution launched a musical performance department in 1992, which gave Huang the opportunity to watch rehearsals and performances on campus.

“Unlike plays, which tell stories through conversations and monologues, musicals tell stories and portray roles through music. When I was a university student, the idea behind musicals was unclear, but I was intrigued by the art form,” said Huang, who later became a musical director.

“The musicals industry in China is still very young. What I want to see is a real musical with Chinese characteristics,” he said.

With more Chinese musicals emerging, one of the biggest challenges in producing original domestic productions is the dearth of professional talent. Huang said there are not many Chinese actors who have equally strong singing and dancing skills required for musicals.

Leading institutions such as the Beijing Dance Academy, Central Academy of Drama, Shanghai Conservatory of Music, and Shanghai Theater Academy offer majors in musical theater — mostly training actors. However, there is a lack of instruction in other key areas, such as for musical directors, scriptwriters, lyricists and composers.

To meet this need, a new project to train writers for musicals, titled Fly Plan, has been launched by Theatre Rocks — a new venture by Mailive, the theater brand of Alibaba’s online ticketing platform Damai — and Shanghai Grand Theater.

From March 30 to May 31, the project was open to applicants in three categories — scriptwriting, lyricism and composing. From July to September, applicants selected for the project will receive training from veteran writers from home and abroad, including the team from New Musical Inc, a nonprofit organization headquartered in Los Angeles, which has offered classes and workshops for writers, lyricists and composers of musicals for decades.

Fewer than 15 applicants and five or six works will be selected to enter the final stage of the project.

Li Jing, director and producer for Theatre Rocks, said, “During the past two decades, over 70 percent of the musicals staged in China have either been international tours or Chinese adaptations of Western shows, with original Chinese productions taking up less than 30 percent.

“It’s a good time to launch the project to train Chinese talent. We want to combine the showmanship of Broadway and London’s West End with Chinese stories and characters.”

Song Yang, assistant general manager of Shanghai Grand Theatre, said the epic French musical Les Miserables was a hit when it premiered in the eastern metropolis in 2002. Considered a production that “tested the waters”, it was staged 22 times at the theater over the course of three weeks and was a phenomenal success.

“At the time, musicals were a foreign art form for Chinese audiences, but after the premiere, the remaining shows sold out fast,” Song said, adding that more Western musicals staged in Shanghai, including Cats, The Lion King and Mamma Mia!, have since been well-received.

Mandarin adaptations of classic Broadway musicals such as Mamma Mia!, Jekyll & Hyde and Murder Ballad have also been a hit with Chinese audiences.

In 2015, when the Tianqiao Performing Arts Center was launched in downtown Beijing, The Phantom of the Opera, the Andrew Lloyd Webber musical, was staged 64 times as the opening production at the venue. Total ticket revenue reached about 70 million yuan (US$10.89 million), with an attendance rate of about 95 percent.

Due to the pandemic, the performing arts market has been heavily affected, with live shows canceled and venues closed temporarily. With international theatrical productions still halted, original Chinese presentations have the opportunity to gain audience recognition.

Li said, “From the statistics, we can see there is varied demand among Chinese audiences for theatrical productions.

“The internet has allowed Chinese audiences to get to know a range of art forms, and young Chinese, especially those who travel overseas to watch shows, are very open-minded and informative. It’s a good time for us to train our own musical talent.”