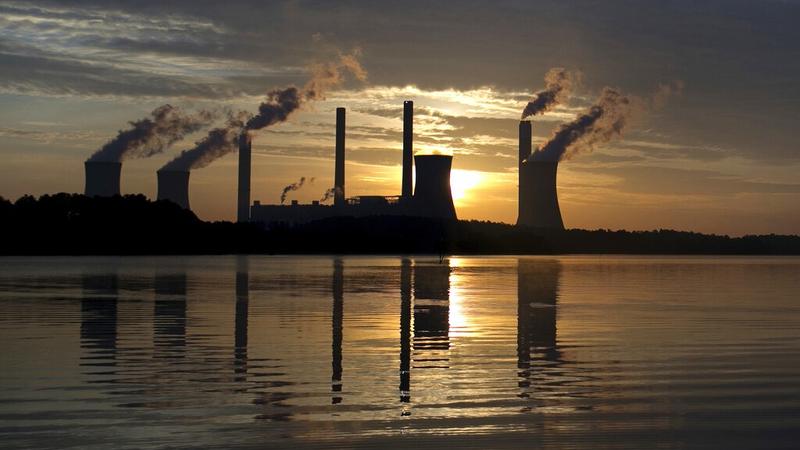 In this June, 3, 2017 file photo, the sun sets behind Georgia Power's coal-fired Plant Scherer, one of the US' top carbon dioxide emitters, in Juliette, Georgia. (BRANDEN CAMP / AP)

The deeper greenhouse gas emission cuts promised by US President Joe Biden and other global leaders since last September have slightly improved the outlook for global warming.

The world is on track by the end of this century to warm by 2.4 degrees Celsius above pre-industrial times, nonprofit Climate Action Tracker said in its May report. That’s an improvement from the group’s previous forecast of 2.6 degrees Celsius, but still well above the 1.5 degrees Celsius of warming that countries agreed to strive for when they signed the Paris Agreement in 2015.

Scientists have warned that the Earth warming by more than 2 degrees Celsius would be catastrophic for humans, as well as plants and animals

“These results show that the efforts made are worthwhile and that progress is possible in international climate action,” German Environment Minister Svenja Schulze said on Tuesday as part of this week’s Petersberg Climate Dialogue. “Just a few short years ago, the world was on course toward 3.5 degrees global warming — a scenario that doesn’t bear thinking about.”

Scientists have warned that the Earth warming by more than 2 degrees Celsius would be catastrophic for humans, as well as plants and animals. Some parts of the planet would be unlivable, while extreme weather events like heatwaves, floods, storms and drought would be exacerbated. Species unable to adapt could go extinct and rising sea levels would threaten human coastal settlements, leading to forced migration.

If all countries, including top emitter US, deliver on their new climate promises, global warming could be as low as 2 degrees Celsius, according to CAT’s most optimistic scenario. So far, 131 countries covering 73 percent of global greenhouse emissions have adopted or are considering targets to zero out emissions.

CAT bases its forecast on the more detailed targets for 2030 emissions that Paris signatories need to submit to the United Nations this year. There’s still a gap between those short-term targets and what’s needed to rein in global warming, the report said.

Ambitious targets need to be supported by policies, according to the group, which estimates that the world would warm 2.9 degrees Celsius if only current measures are implemented.

ALSO READ: US should reduce emissions by half within a decade

Meanwhile, the Asian Development Bank (ADB) vowed on Tuesday to put more focus on the adaptation and resilience to climate change in response to the growing threat facing the Asia-Pacific.

Floods, droughts, cyclones, and heat stresses are already impacting livelihoods, food, and water security, and the health of millions of people, especially vulnerable populations including women and children and the poorest of the poor, Asakawa said at a webinar during ADB's 54th annual meeting.

He added that more than 60 percent of the people in the region work in sectors highly susceptible to changing weather patterns.

"We must invest more in climate adaptation. We are now dangerously close to the point where action could come too little, too late," Asakawa said.