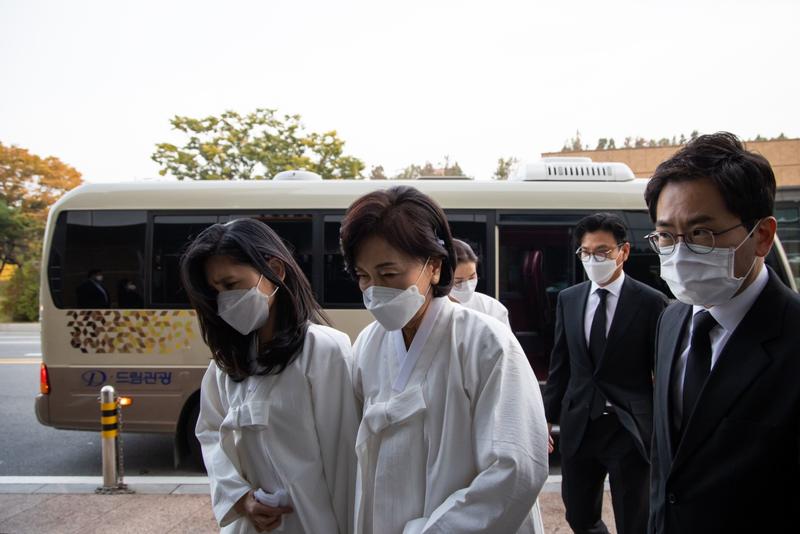 Hong Ra-hee, the wife of the late Samsung Group Chairman Lee Kun-hee, boosted her fortune to more than US$7 billion after receiving billions of dollars in stocks in the much-awaited transfer of her husband’s assets.

The drama over succession at South Korea’s largest company has roiled the country since the late Lee Kun-hee, the patriarch and longtime head of Samsung Electronics, suffered a heart attack in 2014

Hong, 75, inherited about 83 million shares in Samsung Electronics Co, making her the largest individual shareholder in the tech giant with a 2.3 percent stake, according to a filing last week. Hong is the richest woman in South Korea with a net worth of US$7.4 billion as of Monday’s stock market close, according to the Bloomberg Billionaires Index.

It’s another consequence of the massive passing of wealth after Lee’s death, which saw his son Jay Y cement control over the group after his holdings rose significantly in key affiliates. The late Lee’s only son is worth US$12.6 billion, according to the index, while his sisters Boo-jin and Seo-hyun saw their wealth swell to US$5 billion and US$4.4 billion, respectively.

“It’s a win-win situation for the family members,” said Park Ju-gun, head of Seoul-based research firm Leaders Index. “It has ensured more stable control for Jay Y Lee, while other family members get more of a voice with their increased stakes.”

A Samsung Electronics spokeswoman declined to comment on the family’s net worth.

Billionaires will transfer more than US$2 trillion within the next two decades, according to research by UBS Group AG and PwC. The families of Petr Kellner and Heinz Hermann Thiele are poised to inherit fortunes worth more than US$30 billion after the entrepreneurs died suddenly this year at ages 56 and 79, respectively. The drama over succession at South Korea’s largest company has roiled the country since the late Lee, the patriarch and longtime head of Samsung Electronics, suffered a heart attack in 2014. Jay Y Lee has been accused in two different lawsuits of illegal behavior to ensure control over the conglomerate and is currently serving a jail sentence after a conviction for bribery in the first case.

Hong received the biggest slice of the late Lee’s stake in Samsung Electronics as it was divided in a 3:2:2:2 ratio between her and her three children. Hong got about 33 percent of the shareholding, while her children each received about 22 percent, according to the legally prescribed ratio.

Stock holdings in the conglomerate’s other key affiliates, its de facto holding company Samsung C&T Corp and Samsung SDS Co, were transferred according to the same ratio.

But Jay Y was able to tighten his grip as he received half his father’s shares in Samsung Life Insurance Co, raising his stake to more than 10 percent from 0.06 percent. Samsung Life owns 8.5 percent of Samsung Electronics.

Last week, the family announced its plan to pay one of the largest inheritance-tax bills at more than 12 trillion won (US$10.7 billion), as well as its intention to donate 1 trillion won for medical facilities and about 23,000 works of art, including pieces by Pablo Picasso and Claude Monet.