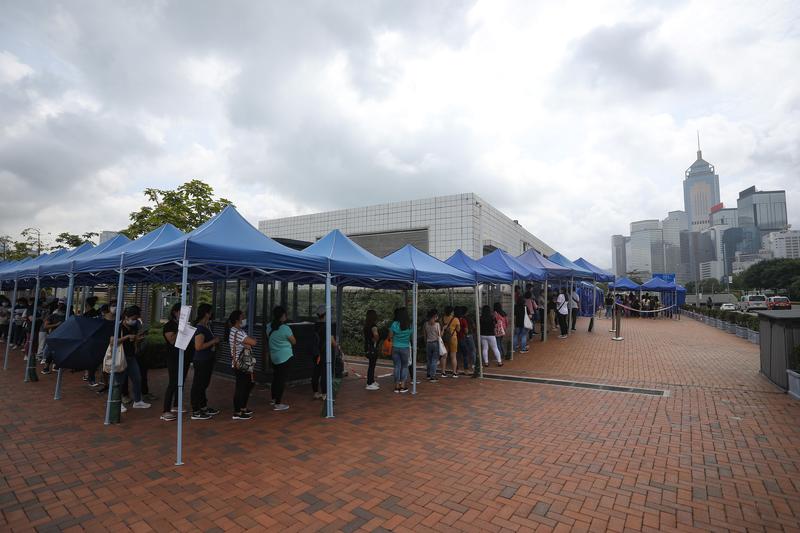 Migrant workers queue up for COVID-19 testing in the Central district of Hong Kong on May 4, 2021. (CALVIN NG / CHINA DAILY)

In a statement, the government said it set up a “restricted area” starting 7:30 pm at Block R of Allway Gardens in Tsuen Wan. A 48-year-old Filipino domestic helper who was employed there had tested positive for the mutant virus strain N501Y.

The government said it set up a “restricted area” starting 7:30 pm Tuesday at Block R, Allway Gardens, 2 On Yat Street, Tsuen Wan. A 44-year-old Filipino domestic helper employed in the building had tested positive for the mutant virus strain N501Y

“As there is a confirmed case recorded in Block R, Allway Gardens today and the preliminary test result involved a mutant strain, the risk of infection in the relevant area is assessed to be likely higher, the government decided to make a 'restriction-testing declaration' for the relevant area after the test result was found positive," a government spokesman was quoted as saying in the statement.

Residents were reminded to stay in their premises and undergo compulsory testing as government personnel set up temporary specimen collection stations.

The government added that it aimed to finish the exercise by about 7 am on Wednesday.

The Filipino's infection was discovered through the mandatory testing program targeting the city’s 370,000 foreign domestic helpers. She arrived in the city on March 31 and lived at Block R after finishing three weeks of hotel quarantine, Chuang Shuk-kwan, head of the Centre for Health Protection’s communicable disease branch, said at a briefing.

The CHP has yet to determine if her infection was local or if she already had the virus when she arrived in the city.

The other three cases on Tuesday involved two travelers from Indonesia, and a 28-year-old woman who flew from India and was also found to be infected by the N501Y variant only after she completed 21 days of hotel quarantine and returned to her residence in Tsim Sha Tsui, Chuang said.

Those who lived with the woman at Beauty Mansion were evacuated on Monday night for 21 days of quarantine.

According to Chuang, there were fewer than 10 preliminary cases, including at least three local infections.

One involved the mother of a 10-month-old girl, who was believed to have been infected by their Filipino helper. All three of them had the N501Y strain. The Filipino’s infection triggered the citywide testing for helpers.

The other two local preliminary cases involved Filipino helpers who knew each other. They were also identified through the mandatory testing for helpers, Chuang said.

One lived at Kornhill in Quarry Bay while the other stayed at Royalton in Pok Fu Lam.

Meanwhile, the Expert Committee on Clinical Events Assessment Following COVID-19 Immunisation assessed on Tuesday nine death reports involving persons who were vaccinated and concluded that their deaths were not related to the vaccine.

The cases, reported to the Department of Health between April 19 and Sunday, involved five males and four females aged 43 to 76. The committee said “all the reports did not have clinical evidence to support the events were caused by vaccine”, according to a government statement.

The committee also reviewed 16 reports of persons who developed suspected Bell's palsy symptoms after vaccination. The committee considered that three of these cases required further clinical information before the assessment could be concluded, it added.