By Jan Yumul in Hong Kong 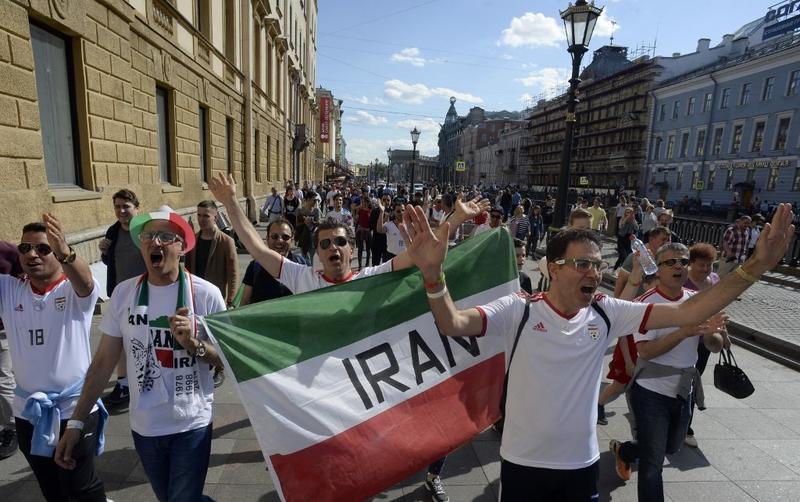 Iran's fans arrive to follow the game between Russia and Saudi Arabia on a giant screen at the Fifa Fans Fest Saint Petersburg on June 14, 2018 during the Russia 2018 football World Cup tournament. (OLGA MALTSEVA / AFP)

A possible thaw in relations between Saudi Arabia and Iran in the wake of conciliatory moves and reported talks between officials from the two sides will spur hopes for advancement of peace and stability in the Middle East region, experts said.

In a televised interview last week to mark the fifth anniversary of Saudi Arabia’s Vision 2030, a socio-economic blueprint aimed at reducing the kingdom’s dependence on oil and developing the nation’s public services, Saudi Crown Prince Mohammed Bin Salman said his country wanted to have good relations with Iran.

Iran, in turn, said it was willing to adopt a constructive dialogue and overcome their differences. Their progress was already welcomed by Qatar and Pakistan leaders.

The positive language came after media reports said earlier in April that officials from the two countries, which have a longstanding history of bitter rivalry in the volatile region, held direct talks in Iraq in a bid to patch up relations

The positive language came after media reports said earlier in April that officials from the two countries, which have a longstanding history of bitter rivalry in the volatile region, held direct talks in Iraq in a bid to patch up relations.

Umer Karim, a researcher who focuses on Saudi foreign policy at the University of Birmingham in the United Kingdom, said the latest developments suggest that the Saudi leadership is “cognizant of the new political realities within the international and regional political environment” following a change of leadership in the United States, with Joe Biden taking over the reins from Donald Trump in January.

Further, the Saudi moves also mark an acknowledgement of the Arab nation’s failure to reduce the influence of Iran in the region or the capabilities of Yemen’s Houthi rebels, he said.

“Saudi policy makers understand that in such a situation where the odds are heavily stacked against them the best approach would be to sit on table with Iran,” said Karim. This may possibly open up a new way out of the conflict in Yemen.

Meanwhile, the Iranian response “shows that they are interested in furthering the dialogue process with Saudi Arabia so they can politically legitimize some of the gains they have made over the years on the turf of larger Middle East”, the foreign policy analyst said.

For Dubai-based Patrick Cooke, Managing Editor for Middle East and Asia at research publisher Oxford Business Group, the Crown Prince’s public shift in tone toward Iran was in line with broader positive moves toward addressing points of instability in the region since the leadership change and geopolitical priorities in the US, including the restoration of trade and travel ties with Qatar and the proposal of a ceasefire in Yemen.

While entrenched differences between political leaders in Saudi Arabia and Iran remain to be addressed, Cooke said a return to diplomatic engagement should be seen as a cause of optimism that could lead to greater stability in the Middle East.

“It is encouraging to see regional powers taking responsibility for addressing challenges in the Middle East, as regional ownership of the process -- free from outside interference -- could enhance the prospects for a durable solution,” said Cooke.

The rivalry between Saudi Arabia and Iran has persisted for generations, mainly because of their religious differences as they follow different branches of Islam

Qatar and Pakistan were among those who welcomed the Crown Prince’s gesture.

Qatar Deputy Prime Minister and Minister of Foreign Affairs Sheikh Mohammed bin Abdulrahman Al Thani said that Qatar supports the Saudi Crown Prince’s call for a foreign policy based on the foundations and principles of good neighbourliness and dialogue in the region, including with Iran, Doha-based media The Peninsula Qatar reported.

Pakistan Prime Minister Imran Khan said they welcomed Saudi’s initiative for peace with Iran, adding “Iran is our neighbour” and that “Saudi (is) our closest friend”, Islamabad-based Pakistan Observer reported.

“This peace initiative will strengthen the Muslim Ummah (community),” said Khan in a tweet.

The rivalry between Saudi Arabia and Iran has persisted for generations, mainly because of their religious differences as they follow different branches of Islam.  Iran is largely Shia Muslim while Saudi Arabia sees itself as the dominant Sunni Muslim power.

As for tensions between Saudi Arabia and Yemen, they go back to 2014 when Houthi Shia rebels seized much control of the west of Yemen and a Saudi-backed coalition of Arab states launched a military operation to restore former Yemeni President Abdrabbuh Mansour Hadi's rule. Riyadh led a military coalition into Yemen the following year, but it has struggled to take out the rebels.

Saudi Arabia presented a new peace initiative in March, which included a nationwide ceasefire in Yemen and the reopening of air and sea links. However, the Houthis rejected it, saying it was not enough to lift a blockade.

Asif Shuja, senior research fellow at the Middle East Institute of the National University of Singapore, believes one of the reasons behind Saudi Arabia’s conciliatory tone toward Iran is US interlinked policies toward the Middle East.

As evidenced through the Vienna nuclear talks early last month, the US is striving to reduce its own conflict with Iran, he said.

“It is also not a coincidence that Prince Salman’s call for building bridges with the neighboring Iran coincided with the celebration of five years of achievements towards Vision 2030. The success of this Vision presupposes a peaceful regional environment, which is difficult to achieve without an improved Iran-Saudi relation,” said Shuja.

Shuja noted that Iran is currently invested in its objective of removal of US sanctions in order to rebuild its shattered economy, which he added can be possible only when the US returns to the Joint Comprehensive Plan of Action, known commonly as the Iran nuclear deal, which Biden’s predecessor, Donald Trump, withdrew from in 2018.

On the positive side, Shuja said, these developments would help expedite the nuclear negotiations so far as the Saudi opposition is concerned.

“In a manner this development is positive as all the major players are trying to engage in a dialogue with each other,” said Karim from Birmingham.

But he added that “it will be really difficult to speculate if both sides can reach a long-term political understanding that can pave for peace in the region, and specifically in ending conflict in Yemen”.