Philippines struggles to rein in virus as health system under pressure 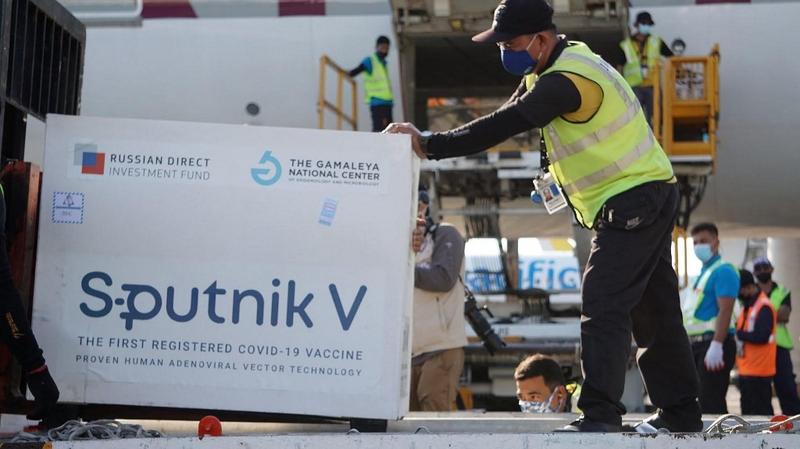 This handout photo taken on May 1, 2021 and receive from the Presidential Communications Operations Office - Office of the Global Media and Public Affairs (PCOO-OGMPA) shows workers unloading first batch of the Russian-made Sputnik V coronavirus vaccine from a plane shortly after arriving at the international airport in Manila. (PHOTO / AFP)

While Philippine president received his first Sinopharm jab, experts urge the government to improve the “fundamentals” of pandemic control – such as testing, contact tracing, quarantining and treatment while speeding up vaccination.

The country’s COVID-19 cases breached the 1 million mark on April 26 – making the Philippines the second worst-hit country in the Southeast Asian region. The huge caseload is overwhelming the public health system with the country’s hospitals overflowing with infected patients, thousands of exhausted medical staff and scarce supply of medicines and other equipment.

The surge has prompted President Rodrigo Duterte to extend lockdown measures in the capital region of Metro Manila and the surrounding provinces of Bulacan, Rizal, Laguna and Cavite until May 14.

On the night of May 3, Duterte received his first dose of China’s Sinopharm vaccine, presidential spokesperson Harry Roque said.

Duterte also said that he was vaccinated to protect his health from COVID-19 and he encouraged the Filipinos to get vaccinated.

Sinopharm's emergency use application in the Philippines is still pending, but the country's food and drugs regulator has approved the "compassionate use" of 10,000 Sinopharm doses for Duterte's security detail.

The vaccine administered to Duterte was covered by the compassionate use permit, said Roque.

Carlito Galvez Jr, chief implementer of the National Task Force Against COVID-19, or NTF, assured that the country has a steady supply of vaccines with around 4 million doses arriving this month. About half of this month’s vaccine delivery will come from Sinovac Biotech.

The Philippines currently has 4 million doses of vaccine. The government target is to inoculate 70 percent of the country’s 108 million population by the end of this year to attain herd immunity. But, only 1.8 million people were vaccinated as of end-April, far short of the government’s target.

Manuel Dayrit, adjunct professor at the Ateneo School of Medicine and Public Health and former secretary of the Department of Health, said the Philippines will need at least 140 million doses to vaccinate 70 percent of the population in the next seven months. And that is based on the assumption that the vaccines that were procured will come as scheduled.

“The (vaccination) target is laudable but the goal seems too optimistic and unreachable given the overall capacity of the health system to roll out the vaccination program,” he said.

Dayrit said Chinese vaccines comprise a significant share of Philippines’ vaccine supply and their early availability enabled the country to start its vaccination program on March 1. But the vaccination rollout has to be accelerated if the government wants to meet its target.

He said health authorities need to “improve on the fundamentals of pandemic control” such as testing, isolation, contact tracing and treatment. These measures can help to stop the viral transmission even if the government fails to hit its vaccination target.

“It is impossible to vaccinate 70 percent of the population at the ongoing rate of vaccination and supply of vaccines,” said Robert Mendoza, national president of the Alliance of Health Workers.

Mendoza estimated that health workers are vaccinating roughly 35,320 individuals per day. At this rate, it would take more than 5 years to vaccinate 70 million Filipinos. He said this calculation has not even taken into account the fact whether the Philippines will receive enough doses given the limited supply of vaccines globally.

Mendoza said the vaccination program can only serve as a “support mechanism” to the country’s battle against the pandemic but it will not solve the problem. The government should instead focus on mass testing, contact tracing, isolation and treatment to reduce the number of infections.

As of May 2, the Philippines had a total of 1.05 million cases, with 8,346 new infections reported that day, according to the latest data from the health department

“Mass testing is not aggressively being implemented and our quarantine facilities are very poor,” he said. Mendoza cited how most public hospitals are now full and have insufficient medicines, ventilators and personal protective equipment.

Gideon Lasco, medical anthropologist and senior lecturer at the University of the Philippines’ Department of Anthropology, said the spike in COVID-19 cases also reflects the “inconsistent policies regarding the opening of the economy, the fact that mass gatherings have continued, some led by government actors and politicians themselves”.

As of May 2, the Philippines had a total of 1.05 million cases, with 8,346 new infections reported that day, according to the latest data from the health department.

He said that in the past few weeks, the government has built 635 health facilities, added 23,241 beds in hospitals, bought 500,000 rapid antigen test kits, and hired more than 14,000 health workers in response to the pandemic.

Dayrit, the former health secretary, said the pandemic has affected the public health system’s capacity to care for critically-ill patients and has stretched the already limited health and medical resources.

“Despite these challenges, there are enough resources to keep hospitals running even at lower levels of capacity to serve patients needing hospitalization. For example, private patients pay hospitals out of pocket for hospital care. Public hospitals are still funded by government budgets,” he said.

Singapore is also aiming to host the World Economic Forum's annual summit in August after it was moved from its usual home in the Swiss ski resort of Davos over virus safety fears.