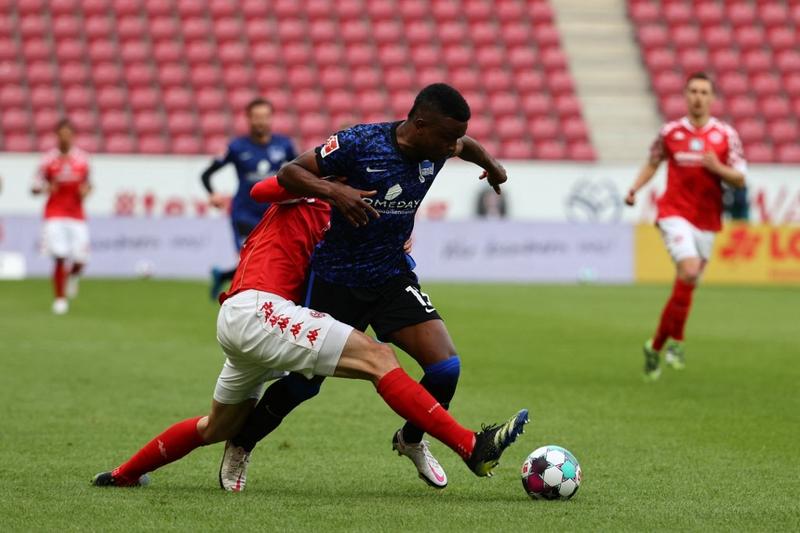 BERLIN - Hertha Berlin missed the chance to clinch vital points in the relegation battle as Philipp Mwene's equalizer canceled out Lucas Tousart's opener to secure Mainz one point on home soil in the rescheduled Bundesliga fixture of the 29th round on Monday.

The Nullfunfer took the reins from the starting whistle and needed no warm-up as Stefan Bell unleashed a dangerous header goalwards with five minutes played before Jean-Paul Boetius rattled the woodwork from a tight angle four minutes later.

Mainz continued wastefully with its chances after Adam Szalai failed to mark the opener with only Berlin goalkeeper Alexander Scholow to beat 20 minutes into the first half.

The visitors from the capital staged an uninspired performance and posed no threat but for all that, they were able to break the deadlock against the run of the flow in the 36th minute when Marton Dardai's free-kick into the box allowed Tousart to nod home.

Berlin's surprising lead lasted only four minutes though as Mwene scored his first Bundesliga goal in style after drilling the leveler from 22 meters into the top right corner.

After the restart, Mainz remained on the front foot but as the game clock ticked the hosts handed over control, allowing Hertha to gain a foothold into the clash.

Mainz's passiveness was almost punished at the hour mark, however, goalkeeper Robin Zentner was on guard and denied Matheus Cunha's promising chance.

Hertha should have had the lead in the closing stages, but Krzysztof Piatek wasn't able to finish off Dardai's good build-up work from very close range.

With the draw, 17th placed Hertha Berlin reduced the arrears to a relegation play-off spot to two points whereas Mainz climbs to the 12th spot after opening up a six-point gap to the drop zone.

"I think the game could have gone in both directions. We are satisfied with the point. My team fought very well. Of course, three points would have been great, but one point is OK," said Hertha Berlin head coach Pal Dardai.

On Thursday, the "Old Lady" clashes with bottom side Schalke in a rearranged fixture from the 30th round.