By Belinda Robinson in New York 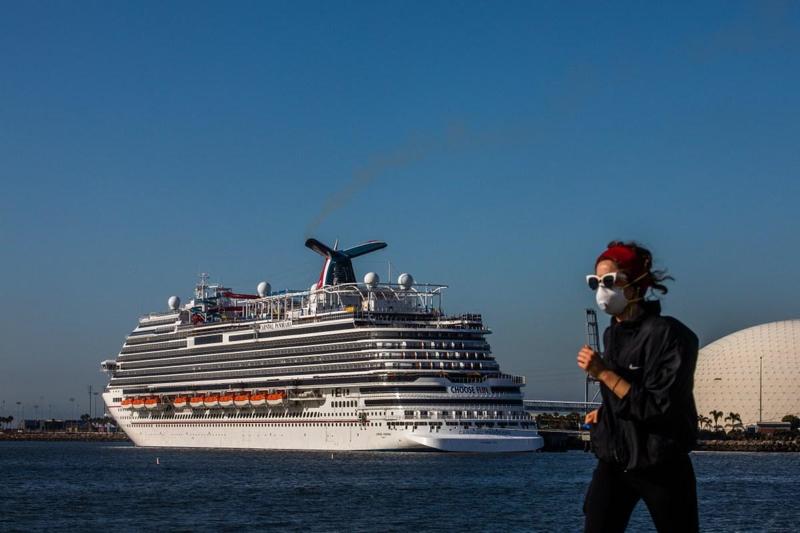 A cruise ship is stuck at the port of Long Beach, California, after a no-sail order was imposed in April last year. Cruise ships may be able to resume sailing from ports in the United States in mid-July. (APU GOMES / AFP)

Cruise lines are cheering word the US Centers for Disease Control and Prevention is committed to resuming sailings in the United States by mid-July and tweaking some of the rules to revive a hard-hit industry.

The CDC said in a letter on April 28 to the industry's leaders that it will let ships cruise without going through practice trips if 98 percent of the crew and 95 percent of passengers are fully vaccinated against COVID-19. The agency also promised a quick review of plans for practice voyages－five days instead of 60－and changes in testing for fully vaccinated people.

Frank Del Rio, CEO of Norwegian Cruise Line, told USA Today that he was hopeful that the letter is a "harbinger of more good things to come".

The CDC said on April 29: "We remain committed to the resumption of passenger operations in the United States following the requirements in the CSO (conditional-sail order) by mid-summer, which aligns with the goals announced by many major cruise lines."

Cruises were some of the first super-spreaders for the coronavirus in 2020. In October, the CDC issued the CSO to remain in effect until November 2021, requiring all ships to conduct test cruises and apply for a certificate at least 60 days before offering passenger cruises.

The CDC, in my view, was right to move cautiously, and phased approaching is correct.

Joe Allen, an environmental health expert at Harvard's T.H.Chan School of Public Health, studied the outbreaks on cruise ships last year, including the Diamond Princess, where more than 700 people were infected, and 14 died.

"The CDC, in my view, was right to move cautiously, and phased approaching is correct," he told National Public Radio. "It's hard to imagine the CDC prioritizing cruise ships right now when we still have some schools that are closed."

But the industry has accused the CDC of treating it differently to other hospitality sectors.

Christine Duffy, president of Carnival Cruise Line, threatened in April to take the company's vessels out of the US and begin sailing from foreign ports if the CDC didn't do more to restart the industry.

Coastal Florida is the country's biggest home to the cruise line industry, and on April 8, Governor Ron DeSantis sued the agency, demanding cruises be "reopened immediately".

The suit asked that the CSO be declared unlawful because cruise lines "are on the brink of financial ruin" and should be able to operate with "reasonable safety protocols".

Alaska joined the lawsuit. State Attorney General Treg Taylor said in a statement that the "CDC simply does not have the authority to arbitrarily shut down an entire industry".

Prior to the pandemic, about 60,000 south Floridians worked in the industry. Many lost their jobs or have struggled when the industry was forced to halt operations.

A report from the Federal Maritime Commission said that during the first six months of the pandemic, the halt in cruises cost Florida an estimated US$3.2 billion in losses, including 49,500 jobs that paid US$2.3 billion in wages.