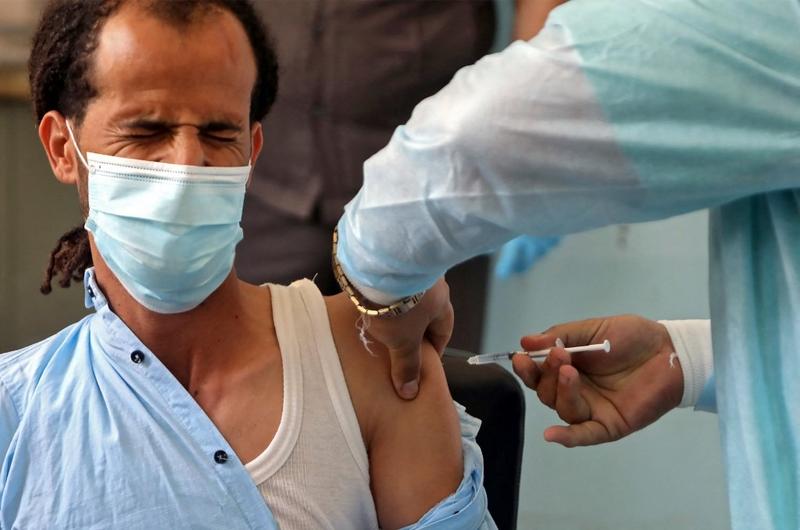 A Yemeni health worker receives a dose of the AstraZeneca COVID-19 vaccine at a vaccination centre in Yemen's third city of Taez, on April 21, 2021. (AHMAD AL-BASHA / AFP)

In al-Thawra hospital in the disputed Yemeni city of Taiz, a nurse with no face mask or protective gear inoculates the few people who have shown interest in the COVID-19 vaccine.

There has been a dramatic spike in infections in Yemen this year, straining a health system already battered by war, economic collapse and a shortfall in aid funding

She picks an AstraZeneca vial from a cooler box, warms it with her hands and invokes the name of god before injecting the shot into a man's left arm.

Yemen has received 360,000 doses from the global COVAX vaccine-sharing scheme, yet many Yemenis seem reluctant to get inoculated on religious grounds, due to distrust of the vaccine, or because of the dangers of war.

"We have received 70,000 doses in Taiz and we started the vaccination campaign on April 21," Rajeh al-Maliki, head of Yemen's health ministry in Taiz.

"We can fairly say that there is very little interest ... we have distributed around 500 shots since we started, it is less than we expected," Maliki said.

There has been a dramatic spike in infections in Yemen this year, straining a health system already battered by war, economic collapse and a shortfall in aid funding.

The Iranian-aligned Houthi movement, which controls most of northern Yemen and parts of Taiz, has been battling the Saudi-backed government since 2014. Tens of thousands have been killed and millions rely on aid to survive. 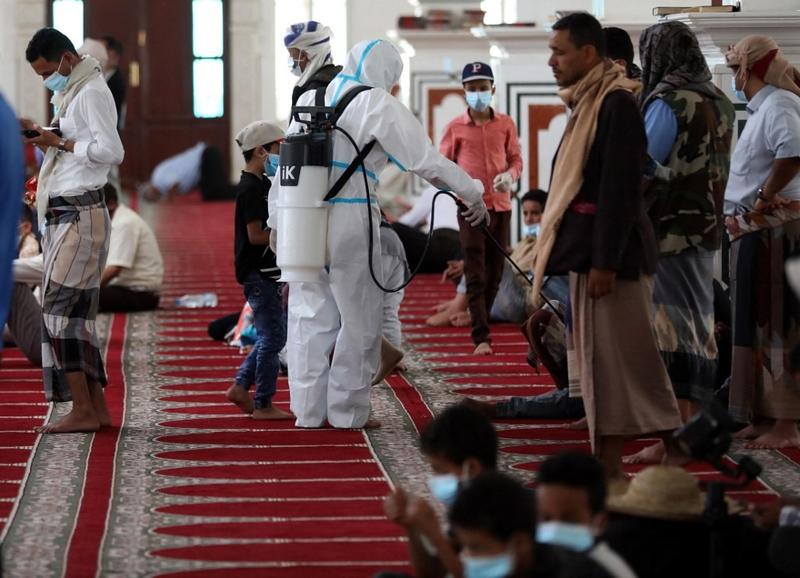 A worker sprays disinfectant as mask-clad Muslims gather for the noon prayers during the holy fasting month of Ramadan inside a mosque in Yemen's third city of Taez, on April 17, 2021. (AHMAD AL-BASHA / AFP)

Maliki and other doctors said many Yemenis, including medical staff, believe the vaccine would break their fast during the holy month of Ramadan.

Checkpoints and snipers in the heavily militarised city make it impossible for many residents to reach hospitals, they said.

People living in Houthi-controlled neighbourhoods have to travel around 50 km to avoid front lines and reach the main government-controlled hospital.

"I got infected by coronavirus, I took natural herbs and spices that our ancestors used. I was well again," said Ali Abdou, a 55-year-old Taiz resident.

"We work very hard with our bodies and it gives us strong immunity, one of us dies only when his time has come. Those rare diseases only affect the rich and we are not among them," Abdou said.

Mohammed Muthana, another resident, said he will wait until officials and doctors take the vaccine before he can trust it.

In al-Thawra hospital, doctor Sarah Damaj has been trying to convince Yemenis the vaccine is safe and does not break the fast.

"People are afraid because there is a lot of misinformation out there, especially on social media," she said.