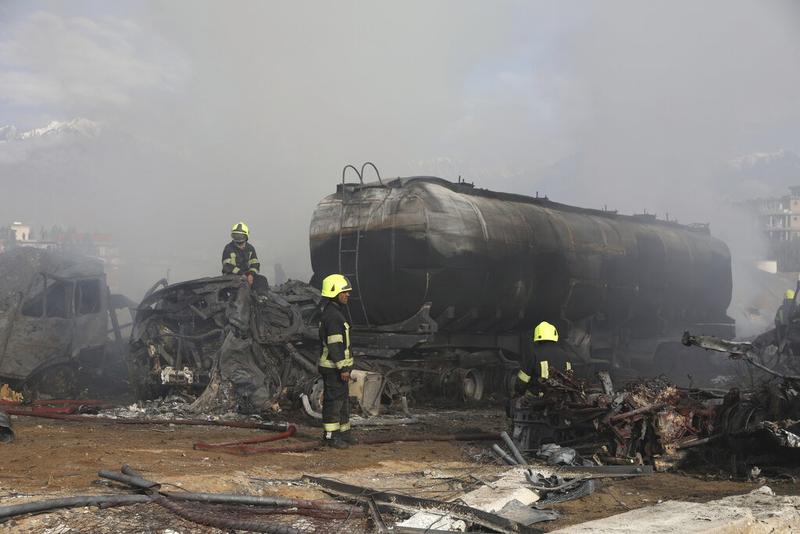 KABUL－Fighting between Afghan government forces and the Taliban has left more than 100 insurgents dead in just 24 hours, the Afghan Defense Ministry said on Sunday as it took control of a key operating US military base.

The US military handed over Camp Antonik in the restive southern province of Helmand to Afghan forces, a day after it formally began withdrawing its remaining troops from the country.

The Taliban and government forces clashed across several provinces, the ministry said, including in the former insurgent bastion of Kandahar where the US military carried out a "precision strike" on Saturday as it began the final troop pullout.

Another 52 Taliban fighters were wounded, the ministry added, without giving details of any casualties suffered by government forces.

The Taliban did not offer any comment on the fighting, but according to the Agence France-Presse, both sides are known to exaggerate casualties inflicted on the other

General Mark Milley, the chairman of the US Joint Chiefs of Staff, said on Sunday that Afghan government forces face an uncertain future and, in a worst-case scenario, some "bad possible outcomes" against Taliban insurgents as the withdrawal of US and NATO troops accelerates in the coming weeks.

He said there is "at least still the possibility" of a negotiated political settlement between the government in Kabul and the Taliban. This, he said, would avoid the "massive civil war" that some fear could happen.

Fighting on the ground has continued unabated in recent months as peace efforts aimed at ending the 20-year conflict have faltered.

The US military formally began withdrawing its remaining 2,500 troops from the violence-racked country on Saturday, as ordered by US President Joe Biden last month.

About 7,000 NATO troops will also be withdrawn from the country.

Afghan officials said all foreign troops were being taken to Bagram, the biggest US base in Afghanistan, and from there they would leave to their respective countries.

The US military's handover of Camp Antonik to Afghan forces was part of the drawdown, the Afghan Defense Ministry said. Helmand, notorious for poppy growing, is a known Taliban stronghold.

It said the base will be used by Afghanistan's special forces.

The US military has handed over several bases to Afghan forces since Washington signed a landmark deal with the Taliban last year that paved the way for the withdrawal of foreign forces.

The deal signed in February 2020 under the administration of then-US president Donald Trump stipulated that all foreign forces would be withdrawn by May 1 this year.

Biden announced in April that the last remaining 2,500 US troops would instead be withdrawn by the 20th anniversary of the Sept 11,2001, attacks and not by May 1. He said their withdrawal would start on May 1.

The trucks were parked in northern Kabul and became engulfed in flames. Fourteen people were injured.

Tariq Arian, a spokesman for the Ministry of the Interior, said authorities were still investigating how the fire started, but he ruled out a "terrorist incident".

Two security sources had earlier said they believed it was caused by a Taliban rocket fired in the area. But Taliban spokesman Zabihullah Mujahid has said they were not involved.

The city remains on high alert, with officials bracing for attacks from the insurgent Taliban over the continued presence of foreign troops in the country.