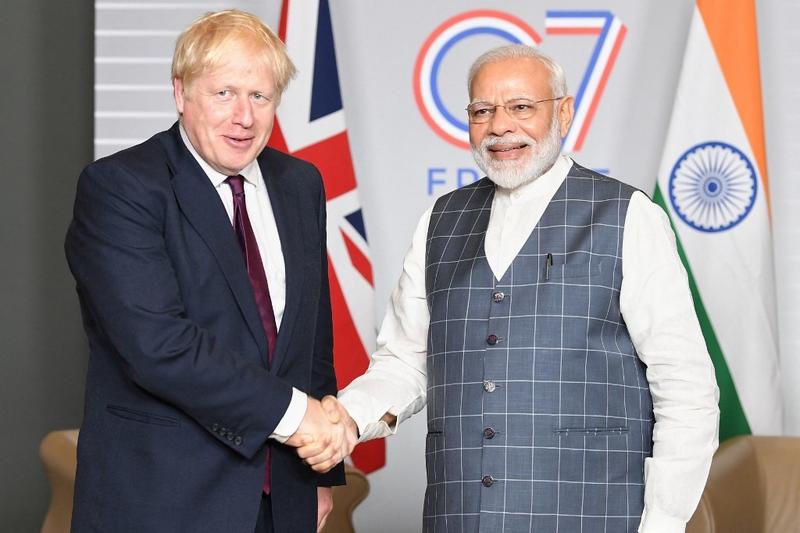 In this photo taken on August 25, 2019 by the Indian Ministry of External Affairs, Indian Prime Minister Narendra Modi shakes hands with British Prime Minister Boris Johnson on the sidelines of the annual G7 summit in Biarritz, south-west France. (PHOTO / AFP)

Britain and India announced 1 billion pounds (US$1.39 billion) of private-sector investment and committed to seek a free trade deal ahead of a virtual meeting between Prime Minister Boris Johnson and Indian leader Narendra Modi on Tuesday.

The meeting replaces an in-person visit Johnson had planned to make last month to deepen cooperation as Britain seeks new trading partners after leaving the European Union. That visit was cancelled due to surging COVID-19 cases in India.

"Like every aspect of the UK-India relationship, the economic links between our countries make our people stronger and safer," Johnson said in a statement.

The meeting replaces an in-person visit Johnson had planned to make last month to deepen cooperation as Britain seeks new trading partners after leaving the European Union. That visit was cancelled due to surging COVID-19 cases in India

The British government set out 533 million pounds of Indian investment into Britain, including 240 million by the Serum Institute for its vaccines and sales business, and 446 million pounds of export deals for British businesses.

Some of the investments listed had already been made public.

British estimates combined with data from the firms involved, showed the deals would create more than 6,500 jobs in Britain.

The two countries will also finalize an 'Enhanced Trade Partnership' that will lift export barriers on goods ranging from British apples to medical devices, and took steps to open up India's legal services sector to UK firms.

The partnership deal is seen as a step towards a full free-trade agreement that Britain hopes will by 2030 double bilateral trade from its current level of around 23 billion pounds per year.

"In the decade ahead, with the help of new Partnership signed today and a comprehensive Free Trade Agreement, we will double the value of our trading partnership with India and take the relationship between our two countries to new highs," Johnson said.