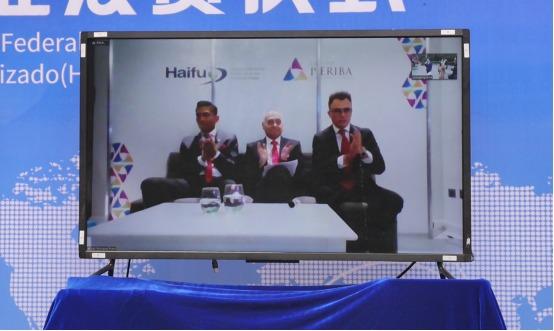 In this undated photo, representatives from Mexico attend the delivery ceremony of HIFU machines. (PHOTO / LIANGJIANG.GOV.CN)

A new chapter in health cooperation between China and Mexico will be inscribed in the first week of May, as cancer patients in Mexico will likely receive treatment using an innovative Chinese technology featuring noninvasive high-intensity ultrasound.

Chongqing Haifu Medical Technology, a company headquartered in Chongqing, is deploying ultrasound machines in Mexico to help change the way physicians there deal with solid tumors in cancer patients from the country and throughout the Americas.

The medical technology company is currently recruiting patients as a first step into the entire region.

"This technology is being used in 29 countries around the world, like Germany, Italy, Spain and Japan, in the best hospitals of each region," noted Saul Rodriguez, a physician and specialist in high-intensity focused ultrasound, or HIFU, technology.

Cancer is a big issue in Mexico, which has a population of about 127 million.

Chongqing Haifu Medical Technology, a company headquartered in Chongqing, is deploying ultrasound machines in Mexico to help change the way physicians there deal with solid tumors in cancer patients from the country and throughout the Americas

There were 190,667 cases in the country in 2018 and 83,476 deaths from the disease, according to the Pan American Health Organization.

"It is a relevant technology to assist in the care of cancer patients, making it more feasible to eliminate the cellular activity of the malignant tumor and thereby limit the progression of the disease."

HIFU techniques are used in tissue ablation, a minimally invasive procedure used to destroy abnormal tissue without damaging the surrounding or overlying tissues around cancer tumors.

The Haifu company's project in Mexico is starting in San Andres de Cholula, in the state of Puebla, about 130 kilometers southeast of Mexico City, the capital.

In Mexico, Haifu's technology has "high growth potential in the care of malignant and benign tumors, due to the high incidence and prevalence of oncological diseases and the progression of noninvasive procedures that replace the usual surgical procedures in the care of benign and malignant tumors", Rodriguez said.

"The high intensity, focused ultrasound system is capable of destroying benign and malignant tumors located in the pancreas, bone, breast, uterus and liver."

The intention is to expand Haifu's technology from Mexico to the rest of Latin America, where the potential benefits are enormous. Cancer was the second leading cause of death in the region before COVID-19 emerged, according to the Pan American Health Organization. Even after COVID-19 is dealt with, cancer will remain a significant challenge.

The Chinese technology was first launched domestically in the 1990s and has since been exported to more than two dozen countries. It is a noninvasive technology that can also help patients spend less time at hospitals and avoid the sometimes severe side effects caused by chemotherapy and radiotherapy, two more traditional methods used to treat cancer.

Reducing exposure times at clinical facilities is of particular importance at this time when countries are dealing with surges of COVID-19.

"It is a treatment without bleeding, without a scalpel, without risk of infection, with a fast recovery and completely new in North America," said Dr Efren Cabrera, another specialist in Haifu's technology.

"In the treatment of benign tumors, (it) is practically an outpatient treatment and in the treatment of malignant tumors, in a maximum of 24 hours the patient can go home, which considerably reduces vulnerability to any bacterial or viral infection."

The technology has also been available in Argentina since 2017, but its use there has been limited.

With Mexico gaining access to the technology, it could also benefit United States patients who may cross the border in search of medical alternatives.

"Advances in communication technologies and their applications in the field of medicine allow us to build remote care systems that will facilitate access to treatment for the foreign population," added Rodriguez.

"It is a medical device with great global competitiveness," said Armando Gu, Haifu's manager for Latin America, during the inauguration ceremony of the Tumor Ablation Medical Center in Mexico.

With Mexico having the first private clinic in the Americas that uses Haifu's technology, the company will be able to prove the clinical and commercial value of its technology and benefit millions of people across the region, Gu said.