Fashion for a noble cause

Companies, organizations and Shanghai Fashion Week band together to help women from rural areas improve their lives through embroidery 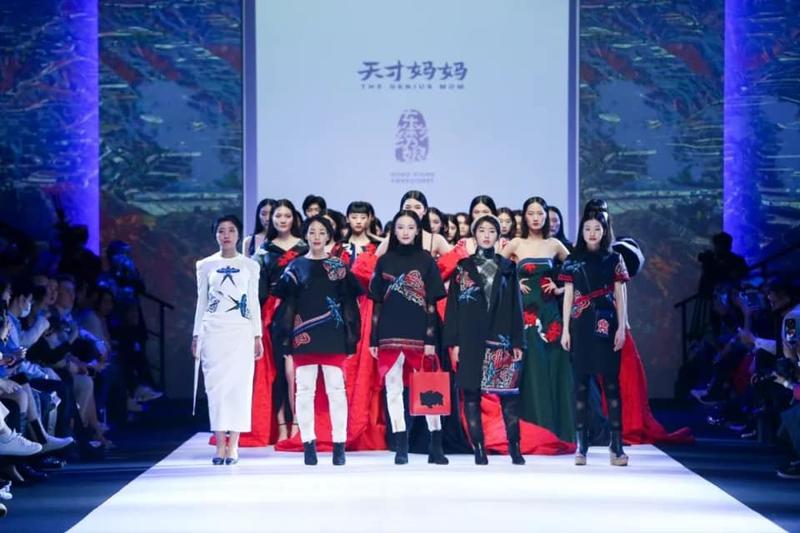 One fashion show that took place on April 13 during the 2021 Autumn/Winter Shanghai Fashion Week was a little more unusual than the others.

Together with professional models, five women embroiderers took to the catwalk to showcase more than 400 embroidered patches that were made by embroiderers from Dongxiang county, an underdeveloped area in Gansu province.

The show, which was launched by the China Women's Development Foundation, Country Garden Holding, Guoqiang Foundation, UCCA Center for Contemporary Art, and the Shanghai Fashion Week Committee, was part of efforts to help women in rural areas and promote the inheritance and innovation of intangible cultural heritage handicrafts.

Besides the fashion show, an art exhibition that displayed nine representative intangible cultural heritage handicrafts in China, including embroidery from Dongxiang, batik from Guizhou province, and Qiang embroidery from Sichuan, was also held in Shanghai from April 10 to 15.

"When we first saw these embroiderers in Dongxiang, they hid inside rooms because they were shy of seeing strangers. I am so happy to see them confidently showing off our traditional styles through a fashion show," said Luo Jinrong, deputy director of Guoqiang Foundation. 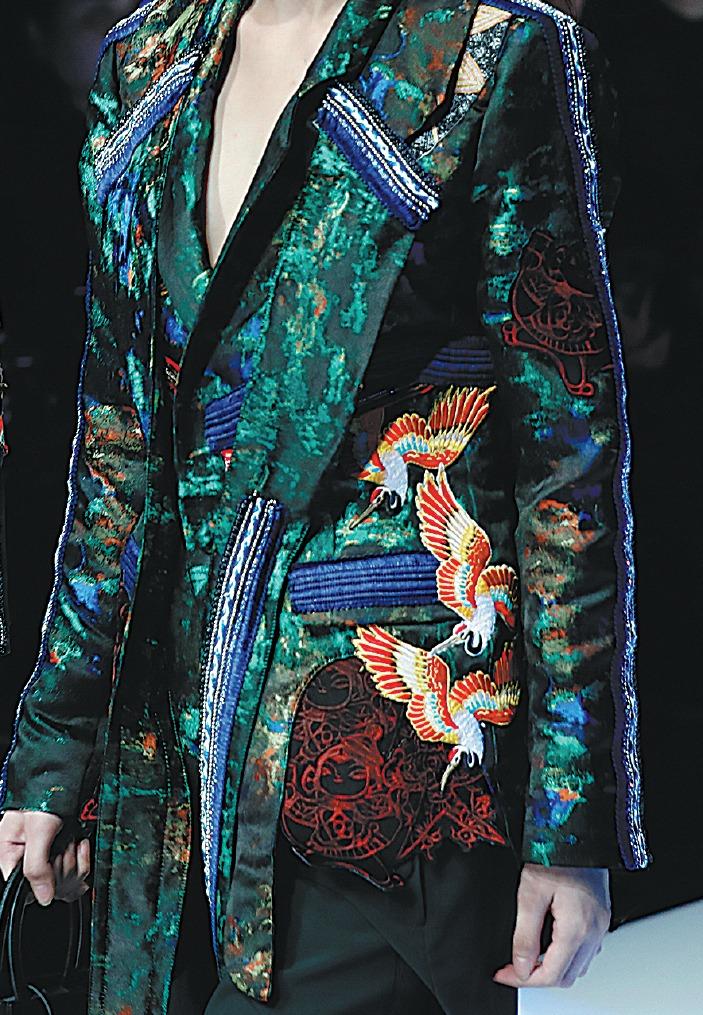 Embroidered patches made by embroiderers from Dongxiang county are highlights of the fashion show. (PHOTO PROVIDED TO CHINA DAILY)

According to Luo, the foundation helped to conduct 20 embroidery training sessions in Dongxiang last year. About 1,000 embroiderers benefited from this initiative.

The foundation had on April 13 also donated 10 million yuan (US$1.54 million) to the China Women's Development Foundation to support women embroidery projects in Dongxiang county.

According to Dong Kui, deputy secretary-general of the China Women's Development Foundation, the industrial hub that was built by the foundation in 2020 has helped nearly 1,000 women in Dongxiang raise their income levels through the sales of about 100,000 pieces of embroidery.

The foundation has also sought to improve the lives of women in rural areas who have had to leave their families behind to seek employment in more developed areas due to a lack of opportunities in their hometowns. Through the 10 workshops and two intangible cultural heritage experience centers constructed by the foundation, women from nine provinces can now do embroidery work while caring for their families, thus raising their income levels and quality of life. 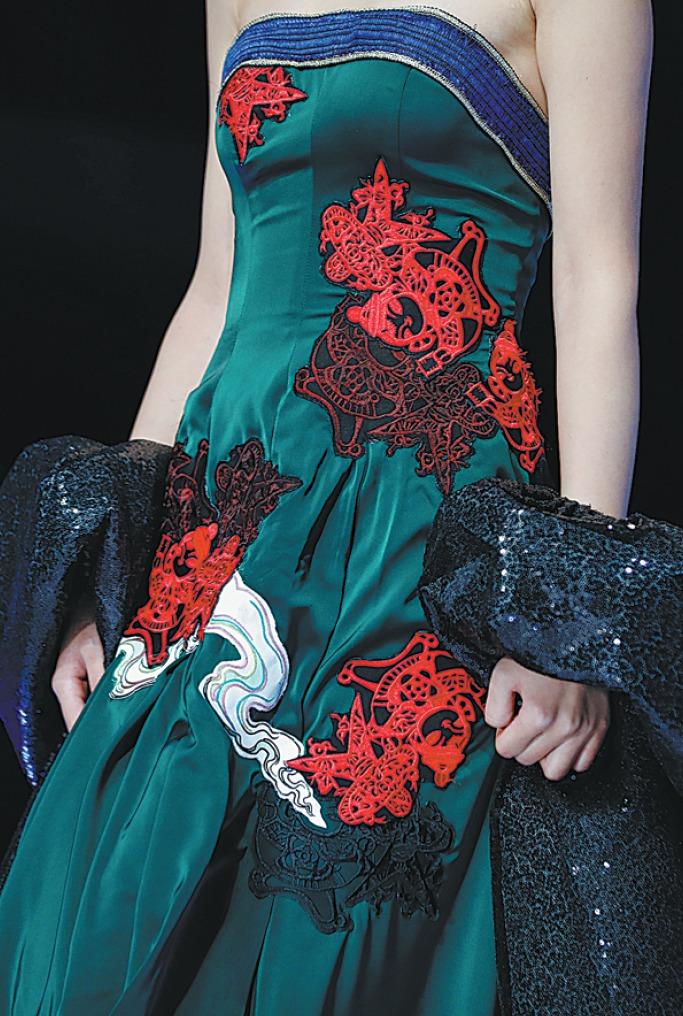 Embroidered patches made by embroiderers from Dongxiang county are highlights of the fashion show. (PHOTO PROVIDED TO CHINA DAILY)

Among the beneficiaries of this project is Yanger Baolang, a 46-year-old who lives in Danzhai, a small county in Guizhou province with 21 minority groups.

According to her, nearly 60 percent of the women in Danzhai have to leave their homes to find work to sustain their families.

Besides helping enhance livelihoods, this project has also raised the profile of batik. Yanger, who now is the leader of the Genius Mom Danzhai Batik Workshop, pointed out that people in her hometown once thought batik was only used to make daily necessities. But after Chinese conglomerate Wanda Group established the tourist attraction Danzhai Wanda village, more and more people have gotten to know about the unique characteristics of the fabric through a local batik showroom and experience center. The tourist center also gives visitors small gifts that are made of batik to promote the fabric.

So far, the living conditions of about 400 poor families have been elevated as more and more women follow in Yanger's footsteps to earn an income through batik embroidery.

"Most of us are Hmong women aged between 40 to 60 and with little education, and many cannot speak Mandarin," said Yanger.

"Because of this initiative, we can now talk and laugh while working in our hometowns together. Our living conditions have improved a lot, too." 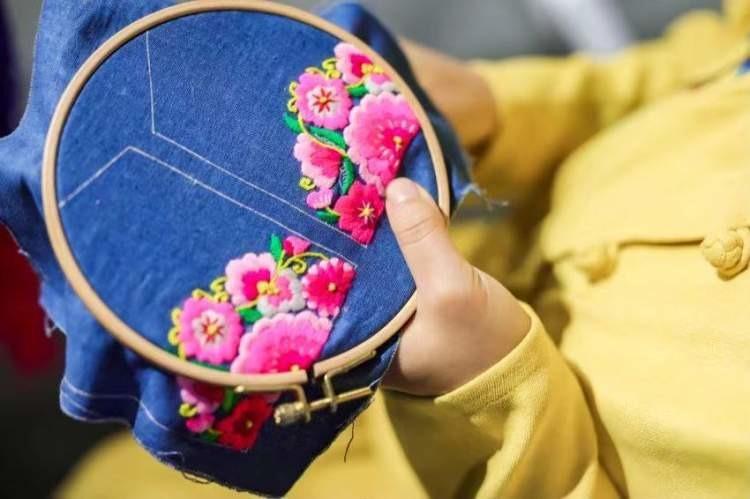 When asked if automation might soon make embroiderers like her redundant, Yanger said that there is no machine that can completely handle the task, noting that processes like waxing and drawing cannot be done by machines.

What she is most concerned about is passing down the skills of this intangible cultural heritage.

"I want to let more people understand the production of batik and to pass on these skills. More importantly, I want women in Danzhai to live better lives," she said.

Jin Xinyi contributed to this story.