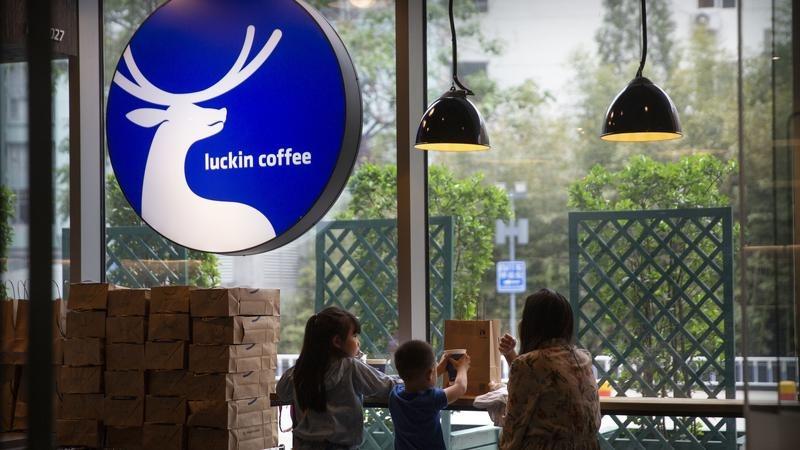 In this May 18, 2019 photo, customers sit inside a Luckin Coffee shop at a shopping center in Beijing. (MARK SCHIEFELBEIN / AP)

Competition is becoming intense in the ready-to-drink coffee segment with a flurry of brands coming up with high-end and locally-adapted flavors to win more consumers in the Chinese market.

Available in cold-brew latte and Americano coffee flavors, the products come with variants such as low-sugar, low fat, sugar free and fat-free

The new range, which is available in e-commerce platforms and offline retail outlets across the country, is designed to "restore the quality and taste of cold-brew coffee brewed at brick-and-mortar stores" despite being in bottles, according to the company.

Available in cold-brew latte and Americano coffee flavors, the products come with variants such as low-sugar, low fat, sugar free and fat-free. The brand is now looking to cash in on the growing demand for healthy food products among urban consumers in China.

Costa officials said the company decided to launch the new range after its first batch of RTD coffee products, launched last year, received good market response. The products have been brewed keeping in mind the taste preferences of Chinese consumers aged between 18 and 35, the company said.

Company officials said that being a part of the Coca-Cola family has given Costa Coffee a natural access to Coca-Cola's massive retail distribution channels. Till date, Costa Coffee's RTD products are available in more than 150,000 retail locations including supermarkets and convenience stores in the country.

"Chinese consumers have high expectations on innovations in the coffee sector. We believe that local innovation is a major driving force for the sector's growth," said a senior official of Costa Coffee China, who did not want to be named.

This year, Nescafe's new coffee beverage has been upgraded further in terms of taste innovation, combining the freshness of sakura with the dessert flavor of soufflé and bringing multi-sensorial tasting experiences

This year, Nescafe's new coffee beverage has been upgraded further in terms of taste innovation, combining the freshness of sakura with the dessert flavor of soufflé and bringing multi-sensorial tasting experiences.

In recent years, Nescafe has entered a "blowout" innovation stage focused on the Chinese market, aiming to fulfill the individual needs of various consumers with varied tastes and enriching the daily lives of consumers.

Since entering the Chinese market in the 1980s, the coffee brand has gradually cultivated the habit of drinking coffee among Chinese people.

Adrian Ho, senior vice-president of the coffee business unit for Nestle in China, said: "We believe that high-quality food and beverages have the power to improve people's quality of living and support sustainable lifestyles.

"During the pandemic, we have continued to provide trustworthy food, beverages and health solutions for people all over the world."

To provide an upgraded consumer experience, the bottled coffee beverage has cooperated with Tatsuro Kiuchi, a renowned Japanese artist.

Besides designing the product appearance and creating a sakura series of limited edition accessories to creating sakura season interior designs featured in subways as well as Lawson and FamilyMart outlets in Wuhan, capital of Hubei province, where sakura is one of the signature travel attractions, Tatsuo Kiuchi has made efforts to bring the immersive atmosphere of spring sakura blossoms to life for consumers, said Nestle.

"The new product is expected to generate significant buzz across Chinese social media," said the company.

The Chinese coffee market is one of the most innovative markets in the world, according to data from Euromonitor International, a leading provider of strategic market research.

According to data from Euromonitor International, the domestic RTD coffee market is expected to exceed 14.9 billion yuan ($2.30 billion) this year.

In China, per capita coffee consumption volumes are far lower than the mature markets in the United States, South Korea and Japan.

In the case of the RTD sector, the potential is massive.

Three trends－black coffee, premium and multiple flavors are driving the rapid growth of RTD coffee in the Chinese market, according to Ipsos, a global marketing research institute.

"Costa Coffee has strong confidence in the prospects of Chinese coffee market, in China and the Chinese economy. In the next five years, Costa plans to expand its new on-premise coffee stores, cover national markets with RTD coffee retail points and strengthen online family occasion coffee access," according to the unnamed Costa's official.

According to Mintel China's report on the RTD coffee market in the country, which was released last year, despite being a predominantly tea-drinking nation, China's coffee market has seen steady growth over the years.

Looking ahead, the RTD coffee sub-category's retail market value is expected to outperform the category with an estimated annual growth of 18.1 percent to reach 11.5 billion yuan by 2023.

The entire category, buoyed by expected growth in RTD and fresh coffee, is expected to have an annual growth of 12.3 percent and reach 29.2 billion yuan by 2023.

Three factors that will likely drive growth in the RTD coffee sub-category are growing interests in coffee consumption, demand for "fast solution" to save time in preparing and consuming coffee, as well as premiumization of products, according to the Mintel report.

Among the leading RTD coffee brands, Nestle controls the RTD coffee market in China with a 45.5 percent market share as of 2017.

In contrast, the next two RTD brands lost ground in 2017, with number two Uni-President Coffee ceding 2.3 percent to 12.2 percent, while the third placed Suntory lost 1 percent to 10.3 percent.

With Nestle's market share close to four times that of its closest competitor, a major shuffle is unlikely in the next few years, it said.

Annie Yao, account director of Mintel China, said: "Consumers are becoming increasingly concerned about what goes into the products they consume, and brands that focus on natural goodness without added sugars will reap the benefits."

Yao said the challenges are that new entrants, particularly established brands from other categories, are blurring the boundaries of the RTD tea and coffee categories.

"It's not hard to see how spring and mineral water brands can pose a threat," she said.

For example, Nongfu Spring has leveraged its association with premium-quality water sources to enter the tea market with its "Oriental Leaf" products.

Other entrants may enter with a functional angle. For example, snack brand Three Squirrels launched their first beverage product Second Brain with medium-chain triglycerides, protein and dietary fiber, which are said to be good for the brain.

The key question is whether the entrance of other players will increase and stimulate consumption, thereby growing the pie for everyone, said Yao.