By Bo Leung in London 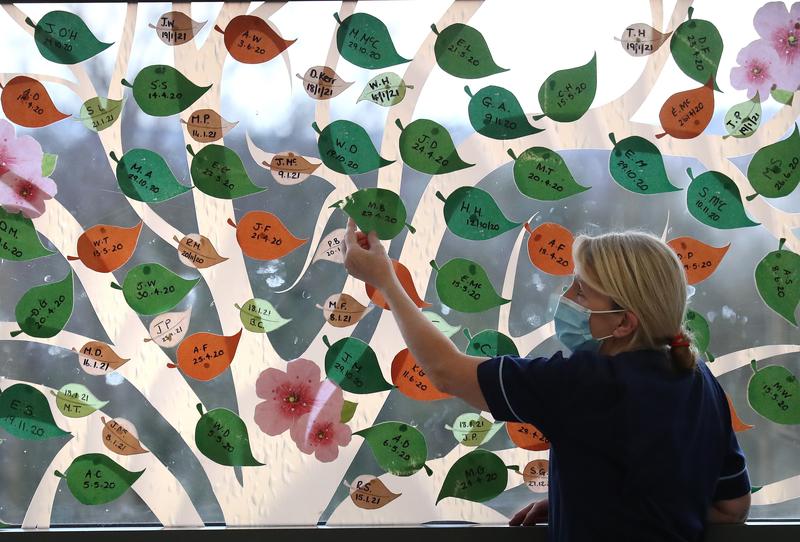 A nurse looks at a Remembrance Tree mural which has been installed at Forth Valley Royal Hospital in Larbert, Scotland, on Jan 29. Green and amber leaves with initials and dates for all patients during the COVID-19 pandemic have been placed on to the branches; green representing those who recovered and returned home, amber remembering those who lost their lives. (ANDREW MILLIGAN / FOR CHINA DAILY)

As the United Kingdom grappled with the COVID-19 pandemic, Anne realized she was at her breaking point during one of her work shifts.

The pandemic has taken a toll on the 24-year-old nurse. Like many National Health Service frontline workers battling the crisis, the pressure has affected them physically and mentally. Due to the sensitivity of the matter, Anne has requested that her real name and workplace be kept confidential.

Anne had been working at the intensive care unit of a busy hospital in the east of London for more than a year when the first wave of the pandemic hit. Wards were transformed into ICUs to cater to COVID-19 patients. Some rooms that usually accommodate four patients each now have to provide for six.

Like many hospitals across the world, the crisis far exceeded the current capacities of hospitals and ICUs.

"You'd enter the room and they would all be prone, sedated and paralyzed on maximum respiratory support, renal replacement therapy. Some requiring up to 12 continuous IV infusions. Video calls with family on iPads were propped up against their beds," she said. "We were all running on adrenaline when the first wave hit. This obviously didn't last forever."

The increased workloads for NHS frontline workers have been relentless and caring for patients under extremely difficult circumstances is not ideal either.

By December, Anne described the situation as "hell on earth".

But as more and more patients continue to be admitted to hospital, Anne said they were treating three to four patients at the same time.

She said they were not able to deliver the level of care they used to give or should be giving.

"This means missing out on vital information for one of your rapidly deteriorating patients while you run blood gas for another... We could no longer do 4-hourly rolls or daily bed baths ... let alone oral care," she said. Hourly rolls refer to repositioning of a patient so that they do not get bed sores. "You were just putting out fires wherever you looked and trying to keep everyone alive."

Anne also had to take charge of redeployed medical workers from other departments drafted in to help the COVID-19 ward despite being fairly new to the job herself, which she said was overwhelming.

It would become too much for some of the redeployed workers, and they would leave or go home early, leaving her alone to care for the patients.

She recalled one night shift where she had no respite from her heavy workload, as well as dealing with the unprecedented levels of illness and death.

"My patient was dying, I called the family at 3 am and she died at 4 am with no one beside her," she said.

A few hours later, Anne was ringing the relatives of a second patient who was close to dying, asking the family to come in.

More than 127,000 people have died of COVID-19 in Britain since the pandemic began.

Though Anne and her colleagues are doing all they can despite the exhaustion, they still feel a sense of guilt, thinking they could have done more.

"You just feel so guilty for not being able to carry out your job to the best of your abilities, but you literally can't and are fighting a losing battle," she said. "New shifts turn up and I felt sorry for them. You stay behind a couple hours longer to help out and it felt like it was just getting worse. That day after work I didn't sleep, I had a breakdown."

The pressure on ICU staff has been particularly high, working in areas where the perceived risk of COVID-19 exposure is high for long periods, fear of transmission to family, and there is illness or death among friends and colleagues.

Anne felt she needed to go into work otherwise she would be letting her team down. But in January, she was having suicidal thoughts.

"That's when I told work I couldn't go back in and got signed off by my doctor," Anne explained, adding she was having constant anxiety, crying frequently at night and having flashbacks of working in the COVID-19 ward.

Anne is just one of many other frontline healthcare workers across the world dealing with mental health trauma.

Research published in the March edition of scientific journal PLOS One found that more than one in five healthcare workers experienced anxiety, depression, or post-traumatic stress disorder during the pandemic.

The paper looked into 65 studies surveying 97,333 health workers across 21 countries. It identified a high prevalence of moderate depression, anxiety and PTSD among healthcare workers during the COVID-19 pandemic.

The study found that healthcare workers in the Middle East suffered from the highest rates of anxiety and depression.

A separate study revealed that healthcare workers in Italy experienced high levels of psychological distress and they may be at risk for future psychological health related consequences. Italy was badly hit by the virus during the first wave of the pandemic.

According to a Reuters report, psychiatrists at the Mount Sinai Hospital in New York City predict that 25 to 40 percent of frontline healthcare workers and first responders in the US may suffer from PTSD as a result of their involvement in the pandemic. 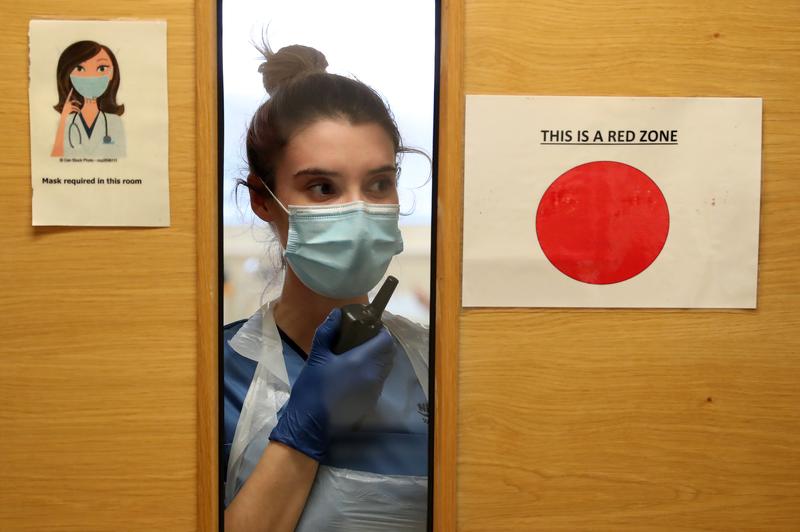 A nurse communicates using a walkie talkie from a COVID-19 area at Forth Valley Royal Hospital on Jan 29. (ANDREW MILLIGAN / FOR CHINA DAILY)

After taking a month off work and taking up running every day, Anne said she slowly felt better and was looking forward to working and seeing her team again.

However, upon returning to work, the situation became overwhelming as she found herself crying and hyperventilating after being assigned to look after two end-of-life patients.

A colleague noticed her distress and offered to take over her patients.

"I then spoke to a psychologist in our unit. She said I could be suffering from moral injury or post-traumatic stress disorder," she said. "Occupational health had been very helpful. They recommended that I start on antidepressants and get a referral for trauma talking therapy.

"My self-esteem is broken, but I feel like my voice has been heard now. I made my manager and the matrons aware of how I was feeling and they have been very supportive. It feels like I have a choice now," she added.

Research from King's College London found that nearly half of ICU medical workers are likely to meet the threshold for PTSD, severe anxiety or drinking problems during the COVID-19 pandemic.

The study, which was published earlier this year, revealed that poor mental health was common in many ICU clinicians, though they were more pronounced in nurses than in doctors or other healthcare professionals.

Neil Greenberg, lead author of the study, said that the severity of symptoms identified is highly likely to impair the abilities of some ICU clinicians to provide high-quality care, and it can negatively impact their quality of life.

"The high rate of mortality amongst COVID-19 patients admitted to ICU, coupled with difficulty in communication and providing adequate end-of-life support to patients, and their next of kin because of visiting restrictions, are very likely to have been highly challenging stressors for all staff working in ICUs," he said.

The college surveyed 709 healthcare workers in nine ICUs in the UK during the first wave of the pandemic. Some 45 percent reported symptoms consistent with a probable diagnosis of PTSD, severe depression and anxiety.

More than one in eight respondents reported frequent thoughts of being better off dead, or of hurting themselves.

"Evidence-based mechanisms should be in place so all healthcare workers, including ICU staff, can promptly access treatment for mental health issues," Greenberg said. "If we protect the mental health of healthcare workers during the COVID-19 pandemic, staff will be better able to sustainably deliver high-quality care to the large numbers of patients seriously unwell with COVID-19."

As frontline workers are pushed to the brink during the crisis, the NHS announced in February that 40 dedicated support hubs will open across the country to help those struggling with their mental health during the pandemic.

Paul Farmer, chief executive of mental health charity Mind, said the last 12 months have been tough for NHS frontline workers. He stressed the importance of workers being able to get help and support for their mental health.

"Even before the pandemic, many healthcare staff told us they were struggling with things like long and unsociable working hours and excessive workloads were taking a toll on their mental health," Farmer said. "The coronavirus outbreak has caused unprecedented challenges, including having to make even more difficult life and death decisions, dealing with bereavement, risking their own health and that of their loved ones every day in order to help protect others and save lives."

NHS workers are encouraged to use the dedicated hubs where they can access services over the phone with onward referral to online and one-to-one expert help from qualified mental health therapists and psychologists.

Claire Murdoch, the NHS national mental health director, said it is vital that the frontline workers are given additional support as they play a big role in getting the country through the pandemic.

"NHS staff are used to dealing with the extremes of life on a daily basis, but this year has been exceptional, and in what is likely to be the toughest year in their careers," she said. "Staff have put their minds and bodies to the limit treating hundreds of thousands of seriously ill patients with COVID-19."

Anne is now on leave from work for the second time and is not back at work yet. It is something she still feels anxious about, but her time off has given her the chance to recuperate while she decides when she is ready.

She said those who feel the pressure should not go through it alone.

"If you are suffering, just tell someone you trust. I got into a cycle where I was forcing myself to go into work when it was killing me inside," she said. "Your career shouldn't consume you because at the end of the day, you are just a number that can be filled."